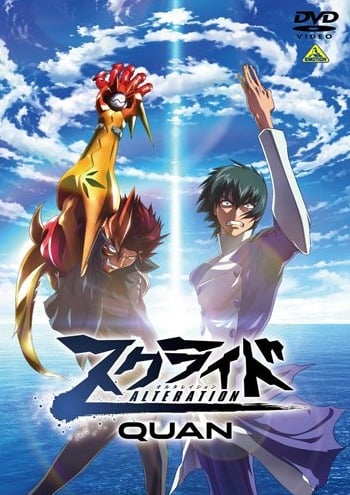 This will be a review for both movies as they are the complete story, one just following the other. First and foremost, if you haven't watched the series, stop now and go watch it. It's only 26 episodes start to finish and you will be glad you did. On to the "Alteration" it's self. I can only assume that when Sunrise started to make "S-CRY-ed Alteration" they were originally thinking to do what Studio Khara & Gainax did with the Evangelion series, to redo the series in a updated but condensed format, or at least I sure as hell hope that's what they were thinking. Wether it was or not, they failed.

Alteration I: Tao started off well enough, by addressing some of the shortcomings of the original series. Tao starts with some history of the main character Kazuma, who is an Alter user, someone who has a super natural power to create machines from their own willpower to help them fight. He lives in what is known as the Lost Ground, a part of Japan that has broken away from the main land by a supernatural catastrophe. It shows the history of how Kazuma met and came to live with Kanami and his long standing working relationship with his best friend Kimishima.

Because Alter users' abilities made it almost impossible to control them, a special unit was created, HOLY, which is made up of Alter users who have chosen to fight to maintain order and help the mainland's goals of rebuilding on the Lost Ground. HOLY's is constantly going on missions in the Lost Ground to stop native Alter users from using their powers to create chaos and disrupt the mainland's rebuilding efforts. And it is on one of these vary missions in which Kazuma meets Ryuho, a powerful HOLY Alter user who will become his nemisis.

It is from this point on that the Alteration movies seem to stick to the plot of the original series, but in trying to condense the 9.5 hrs of original content into the remaining 2 hrs of the movies means that a lot of material was cut. Which means a lot of the background info and dialog was stripped away and that makes the remaining story feel very choppy at times. Most of the reason I followed it as well as I did was because I had watched the original series (Something I'm not sure you had to do with the revamped Evangelion movies). Overall, I would more likely recommend a new viewer watch the original series and leave Tao & Quan to veterans who already know the complete story.