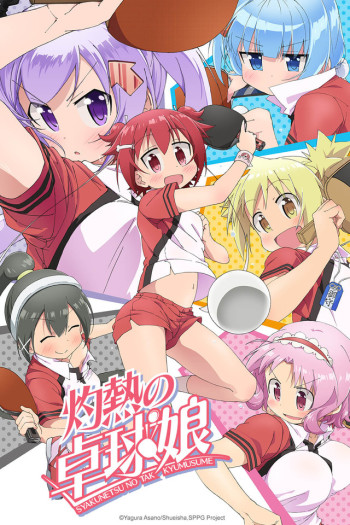 I have to admit, going into this anime, I wasn't expecting much. I like moe blob characters well enough, but moe blobs mixed with sports? It didn't exactly excite me. However, after watching the entire anime, I'd say it's worth at least a casual viewing of the first episode to anyone that likes sports anime. Now, for my rambling review!

Story: The story is basically, new girl transfers in and she is overpowered as hell when it comes to table tennis. However, the team as a whole are the underdogs of the region. Which is a typical sports anime set up. The story manages one play-off and training camp in its 12 episode run, setting itself up for sequels. However, with the manga only having 3 volumes right now, a sequel may be some time away.

Animation: It has all of the moe cliches, like red splotches on joints, cross-eyed emoji faces, and near constant blushing. However, as a sports anime, it had decent movment animation. There were some jerky movements, sure, but it still manages to show the game without relying too heavily on still frames. Do be on the lookout for starbust backgrounds, though, the animators really seemed to like those 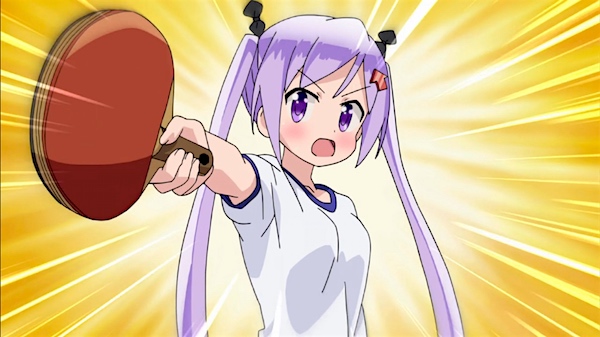 Sound: The opening is an upbeat pop cong that includes the words sets up the mood for the rather upbeat storyline. It's also song by the voice actresses, so kudos to them for being versatile. Sound effects wise, there's the shoe-squeaking on polished floor and ping pong ball hitting something. But really, that's all you need, right?

Characters: At the beginning of the first episode, we're introduced to a powerhouse team that loses the first match of the tournament. And then we never see them again. Because the anime then hard switches to a completely unrelated team. For the most part the anime is limited to the main 6 girls who make up the starting line up of Suzumegahara Middle School. The anime does spare backstroy time for the one rival group, but as for the main team, they are a sea of moe until the last 10 minutes or so of the last episode. However, the one thing that bugged me about the characters was that Koyori is never fully explained. How did she get so good at table tennis? Where did she come from?

Overall: Should you watch this? It won't be everyone's cup of tea, but it certainly isn't a bad anime. I'd say give it a shot.

This review brought to you by the Catch up with Fall 2016 Marathon.

Hi there.
We'll check out something a little different and preferably out of the comfort zone for a lot of you.

Don't watch if:
- In your opinion sports anime needs to be at least 2-5 episodes / match and 5 seasons long,
- you believe yourself to be an expert on all things moe (too generic for your refined tastes),
- you have a phobia of cute anime girls,
- you don't know the basic rules of table-tennis.

*IMPORTANT*
This show will likely end with 12 episodes. The four super-players (of which we've seen one) will likely not be shown. The dream of nationals will likely never happen, as so far we've seen a single practice game and that will be it for season one. That's considering there will ever be any more.
*IMPORTANT*

Story (6/10)
Story get a low score because of the things mentioned above. I will happily change that to a better one if this ever gets more of said story. I do not believe anything substantial can happen in the remaining two episodes, except a setup for a season 2. Taking into account both "sports" and "highschool club" genres the story is super-generic and easy to follow. As an added bonus the protagonist is the "I don't know my own strength" and "If I win, you will be a better person, too!" type of opponent. For experienced veterans this will scream cliche and generic for a mile, but then again you guys will watch that for the pretty girls. On a side-note, as a fan of sports anime that grab you by the feels, you might need tissues for things you did not expect with this one. If that doesn't scream "watch it" then I don't know what would.

Animation (7/10)
Girls are pretty. For some reason sweat is shown and even animated on the gym-clothes much more than we're used to, and NOT for fanservice reasons. This is something that screams extra-points at me (thought I couldn't care less about sweat itself) just for the effort. Also there was a lot to take points off for, so there you have it. Hair is not animated or drawn too great. Can't compare the animation quality to things like haykyuu because that one is on it's own level by far, and alone. It's much better animated than 90's shows were, but it retains some of that feeling using certain animation techniques, especially during games. You will not find animation lacking anywhere, but neither does it make you go "aaaaawwwww!" anywhere. Nothing more and nothing less for a show of this level.

Sound (7/10)
Some bold choices here. Electronic music accompanies the matches themselves, while everything else is generic, with tear-jerking sounds applied where needed. The music during games is enjoyable, albeit not to my taste. I did enjoy the OP and ED, but that gets no score. Sound, as far as table tennis goes, is pretty accurate. Ambience of rooms is not, but that does nto matter one bit and hardly anyone will notice. Voice actors have been picked perfectly to fit the many girls showing up, and will likely be a treat if you know a few words of japanese outside the subtitles.

Characters (8/10)
While fans and experts on cuties will certainly see this as generic, for everyone else it should be at least good. Girls are diverse, that includes animation and VA's as much as personalities. Some of the jokes are indeed in poor taste (as in the generic large-breasted girl's nickname being "mune mune"), but they are few and far in between. Girls get to evolve (mostly their friendship) and mature together, get to share some feelings (and yes, obviously there's a twin-tails tsundere) and generally be super cute. But they seem to be also dead-set on getting to nationals, and even if this never happens due to low popularity of the anime, it still makes for a fun watch.

Especially recommended to people not spoiled by the moe culture yet, but unless you really feel like you wouldn't like it, still worth the 12 episodes' time.

I was a bit nervous starting this anime, I'm not big on sports; sports anime however is hit or miss with me. The first episode started off weird and introduced one of the main characters who at first seemed like a snobby brat that was full of herself. She gets a lot better a few episodes in. Character development is great in this show its like every episode each girl improves themselves, and to top it off every main and secondary character have unique personalities and quirks that are both loveable and relatable. The story is pretty simple but it doesn't mean it's bad, it's just your typical sports team aiming for nationals. The animation quality is good, when they get serious in the matches is when it's at its best. The disclaimer for this show is that there is a lot of yuri subtext in it, I don't mind it, in fact some of the stuff they say is really funny. The shows strongest feature is how supportive the girls are with each other and how their friendship grows with each episode. I love yuri type anime and even though it's only subtext, if it wasn't in the anime I'd still be waiting for the next episode. They could tone down how sweaty the girls get but it's also good, I haven't seen any other anime that drew sweat like this and to me it's good to see humans are actually humans that sweat. As apposed the light sweat off of a chin in way more active/outdoor sports anime.

TO SUMMERIZE this anime is very cute and warm, I can't get enough of it, I love seeing the girls become better people, players, and friends. Every girl has a great personality, even the rivals at another school, who all could've had standard personalities feel unique, and you feel like you know them just as well as the main characters. If you can't stand yuri subtext then consider passing on this one it's full of it and shows no sings of stopping. The table tennis sequences are great and aren't drawn out so the pace is quick, I hate long drawn out sports anime (looking at you ace of diamond and yowamushi pedal grande road).