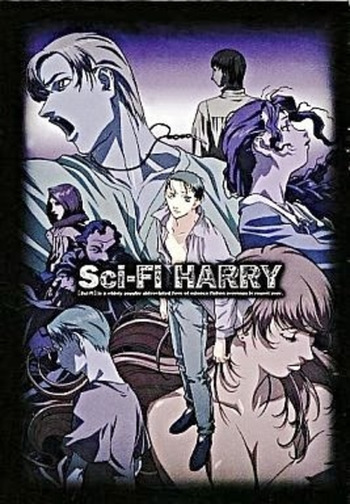 So I felt like checking out something different and this seemed like a good choice to me. Something kind of dark and fairly serious with some decent characters. Also an anime that didn't take place in Japan for once, was pretty refreshing.

Story- So the story centres around our main character an American highschool student named Harry. Harry gets bullied a lot in school, because hes quiet and weird/awkward. One day however he finds out he has psychic powers and the story progresses and escalates from there. If there is a dub in your own language I suggest you watch that, because this anime has ALOT of dialogue and although some things are not really that important, you may miss something significant to the plot if you are not paying attention. Like I mentioned the series is very dialogue heavy and it is also very slow paced. There are some episodes where barely anything happens and there are just a lot of conversations going on. Having the series only be 20 eps (fairly short IMO) helps though. I don't want to go into more depth about the story in fear of spoilers, but I would say its part mystery, part drama and part action. It can also be very confusing at times, but if you stick with it you may find yourself rewarded.

Animation- I really liked the character designs in this series. The faces are drawn realisticly with good amount of detail and actually look like westerners. The colors are quite dull/toned down for this series, which fits with the atmosphere and the animation is smooth throughout. Personally I really liked how the opening theme looked, I ended up not skipping it for any episodes; which is pretty rare for me.

Sound- The OST in the anime itself is not very memorable, but it fits the atmosphere of the anime. I really liked the opening theme and ended up never skipping it and the ending theme is also fairly catchy. The voice acting was good (from what I can tell of japanese VA) there were some voices that I felt didn't fit though like Myska.

Characters- This anime has a somewhat large cast of characters, but the main chars and thus most developed are Harry, Catherine, John and Chinori. All these chars are given some time for development througout the series and help to make it more enjoyable. Like I said theres a large cast so quite a few of them are forgettable. Another thing I liked was that were was really no "good" or "bad" in this anime, everyone just kind of has their own motivations is willing to do some pretty drastic things to see their aspirations realized.

Overall- This really isn't a series for everyone, due to the slow pacing, even I found myself quite bored at times. There are a few good action scenes though, but this is definitely, not something for kids considering there are some brutal death scenes as well as full frontal nudity. It would also probably be harder for younger people to get their heads around the plot. If you enjoyed some anime like Boogiepop Phantom, Witch Hunter Robin and Texhnolyze you might want to give this a try.