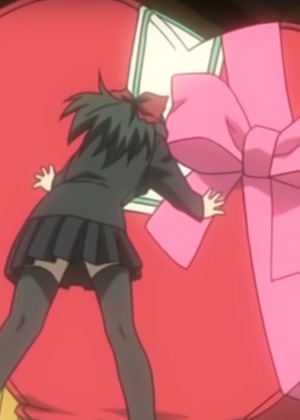 I didn't hold a lot of expectations coming in for the School Days OVAs, the Valentines special no different, and it's really more for people who want more of a silly, situational take on the series, almost like an extra episode, and to be honest, I did find it somewhat entertaining, but as for rememberance value...not really.

There's really no essential story to School Days OVA, hence why the score's so low,  save for the fact it takes the characters and places them in a parody presentation that's intended more for humor purposes than actual character development.  If you're looking for any of the seriousness the series presented or extra character development, you're not going to find it here.

The basic senario is this: it's Valentine's Day and Makoto finds his hands more than full with offers of chocolates from the girls...and it's not as sane as it looks. I found the scene where the girls were chasing Makoto with butcher knives humorous, it made me laugh because even considering how much I didn't like the TV series, at least it puts the humor as tongue in cheek and makes fun of itself, and I think fans of School Days might appreciate seeing this as long as they don't take too much of a critical eye to it. One could almost say it's an omake episode like the DVD extras you see for other series such at the Picture Book sides of Code Geass or Infinite Illusion on the Infinite Ryvius DVDs.

In short, if you watch this, don't expect anything added on to the original story, it's pretty much a filler episode.

The animation standards are kept generally the same as the TV series, so there's not much to comment here.  The only additional comment I could make is about the SD characterization used for humor: if you've ever seen the School Days side game when Kotonoha and Sekai are battling it out against each other with cleavers, it will remind you a lot of what to expect in the SD animation aspect.

I think the animation does a fair job of enhancing the humor, SD animations with some sides of humor can sometimes promote (such as Azumanga Daioh) or harm (Paradise Kiss), and if you're more of a situational comedy fan it works, but it just struck me as average.

I can't comment much on the music for this because the same opening and one of the ED sequences are used in this, so one could say it's of the same quality as the series.

The Japanese VA cast were kept the same for the series, and I think the reason why I found this series more entertaining than it otherwise would have been were that the cast members could overemphasize, effectively, in the shell of their characters, a humor that was duplicated even in the original series, but overshadowed to lend way to the story developed there.

No character growth or development to be found here, and like my previous review, I didn't have much like or connection with the characters.  Makoto seems to receive his just desserts (that was an intentional pun), but there were no markers or anything remotely about this OVA that made me think any better of the characters than I did before.

Overall, not so much a memorable watch unless you're just looking for a side story that separates itself, rather randomly, from the series and something more for romantic comedy.  It's more of a subjective watch, and all in all, I couldn't see it having a value of watching multiple times, it's short, situational, and, to be honest, below average.

Excluding the opening and ending tracks, School Days: Valentine Days boasts an astounding fourteen minutes of absolutely worthless content.  If my memory serves me right there was an actual Valentine's Day episode in the series, so why this was even made boggles me.  There's really not too terribly much to say about the (nonexistent) story other than it was downright awful, as it rehashes an extremely typical harem event and plops in an OVA for no reason.

For those who doubt me, the OVA begins with a completely random hot springs scene where all of the girls and Makoto are somehow all staying at the same resort.  The girls ogle each other's breasts for a minute or two before it immediately jumps to Valentine's Day (a total "wtf" transition, by the way.)  All the girls interested in Makoto from the story then proceed to all give him chocolate at the same time (surprise surprise!) and then chase him around in chibi format for a few minutes while he yells "no!" in a high pitched, annoying voice.  And then it ends.  It's seriously that bad.

There very first scene of the OVA looks nice, but the rest of it is downright plain.  It seemed pretty obvious that this was put together on a whim, especially given the minute long chibi-run-across-still-background scene slapped in the middle.  The animators didn't care about making this look good, and I guess they expected the viewer to feel the same.  But hey, you do get to look a bunch of poorly drawn cleavage at the beginning, so that must make up for it, right?!

Out of utter boredom, I completely ignored the musical score.  Other than that, same voice actors as the main series, though they have absolutely no difficult or dramatic lines to perform, so nothing worth mention.

As to be expected of such an OVA, the characters are "comedic" shells at best.  They bear no real correlation to the series, as any batch of harem females could have taken their place and still had the same effect.  I've spent more time trying to figure out what the hell to say about them than I spent watching the OVA, so I really think that says it all.  Shallow in the utmost degree.

This bears absolutely no relation to the series, and though it tries to be funny, it fails miserably.  If you enjoyed the series as I did, don't even bother watching it - not worth an iota of your time.

take away the drama and romance, this anime is just a piece of shit

Quite frankly, this is some of the greatest shit I've ever watched in my pitiful life. This is so amazing! It blows the original series and the other OVA and everything else that deals with School Days out of the water, shoots it up, blows it up, shanks it, beheads it and goes on a parade with the remains. It's that ingenius.

The story is pure gold. A guy running around with women chasing his bones? Genius! Cut and print! We'll make millions! They want to give him their chocolate and knowing who he is, they'll give him a lot more than that, believe you me. the story is brilliant in it's elegance of simplicity. It cuts right to the chase and if I remember, there's a onsen at the start. That right there is thinking. They thought this through and made it work! Holy crap it was brilliant!

But enough about the superb story. This looks as good as it can get. If it looked better, it would cause your eyes to explode for it looking so good. But it was toned down to just short of that so you, the lucky viewer, can enjoy this masterpiece. It makes Picasso look like a three-year old's drawing, that's how lucky you are chump!

It's music to my ears; music and voices and sound effects and anything that comes out of the speakers and into your ears. It sounds so good that I could just burn... rig... something, turn this shit into MP3's and take it with me. With the visuals. Both work in perfect harmony to make something holy.

OVA, right? No character development, right? WRONG. DEAD WRONG. This is all about characters. They work perfectly, act perfectly and are perfectly perfect in perfection. They are as perfect as can be.

In the end, watch this immediately! It rounds out to an 11 but the max I can give is a 10. If your mind melts, it's because you can't comprehend this... this... work of art beyond human comprehension! Hell, my mind nearly exploded and combusted all at once at the start due to me being unworthy but in the end, I saw the light and I walked into it without looking back.

See you on the other side of the pearly gates.

Im sorry, what was that? WHAT was that? I think you have some explaining to do, show.

Ugh, just...no.
I dont know why they even bothered, this wasnt, interesting, or heart warming, and I sure didnt find it funny. Heck, I would have even settled for Psychologically disturbing, cause you know, thats all the shows got going for it.

But no, all I was treated to was random one minute scenes  that went nowhere, and added nothing to its collective nothingness (I think it just divided by zero?)


Dont bother with it if you have any sanity...
Im just here for the badge...

PS. Kotonah, what the HELL