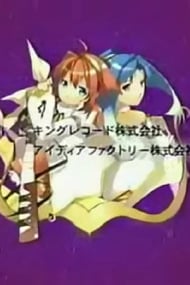 717 users are tracking this. Log in to see stats.

Story: There's this girl, and she goes to a new school of fighting. She gets into a fight with one of the most powerful gals in the school and kicks her ass despite having no talent. She then wins an eating contest of riceballs (?) and she and the one whose ass she kicked end up in a grotto. All that crap isn't spoiling anything and it's purely generic, grade A crap. The plot's existant for the first half but is tossed aside in the second with a horrid ending. With subs, the plot makes no sense. Without subs, it makes a bit more sense but still crap. It was so bad the translators couldn't even bother subbing this crap that the makers had no effort in making. And with no effort comes extreme boredom. It's tedious and not even a crappy musical number of clones can spice things up. Slideshow: Wow. This is easily one of the worst looking things I've ever watched. It ranks with those Yoji crap shorts, Human Zoo and it's sludge kin. Those screenshots are literal snippets of the show; it moves at a weak framerate most of the time, stills, more stills, crappy movement, horrid looks, choppy and it's overall a slideshow of crap. Even worse than the story, the visuals make it all the more boring. Of note is the horribly out-of-place buildings, all 768 copies of them. They look like shit. And the students? Six different bodies. Out of the dozens that appear. Onscreen. At the same time. Sound: Rival.... Rivallll..... It's bad, yes, kinda grating at times but the best part of it. The music, perhaps, definitely, and as such, I'm going to buff it's score. It may be crap, but it's the least crappy out of all the others. Rivaaaaal.... A musical to help the newbie learn, with Rivaaaal a large part of it. Characters: There's this guy named Faust, who gets smacked around with a green slipper. Grandpa is a leecherous pervert who looks up his granddaughter's skirt, gropes booty and is a chimney sweeper (?), the main is Mau? A- I can't keep this up. Except for Faust (Faust, I like saying that name) by name alone, they are crap, despite it being an OVA. Hell, you aren't watching this for characters. Overall: A dull, boring, generic, nonsensical crapfest. It took me three tries to get through the last half hour and even then it took twice as long. It's butt ugly and the makers could care less about their game tie-in. Unlike Popee, this isn't a guilty pleasure, this is just a raccoon mauling your nuts.