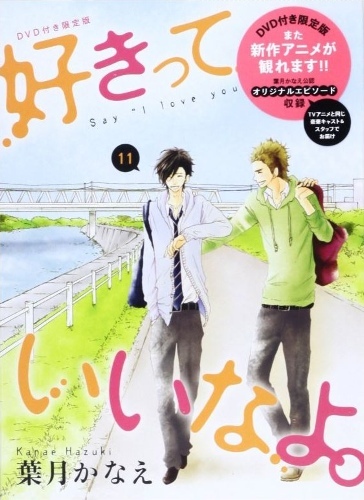 Generally these extra OVAs are tied to shows that lasted too long as it was, but with Say I Love You, I enjoyed having one more episode, especially one that didn’t just fly off into some randomness.

After being kicked out of Mei’s house, as he was making her nervous while she baked cookies with her friends, Yamato goes to a park to meet up with his childhood friend Kai. There they talk about some of Yamato’s anxieties, like how as a high school student he really didn’t know himself, always changing to fit in with those around him. The two reminisce for a short period and then part ways.

On his way home Kai runs into another student, Megumi, as she waits at a bus stop for her friend. He tries to engage her in conversation, but she wants nothing to do with him, instead yelling and chasing him away. We later learned he intentionally got off when he saw her, as he sees how Mei changed Yamato, so maybe finding someone would help him too.

Back at Mei’s house Yamato finally gets to try her cookies, and while not perfect, he says he enjoys them. Later the two go for a walk, where in Yamato hints to Mei that she’s the reason he’s happy and  see’s the world as a beautiful place.

As an episode that most likely cut out of the season, the animation matches exactly with the other thirteen in the series, staying with that amazing use of light and color, just as I would have expected them to.

With the same opening and closing themes, and equally as good background music, this episode fits right in with the others.

This OVA was only available in Japanese, and it didn’t disappoint, with the voices not only matching the characters, but also being very pleasant to listen to, perhaps being even better than the English version, which was superb.

For just one episode there was some very nice character building for Yamato, Kai and Megumi, and it’s actually surprising this episode wasn’t included in the series, since what we learn about Yamato is very important to knowing his character.

As a single episode, even if you didn’t know the series, this was very enjoyable. You can gather some of what’s gone on in the show, and it also adds something for both those who have watched it, or might be in the middle of the series.

I found this so much more entertaining, and properly done, than many of the recently acclaimed movies that tried to do the same, but then just attempt to skate by on the name of the director, while having a very weak story.

In the Say "I love you." OVA, Yamato delivers a very beautiful and thoughtful message!

After making the girls nervous and anxious about their baking skills, Yamato leaves Mei's house. He meets his friend Kai.  Kai found it strange  how Yamato visits the empty rundown playground. Yamato and Kei start talking about their anxieties and insecurities.  At school, Yamato was popular and always surrounded by people. He always seemed to have a fun time. So the empty playground was a calm and peaceful  place for Yamato to think, and gather his thoughts.

Yamato's words were really thoughtful, insightful,  and deep. Yamato says, "actually, sometimes I felt like a chameleon or something. Like something that changes its color to match its surroundings."

Yamato also says, "I was kind of anxious that maybe I had no personality of my own outside of adjusting to others."

These phrases really reminded me of conformity and how people try to fit in with others around them.  They tend to go with the flow. It's like they don't have a unique sense of style or taste. Those people are known as conformists. Their opposites are known as individualists.

It's relatable to see people try really hard to fit in especially in a crowd. People can be very social creatures that yearn to be popular. They buy the latest trends, and designer items. It's like a chameleon blending in to it's surroundings by changing it's reptillian skin color. However, by fitting in, they lose their own distinct uniqueness.

Overall, I gave the OVA a 6/10 rating. The message was really deep and relatable. But I find the Say "I love you." series to be a very slow-paced romance. The music was alright. You can hear a melodious piano music playing in the background. The animation was also pretty consistent. Sadly, it's far from being a heart-throbbing romance.