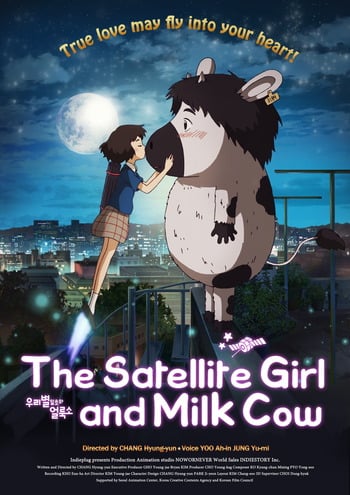 An out of commission satellite picks up a lovelorn ballad on her radio antenna and descends to Earth to find the source of such sincere emotions. But on the way she is caught in the crossfire of a raging magical battle and is transformed into Satellite Girl, complete with Astro Boy-like rocket shoes and weapon-firing limbs. Meanwhile, the balladeer in question – a loser 20 something at a café open mic – meets the fate that befalls all broken-hearted lovers: he is turned into a farm animal. But love knows no bounds, and aided by the wise and powerful Merlin – a wizard who has been turned into a roll of toilet paper – our duo must evade the all-consuming incinerator monster, the wily pig witch, and other nefarious adversaries in an attempt to be together.

This Korean movie is so out there that I really have nothing to compare it to, except to say is completely surrealist, it is just like a dream where you find yourself from one crazy situation to another one, without realizing the moment of transition, and you don't realize what you were doing until you wake up! It is not as crazy as movies like Trava or Hells Angels, but there is a lot of originality in the ideas for the characters and its wacky symbolism is quite unique, to say the least. Unfortunately, while I'd like to say that the originality alone does for a great watch, but the truth is that the movie fails to create an emotional connection and is at times unable to maintain the tone through their disjointed ideas, in short, it fails at the execution of the story a little. The story is about learning to appreciate the people who love us and let go of our stereotypes & prejudices to understand and accept our feelings. Even though there are lots of symbolism in the story, nothing is really deep or complicated, it's a kid's story after all, so it's done in simple terms. The characters and their wacky quirks are probably some of the best parts of the show, where the creativity really shows. There is a mix of mythologies from Merlin, The Witch of the North, Terminator, I mean Incinerator to a Mazinger Girl, Toilet Paper & Milk Cow; crazy, I know, but somehow they blend together in the story. The animation is both good and bad, on one side is a nice departure from the traditional Japanese style, including all of their cliches in both characters and interactions. It has a colorful palette and original character designs. On the other side, the foreground characters seem like it was cut and paste into the backgrounds, creating almost 2 different qualities for the animation.  Music plays a big role throughout the movie and both Korean & English songs are good, likable, soft, pop songs. I prefer the dub, but that is my opinion. The dub is great. The voice actors do a good job both for the voices of the characters and singing the songs in the dub. Overall, this is a good watch if you value originality and creativity over a cohesive story and emotional connection to what's happening to the characters. It is at the very least an interesting watch to see what else is out there besides Japanese animation and shows a future of open possibilities for the Korean animation industry.

Korea's animation industry is largely unremarkable, which is really a shame because the country has shown through its live-action productions that it is certainly not lacking in artistic talent. Satellite Girl and Milk Cow, however, shows promise for the future of the industry. Its charm and earnestness are reminiscent of similar Japanese animations, while still maintaining its originality. Although it may be rough around the edges, and you can't expect much in terms of animation, it's still enjoyable and is hopefully a sign of more good things to come.