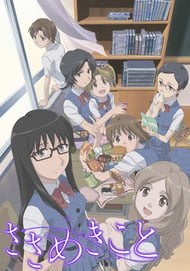 There might be grammar errors or missing words in my review since I'm typing on my tablet Story: Sumika Marasame, a tall, athletic girl has been secretly in love with her best friend Ushio Kazama since middle school. They became friends in middle school because she was alone and had no friends. Ushio's former friends don't want to be around her because she's a lesbian. Sumika, who was a class president decided to  hang out with her. Thus, becoming friends. Sumika at first wasn't really in love with Ushio until their skiing trip where Sumika started falling for her secretly. The problem why Sumika can't confess her feelings to Ushio is Ushio only likes "cute" and "small" girls while Sumika is tall and athletic. Another problem is if Sumika confessed her feelings, their best friend status might be over. Later in the story, Ushio and Sumika met Tomoe and Miyako, the 2 girls they spotted kissing when they went back to the classroom. Turns out they're a lesbian couple. Tomoe wants to form a girl club where girls can only join. Sumika and Ushio later joined Im not going to get deep in the story so I'd skip some parts After Sumika and her friends enter their second year of high school, two first-year girls named Mayu Semimaru and Koino Matsubara join the female karate club. Sumika is troubled over her relationship with Ushio, which has an adverse effect on her karate performance, much to the disappointment of Mayu. Sumika starts to get more involved with karate training to take her mind off of Ushio and in doing so, inadvertently distances herself from her. Ushio breaks down in depression because of this distancing, which results in Ushio breaking her arm, but is able to make up with Sumika. Tomoe accidentally implies to Ushio that Sumika has romantic feelings for her, much to Ushio's surprise, and Ushio finally accepts that she has fallen in love with Sumika but decides to become less dependent on her friend before confessing because she believes love will always fail for her.  Im not continuing the story anymore, I'm tired. Animation: In my opinion, the animation is the best one I've seen compared to other anime's I've seen. This looks more like a mix of Western Animation mixed with Anime which I love. Sound: Sound got a low rating for me because they keep re-using it. It seemed like they were too lazy to make a new soundtrack for each episode. The opening theme and ending theme was ok. Not bad but not great either. Characters: People might disagree with me on this but the characters are good and excecuted perfectly. Most of the characters are funny (especially Miyako). Some of the characters that are not introduced in anime was introduced in the manga version. Those characters are Lotte, a German student. Mayu and Koi, best friends since kindergarten. Lotte is one of the funniest character's I have seen especially when paired up with Miyako.  Overalls: As you may have noticed, some of the stories I mentioned and characters I mentioned are not in anime. That's because the anime version covered 12 out of 53 chapters of manga. I'm guessing the anime version was for those people who hates reading because it's exactly the same as manga(except episode 12). If you have patience in romance and patience in character development then this is a show for you. If you want something quick then this is not a show for you.  You might also get dissapointed with the ending of anime series because the ending they showed was the ending of manga volume 1. If they were to continue the series and make season 2 (which won't happen) then they would cover the manga series volume 2.  In my opinion, the show is one of the best anime series I've seen. What I really love is no explicit scenes, kind of realistic lesbian relationship, takes time for things to develop, no breast kissing (looking at you Aoi Hana), and not a lot of kissing (looking at you Sakura Trick). If you're going to read the manga version then I recommend watching this series so you don't have to read the first 12 chapters of the manga. If you're looking for cuteness then this is also the show for you.

I’d like to be able call Sasameki Koto a romance anime, but I can’t. You see, in romance anime you’ll first have (optional) episodes full of lingering emotions, desire for a certain person and then (mandatory) romance. That’s right, when I start watching a romance show, be it straight, yaoi or in this case yuri, I want to have some sort of development, be it in a tearful rejection or blissful union. While I enjoyed the majority of the show, filled with cuteness, innocent uncertainties and comedy, it was all in anticipation of something that didn’t happen. With all that out of the way, Sasameki Koto is by no means a bad show if you get in with the right attitude (unlike me). It’s a fun-filled slice of life show with yuri tones everywhere and a calm pace. Especially the first half was well worth it, full of great characters, decent development and fairly succesful comedy. For fans of slice of life comedies and yuri, this one is worth checking out. Don’t be expecting top-notch relation-development though.Yes, I realise the chance a second season will adress the unfinished business is large, but to be honest, I don't think I'll watch it. If I pick out a series for romance, that's what I'm looking for, no agonizingly slow character development. 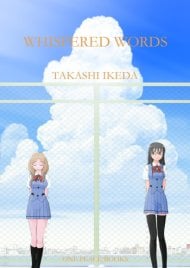