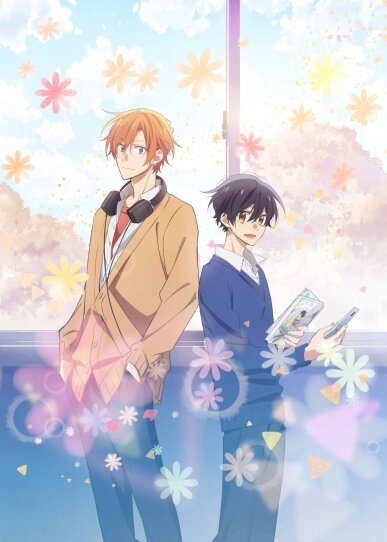 This is probably the second yaoi anime I had watched after Gravitation (though this one thankfully does not have any problematic moments like that one scene in Gravitation that repulsed me). This series is truly cute.

In the series, we have Miyano, a young teen with a feminine face who attends an all-boys school. Miyano loves reading manga, BL manga to be exact. One day, Miyano sees a fight between some students to which Sasaki intervenes and gets somewhat ruffled up in the fight. Around that time, Miyano introduces his upperclassman to BL. So, it begins with Miyano loaning Sasaki manga, and they would then talk about the different motifs of the genre. Through it all, the two become more aware of the increasing feelings they have for each other.

It is a simple story that I can see being done several times. What makes it good, however, is seeing these two boys pondering their feelings for each other and you could tell that they are confused about what they should do about those feelings. But at the same time, it felt right. I appreciate that the show does not rush to them suddenly falling for each other. Instead, it takes a slow-burn approach planting the seeds for their relationship until it started to bud.

The animation itself is also pretty simple, but it befits the soft, gentle atmosphere of the series.

The main couple is just adorable. Miyano starts off being hush-hush about his interest in BL manga, but when he gets Sasaki invested in it, he becomes very passionate about what he loved about the genre. It doesn't take painstakingly long for Miyano to recognize Sasaki's feelings for him, but he is conflicted about them because he held onto the idea that he liked girls due to a minor relationship with a girl he knew years ago (though someone should really tell Miyano about bisexuality). Joking aside, Miyano is a good protagonist.

Sasaki, the supporting protagonist, is the "delinquent" who takes a liking to BL when Miyano introduces him to it. I just love nearly everything about Sasaki. He treats Miyano with such tenderness, it is too cute. Unlike with Miyano, it doesn't take Sasaki too long to realize his feelings for his kouhai, but he's the type of guy who would allow the significant other to think about it instead of pushing for it which would make the other uncomfortable. It was also sweet to see him have moments of being defensive of Miyano.

The supporting characters are good. There's Taiga who also looks out for Miyano; Jirou, a "bad boy" who doesn't understand BL manga since his girlfriend was deep into that genre (even though she doesn't expect you to take part in her likes my dude) and is never without a sucker in his mouth.

Sound: The opening and ending themes are very good.

Sasaki and Miyano is an excellent for anyone into romance anime and does a great job at avoiding quite a few BL cliches, especially the noncon trope (heavily side-eyeing the poor taste 'joke' in another review). In terms of adaptation of the manga, it does such a great job at bringing to life the little details of the manga, like added ethereal-looking or comic-y looking shapes, starts, hearts, etc. in the more dreamy or romancy scenes.

Story: it moves really slow, but it really does justice to the manga and is well-paced in terms of the pacing of the source material. The story covered about half of what's been released of the story thus far. Content-wise, the story is sweet and relatively wholesome with quite a bit of comedy and satire, especially when it goes a little meta as it's a BL with a main character who's a fudanshi, and the MC's core shared interest is BL.

Sound: sound is great, both the opening and ending are nice and work well with the content of the anime. Voice acting is really well done (I listened to a dub for one scene just to see what it was like, and... haha)

Characters: the characters are what roped me in. Great variation in characters and each one has a role in advancing the main storyline. Of course, Hirano may (fingers crossed) get an anime adaptation of Hirano to Kagiura which would be excellent, and we do see a glipse of Kagiura in one episode. The one thing I'll say is you'll often want to scream at Miyano (for obvious reasons as the story progresses).

Anyway, give it a shot! I really enjoyed it, but the pacing was frustrating. Now that it's bingeable that wouldn't be as much of an issue!

Usually I'm really not into how rapey BL and yaoi tend to get, but this series is advancing so incredibly slow that while watching it my partner and I joke about how at this point noncon is welcome to FINALLY get the plot moving.

This series is so boring to watch. Cute and sweet, but boring.

Sasaki is a sweetheart 10/10, Miyano is an total idiot and gets old pretty fast 0/10. Like, how long does it take for a fudanshi to realize he's not straight? Forever, apparently.

Edit: I'm serious, I didn't like the series. Me not liking your fav series is not as big of a deal as you might make of it. This opinion is as valid as any. Salty comments will be deleted.

If you are BL fane i suggest waching this cute anime. It is very cute.

I love to see another season of this  since it was too adorable.

I think it is a very refreshing bl anime since the romance between the male leads was very detailed. It does have a slow development of the story but I get why it does since the author is trying to show how the mc was confused about his sexual orientation which is very ironic since he reads bl manga. The mc really did think about his feelings a lot. The seme was very patient and totally a green flag, I like how he did not hesitate to tell him when he was very sure about his feelings. It's not very realistic since people around them just accepted the fact that they like each other or assumed that they were together, in reality, people would question them. If you're looking for a change of pace in reading bl story then I recommend this.