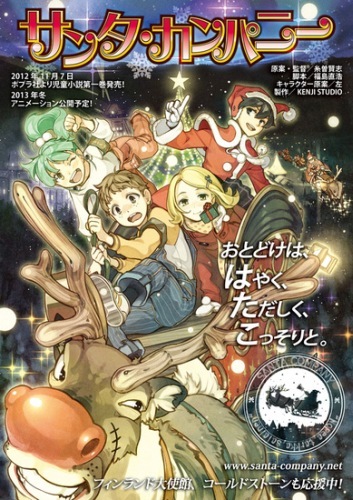 Noel Christonbel is Santa Claus no. 29. He and his reindeer, Rudolf (in human form) visit children on Christmas day and give them presents - whatever they ask for. However, what happens when one of the children they meet doesn't want anything... and instead feels he should die?

In a certain time, in a certain land, there was a beautiful magician with long, trailing silver hair. His name was Liu Li Xian, a man whose beauty was so great and his magic so powerful, others believed him to be not of this world.However! He had a certain "illness." Which was that he really, really, REALLY liked pretty men. He found them IRRESISTIBLE! Liu Li Xian's grand adventure in seeking out prospective lovers begins!

Figaro, the second son of a famed aristocratic family, was chased out of the family for being unable to use magic. Left with nowhere to go, he was picked up by an old man who lived on the outskirts of the town. Unbelievably, the old man was a Grand Wizard who saved the world in the past! In this new environment, Figaro awakened to a new power, his body strengthened from absorbing magic essence and being able to use powerful magic using magic tools. But one day, he saved a girl being attacked by bandits and ended getting involved in a national conspiracy—!

Sekai no Owari no Mahoutsukai

1000 years ago, a war between humans and space witches ravaged the stars, destroying countless planets and taking even more lives. Eventually, the humans captured the most powerful witch and imprisoned her as a war criminal under the treaty. The castle where the Magic Lord is sealed away is watched over by a village where everyone has developed weak magical powers—everyone but Mugi, that is. Determined to prove that he doesn't need magic, Mugi accidentally flies into the monster-infested forest surrounding the castle and is saved by a girl that he has never seen before...

Some of our most cherished manga characters are blessed with magical powers. Others have an extraordinary combination of superhuman strength and cunning intellect. But Hibiki? Her only real skill seems to be making a pot of delicious tea...or is it? This heartwarming fantasy story will have you believing in Hibiki's magic!