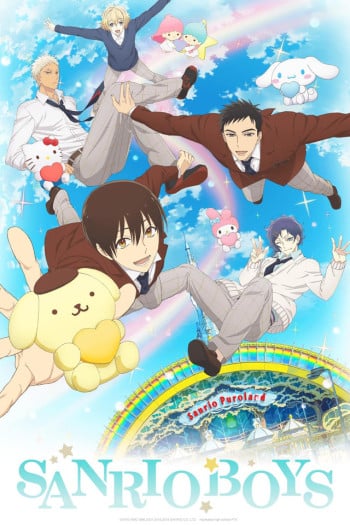 These are both shows about high school boys doing their best at what they like to do, or in some cases in what they have to do. They both have adorable characters and a similar art style.

These are both cute shows with adorable characters. Tamako Market is all girls and not all guys like Sanrio Boys but the art styles are both cute and they both share similar themes of self discovery and figuring out where you fit in the world.

Our story takes place in Japanese Style Tea House "Rokuhoudou" which is quite popular due to the great efforts of Sui (shop manager in charge of tea), Gre (in charge of Latte Art), Tsubaki (in charge of desserts) and Tokitaka (in charge of the food). Not only do the excel in hospitality for their customers, but they also help out with their worries from time to time. A series of endearing stories that take place in this heartful restaurant. Who will be their customers today?

Both of these shows have a similar art style and they are both about a group of guys who hang out together all the time. They both have characters who experience a lot of growth and overcoming dificulties they had with themselves and those around them.

A Vocaloid x voice ACTORS collaboration, featuring songs from EXIT TUNES. Within a sprawling academic metropolis lies an exclusive academy where students are encouraged to join clubs such as singing and archaeology to earn points for recognition. The most important of these is the big singing contest where all contestants have to sing in front of the entire school!

Both of these animes surround male characters in a school environment. They're both cute slice of life anime with a bit of drama added in. They both have very similar wholesome energies to them and follow their development through issues in/out of school.

"Fairilu" are fairies of flowers, insects, mermaids, or other entities that are born from "Farilu Seeds." All Fairilu are born with their own key, and they must search to find and open the door that fits only their key. Once the Fairilu pass through the doors, they mature. The doors are also related to the human world.

The Anthem of the Heart

Jun is a girl whose words have been sealed away. She was once a happy girl, but because of a [certain thing] she said when she was very young, her family was torn apart. One day, the egg fairy appeared in front of her and sealed away her ability to talk in order to stop her from hurting anybody else. Since this traumatic experience, Jun lives in the shadows away from the limelight. But, one day she is nominated to become an executive member of the "community outreach council." On top of that, Jun is also appointed to play the main lead in their musical...