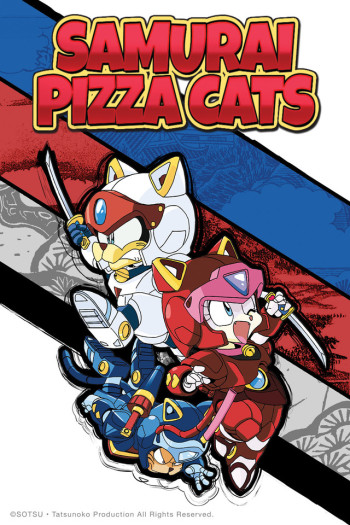 In the village of Little Tokyo, Speedy Serviche, Poly Esther and Guido Anchovy run a pizza delivery service; but little do the townsfolk know that when danger lurks, the Samurai Pizza Cats spring into action to take down evildoers where they stand! Seymour “Big” Cheese and his right hand birds Jerry Atric and Bad Bird are on a mission to take over Little Tokyo, and it’s up to the Samurai Pizza Cats to stop them. Pizza, robots, and lots of missiles abound in the fight against ongoing evil! Do the feline crusaders have what it takes to protect their town and sling delicious pies?

Stop Dragon My Cat Around!

The Town Is Full of Sushi! Panic!

Dig a Deep Hole and Dig Some More!

Have Problems? Buy the Cards of Happiness!

An Idol is Born? A Honeyed Trap in Show Business

Exploration! A Playground for a Precocious Princess!

Well, this is one of those really, really rare cases, where the English dub is good... Probably because they never bothered with the original script and made up their entirely own. And this is one of those really, really, messed up series that never gets old, no matter how much repetitive it gets. Plain enjoyment! ART SECTION: 7/10 [Cyborg samurai cats???] Originality is rare and this series has a really original way of depicting its world. Imagine a world, where everyone is animal in appearance. You have seen it before, right? But imagine if they are all wearing costumes that make them look like humans DISGUISED as animals. No point in doing that if they are cartoons, right? Add that they dress like robots, mechanical samurais, ninjas or American superheroes. Getting more original? Maybe that the world is a colorful place, filled with weird contraptions, bizarre nations and coo coo leaders? Well, I don’t know about you, but I HAVEN’T seen another series with so many stereotypes, mixed up in the same time. It’s plain wonderful! The aforementioned cyborg-animal-samurai-costume-something characters have a very European look to them. Apart from those sweat drops and other familiar characteristic reactions, they are not that different from an old Warner Bros cartoon. Which is a great thing, as those cartoons are funny no matter how many years pass. So, as far as appearances go, they will feel very kin to non-Japanese people as well. Their vivid expressions, cartoonish deformity and weapon gimmicks make them great to watch.Backgrounds are detailed but not in extreme ways. And know what? You won’t care about them after a while. The characters are the whole focus. Animation is choppy and jerky. Repeated footage and still images are everywhere. But who cares? Flapping their feet like crazy while popping their eyes 10 times the normal size is funny on its own. Visual Effects are poor but they are present. Nothing great but help in the presentation. SOUND SECTION: 8/10 [The Pizza Cats are Samurai and I’d like to note, their antics take your breath away, like fur balls in your throat.] I must say that I have watched only the English dub and for once, I didn’t regreat it. It is simply awesome! The voice actors did a great job into sounding funny, like, 95% of the time. That IS something. I have never encountered such a great amount of puns, in-jokes, cultural parodies and tongue twisters in a silly comedy before. Most are very good and you will probably press the pause button several times in order to laugh without missing the next joke. Still, you must be well aware of several cultural references and terms in order to get most of the jokes. And you must pay attention to what they are saying because they tend to chew some words. So, ok they talk REALLY fast and usually you miss half of what they mean but that is not really a minus. It’s an exuse for rewatching the episode! I wonder how good the Japanese dub will be…Amongst the longest intros and endings I have ever encountered, the intro and ending songs are plain hilarious. The rest of the music themes are ok but repeat way too often and get boring after a while. Sound Effects are the usual cartoon-treatment of BOINGS and CRASHS and ZDUPS we have heard in European cartoons over the decades are here. Nothing great but do the job. STORY SECTION: 3/10 [I know how it plays out but I don’t mind it!] The story is completely clichéd. An insane, megalomaniac rodent counselor named Big Cheese (hahaha! What a name!) plans to dethrone the useless emperor and become the absolute ruler of Little Tokyo. But the chief of police has hired a trio super samurai cats (???) that work in a pizzeria (?????) to stop his army of crow ninjas, mechanical monstrosities and several other plans. Well, that’s pretty much it. It is nothing much but trust me, it is funny! Although completely repetitive, the plot hardly gets boring. Because each time the jokes are different and the method of the villains differs. Big Cheese schemes something, the city is under attack, the feline heroes blast-off to defend it, do stupid things, then the hero pulls out his ultimate weapon, wins the battle and the villain literally explodes in a burst of anger. Some episodes provide a simple twist to main idea but the pace is always the same. There is a conclusion but it’s nothing unexpected or that conclusive. CHARACTER SECTION: 5/10 [The heroes who always wear fur.] The characters become likable in a few minutes thanks to their cute looks and funny grimaces. Apart from some stereotypical quirks for every character, there aren’t really any prevailing characters or original personalities. They are colorized with further quirks, weapons, and really subtle romantic developments but it is nothing great in all. VALUE SECTION: 6/10 [This pizza is worth its money.] It’s not famous but at least with so many puns per episode, and because of the fast way the characters talk, you will definitely feel like rewatching the series to get the rest of the jokes… and laugh again with the old ones. ENJOYMENT SECTION: 7/10 Besides some really lame jokes and repeating footages, the series is one, big laughter. VERDICT: 6/10 I don’t know if cats always land on their feet but I had a hard time standing straight with all these jokes. SUGGESTION LIST Damn, this was hard. There isn’t any other comedy, quite like it. Oh, well, besides the equally good Warner Bros cartoons , there are always Urusei Yatsura and Ranma ½ as all time classics. 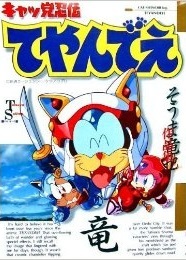