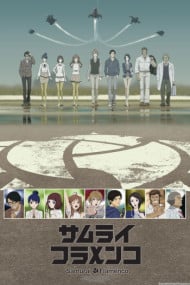 Hazama Masayoshi is a successful model who's been enamored with righteous masked heroes since he was a child - so much that as an adult, he’s decided to become Samurai Flamenco: the masked hero of justice! But much to his dismay, the job isn’t as easy as it seems and during his first night as Samurai Flamenco, the man is knocked out and saved by police officer Hidenori Goto. Swearing to keep his secret, Hidenori quickly becomes Hazama’s friend and partner on the job, but soon the pair find themselves in a sticky situation. Not only is the media determined to discover Samurai Flamenco’s true identity, his actions also trigger copycats, flooding the city with other masked heroes!

How many plot twists can one anime have?  -_-' There are so many things I can say about this ... so very many things... Samurai Flamenco starts off as a simply awesome anime. The first arc was incredibly entertaining and leaves you with the feeling that this is going to be a fantastic anime ... and then you hit its first plot twist ... I sat there dumbfounded. I-I didn't know what the freck had just happened! Then the second one happened and I just gaped at my computer unable to comprehend wtf was going on! By the third ... well, let's just say I wasn't surprised anymore... -_-"  You simply cannot take this show seriously! If you do, you're in for major disappointment! Despite the craziness I was still somehow able to make it through the entire anime, and I still found it absurdly entertaining. Samurai Flamenco is kind of like a train wreck. I simply couldn't look away... The animation wasn't bad, nor was the soundtrack ... the characters, on the other hand, were one big giant bag of crazy! Hell, the only one you think is sane turns out to be one of the craziest! (sad, but unfortunately true). And the plot ... sweet baby jesus, the plot! It was like they crammed every corny superhero cliche into 22 episodes and then went "Awwwesommme!" ... no, just NO! *shakes head sadly* I suspected for the longest time the staff and crew were either extraordinarily high while they were making this anime ... or extremely drunk! And honestly that may very well be their secret. I still cannot even begin to fathom who thought this up! It makes my brain hurt too much, so I'm not even going to try! I will say though that I actually enjoyed the last antagonist. The wrap up though made me yell at the screen... I still don't get why Masayoshi- ehheem- you know what? Watch it. You'll understand why that wrap up made me facepalm and then made me want to bash my head violently against the wall ... -_-' Overall, an absurdly ridiculous anime that you can't take seriously. It has so many plot twists that you'll lose track... It will mess with your head if you even try to take it seriously. If you give it a go ... I say good luck! I hope you come out of it with your sanity still intact ... (I question my own -_-").

Sigh. Samurai Flemenco is an anime that I was warned to not watch because it is not what people expect. To be fair and honest, I have only watched until episode 11. At this point I am not sure if I will continue.  The show starts off realistically with fairly good back stories and progression. The plot points had comedic value that actually made me laugh out loud and yearn to watch more. After a certain episode, I was left wondering, "what the actual fuck?" It is at this point that the show changes genres completely and starts being more and more of a parody. The problem with this, the really big problem, is that the story loses value the more ridiculous it gets. The twists are somewhat good, but get more and more stupid the further into the show you go. I want to say that for the first 6 episodes I rate this show 9/10. The only flaw I saw, was that the sidekick girl turned out to be a flat character, which was disappointing.  But after episode 6 and especially after episode 10, the show has become borderline horrendous. It would be wrong for me to rate this show poorly, due to how fantastic the beginning is.  TL/DR___ This show is alot like Gurren Lagann. It starts off pretty great, but loses the value and point of the show the further it goes. If you like comedy without story, this show is perfect and will keep you wondering whats going on. But if you like deep story with compelling characters... eh..  Final Verdict: Watch Samurai Flamenco as long as you enjoy it. Don't be afraid to drop it half way through. 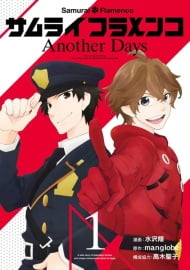