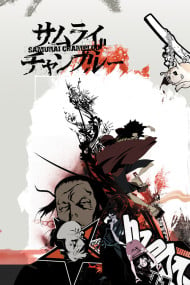 Samurai Champloo is all about style, from the dj-style scratching scene changes to the hip-hop-inspired soundtrack to the eclectic character design. Mugen's fighting style is a funky meld of capoeira and limb-cutting, and Jin is the dramatic foil; he is all steel and old-school samurai style. What binds them together is the desire to test each other's abilities, and a promise to a girl named Fuu: to find the samurai that smells of sunflowers, who plays a pivotal role in her past. Together they travel through edo-era Japan, finding battle and comedy wherever they stop.

StoryOf all the general themes in anime, one of the most thoroughly overdone ones is the “with friends, we shall prevail” motif. In these, the protagonist can only overcome some seemingly insurmountable task with the help of his or her group of friends. Even those who haven’t seen much anime can probably name at least one series that does this; they’re literally everywhere. One trait that sets Shinichiro Watanabe’s work apart is his refusal to accept this Japanese conformity. In his anime, all of the characters define themselves by their individuality, fighting for themselves and ONLY themselves in a vast and lonely world. In Cowboy Bebop, the characters were thrown together by chance and stayed together only as long as convenience allowed. Although the anime was for the most part an action comedy, even the hilarious moments were subdued by this profoundly forlorn undercurrent of internal solitude. Samurai Champloo has a very similar feel; in the series, three misfits who would otherwise have nothing to do with each other are thrown together by coincidental events. The characters then proceed to engage in a variety of episodic escapades, finally culminating in a suitably climactic and suspenseful conclusion. This basic plot structure, combined with Watanabe’s trademark freeform style, makes it easy to draw comparisons between the two works, despite the radically different settings. However, something that most people have not mentioned is that the anime are also subtly different. In the end of Cowboy Bebop, the characters all drew even more inward than they were in the beginning, as the ephemeral nature of life swept them into their own personal dreams. As their desire for money became more and more faint, so did their need to interact with the rest of the crew. In Samurai Champloo, however, the characters are clearly not together for mere convenience; on the contrary, they almost constantly complain about the troubles incurred by staying together. Rather, they travel together for almost no reason at all, and find themselves continuing to do so despite each of them repeatedly threatening to leave. At the end, the reason for continuing to travel together becomes apparent; no matter how individualistic a person is, each and every one can reach out and actually recognize someone as a fellow human being. Each character eventually does exactly this, respecting each other as fellow humans and perhaps even friends. I first thought that this contradicted the general message in Watanabe’s previous work, but after some thought I’ve decided that Samurai Champloo philosophically builds on the groundwork laid by its predecessor. The characters in SC, even as they gradually begin to trust one another, remain fiercely independent to the bitter end. However, by being forced to interact and actually understand their fellow comrades, they are able to gain a deeper wisdom together than they would ever obtain alone. Where the characters of CB were all trapped in their personal realities, the three travelers of SC are able to look beyond their own lives. Unfortunately, while SC is more mature than CB in this respect, in many other ways it can be considered a step down from Watanabe’s (admittedly amazing) previous work. The entire series is, for one thing, a lot less tightly wound than CB in terms of storyline. SC uses an ample amount of recap, which is absurd when you consider that each episode is practically self-contained. More importantly, some of the episodes drag a bit, and the wry, sardonic humor that I loved in Bebop has been replaced with slapstick and overblown melodrama.AnimationEven the most hard-nosed critic has to admit that this show has great fight scenes and character designs. The overall look of the series is perhaps even more stylized than CB, and as a whole works awesomely with the story.SoundSadly, the soundtrack is vastly inferior to Bebop’s. Like Bebop, Watanabe tries to get the OST to match the soul of the series in a unique and noticeable way, but the overall quality of the work isn’t nearly good enough to pull this off. In particular, the OP is one of the worst that I’ve ever heard, a pathetic attempt to be cool that borders on laughable. The rest of the OST fares better, but is still repetitive and occasionally annoying. My problem is not with the genre of the music (the jazz in CB was every bit as anachronistic as the hip-hop here, and no one complained about that), but with the execution as a whole. Black Eyed Peas this ain’t.CharactersThe characters are all drawn in a few broad strokes, and as a result feel somewhat canned and unoriginal. However, theyre still remarkably likeable, and near the end gain more depth than they had in the beginning.OverallEven if this series is to be considered a step down, a short hop down from such lofty heights isn’t nearly enough to sink the show. Samurai Champloo is a consistently entertaining, awesomely animated and often poignant series, and a worthy follow-up to Watanabe’s original work. 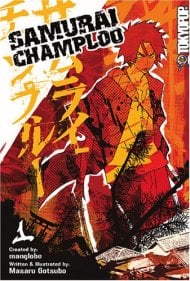