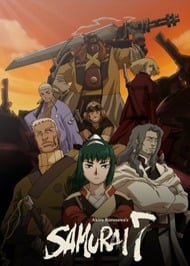 StorySamurai 7 is a great anime adaptation of Akira Kurosawa's classic 1954 film "Seven Samurai". In Gonzo's adaptation the original story of class-based struggle is transplanted into a futuristic world that conveniently resembles feudal Japan. Though in this pseudo-futuristic anime world samurai's can slice through giant mecca, chop bullets in half, and deflect laser blasts with Jedi-esq reflexes. All of which, makes for epic battle sequences where bows and swords square off against laser cannons and mechanized samurai.Settings aside, however, the story is remarkably true to the Akira Kurosawa masterpiece. With both stories starting when a poor farming village gets tired of being persecuted by a band of dishonored samurai who roam around the countryside extorting rice from farmers. Then in an attempt to free themselves from this vicious cycle of extortion the villagers decided to fight back and send three villagers to the city to hire samurai willing to be their guardians in exchange for meager offerings of rice. Granted like all good stories, Samurai 7 isn't that simple as the villagers find that most samurai are insulted by the offer and quickly refuse. Eventually, however, the villagers manage to recruit seven samurai all of whom enlist for reasons beyond the trivial offerings. All of this sets the stage with ample back story, foreshadowed character development, and a story of class-based struggles that comes together to form an excellent story that's absolutely worth watching.Also, for true fans of Akira Kurosawa's "Seven Samurai" I should mention that this story does extend Kurosawa's original tale with a bit of poetic licenses. So I would encourage those fans to actually watch this piece as well because while Samurai 7 is based on Kurosawa's work it is actually a well managed update that does a good job of extending the original story without corrupting the original core points and themes. AnimationLike most Gonzo pieces Samurai 7 gets extremely high marks for production quality. The characters are well drawn and blend nicely into both CGI and hand drawn backgrounds. In addition, there are scenes that are absolutely breath taking and the battle sequences are both well drawn and visually compelling. All in all, very high marks for Gonzo here as the work was very well done.SoundWhat really distinguishes Samurai 7's score is the way that Gonzo blends traditional Japanese instruments, modern music, and sound effects together to create a dynamic score that's a symbolic audio bridge between Kurosawa's 1954 classic and this modern adaptation. Probably the best example of this is the closing theme which has a very JPOP sound yet still leverages the traditional Japanese Taiko drums in the background. That said, throughout the series the Koto (a traditional string instrument) and Taiko drums can be heard in perfect harmony with a modern orchestra. All in all, a very complex, but complimentary ensemble that the viewer should really pay attention to as it does a great job of incorporating very traditional Japanese musical elements into a very modern score. CharactersGiven the fact that the story was based on a classic that all film buffs have likely seen this was an area where it would have been easy to mess up. However, I have to admit despite the futuristic pseudo-Japan setting the characters, I felt, were actually better explained in this story. As Gonzo dedicated significant amounts of time to telling the back stories of each of the samurai and fully unveiling their individual motives for joining the mission which, in my opinion, was something Kurosawa's original three-hour epic was a little weak on. That said, the characters are still very true to Kurosawa's original molds and fit well into this futuristic world. All in all, the characters and their underlying back story were nicely unfolded in this modern adaptation.OverallHonestly, this has been one of the most enjoyable pieces that I've watched this year and I really rank it behind only Elfen Lied and put it on par with Basilisk. In addition, I should note that I'm often critical of these pseudo-futuristic world settings as that's often a license for storytellers to re-invent the laws of physics in order to bend it to the whims of a loophole filled plot. Thankfully, that wasn't the case here. In fact, I found myself drawn into the story and readily accepting this world and the new powers the samurai were granted because of the way everything was setup. Regardless though I have to say that Samurai 7 is a real must see for anime fans and anyone who enjoyed Akira Kurosawa's original masterpiece.Also for those interested in owning the series I really have to say the box set that FUNimation put together after all the DVD's were released is really something worth owning. It comes with seven DVDs and a fold out case that comes packaged with a beautiful box and seven small guidebooks. In truth this was one of the best packaging jobs I've seen for an anime series and would almost recommend it on aesthetic value alone.

THE STAFF - Animated by studio GONZO, which means crap on a CGI stick. These guys are terrible.- Directed by Takizawa Toshifumi, who is a a bit famous for his work on the original Votoms, but has otherwise produced nothing of interest.- Based on the homonymous film y Akira Korosawa, and thank goodness he is not around anymore to see what they did with his work. SCRIPT The first arc is the same as in the movie. Peasants asking for help from non-greedy samurais to protect their village from being looted by bandits. The themes are how honor is a lot more important than money (sparkling rice in the show) and how the peasants are spineless wimps who have to stop asking others to help them and aid in the solution of their problem. Differences include:- The world is not the feudal Japan but a semi-industrialized, futuristic land. This makes the story a lot catchier as all those flashy machines are a lot more interesting to watching only trees and meadows. Plus, it makes the gap between rich and poor a lot bigger.-Instead of human bandits, there are huge mecha. This is not a complete difference, as the original story featured a gun, which was a lot more deadly than the samurais’ swords.-The end of the first story gives space for more story, and the conclusion of the movie is taken to the end of the third arc. The second arc is about the merchant’s son becoming the emperor’s successor. This arc is low on action and plot and aims to show how the rich are treating the poor and scheme amongst each other. It also shows how the world is rapidly changing and how folklore traditions and honorable samurais give their place to profit-centered machinery and laser-carrying mecha. High on intrigue, low on interest, very boring. The third arc is the conclusive battle between authority and honor. Very high on action, there is some romance included and the conclusion is almost the same as in the movie.This series was successful at making me feel the same excitement I had with the original. The unrealistic battles and the middle ark though were overall very weak in atmosphere and drama; they damaged the whole script conciderably. PRODUCTION VALUES The setting is depicted in quite the fantastic way. Cloths, buildings and vehicles are detailed, artistic and lushly. 3D models and lightning/shadowing effects create a dreamy world. The CGs of the mecha are of course very bad because GONZO made them. They move in very robotic ways… and I mean that in a negative way. Voice acting was generally fitting with the characters and I found no real problems with it. Music themes are a combination of traditional Japanese music with westernized action elements. During summaries and peaceful times, the first kind of music is played to build up some atmosphere. During battle scenes, the second kind takes over. It is a worthwhile attempt, if you don’t mind the sudden changes in the origin of the musical tones. Action scenes and camera angles are very Hollywood-made. That means that they are very well made but are also unrealistic. I mean, a few humans with swords defeating armies of huge, laser-armed mecha is unbelievable, no matter how much you try to reason it. But they are awesome if you are still young and will not disappoint those who like epic battles. Other than that, the GONZO effect ruins most of the fun. CAST There wasn’t much character development in the movie and there is not much here, either. When it comes to the samurais, this is rather acceptable, as they are supposed to be strong, determined and seasoned enough to have stopped needing any further maturing. We can even say that they stayed true to their beliefs and didn’t gave up when the new emperor tried to make them join him and become robots. So, it’s not as if their personality was never challenged. It’s reasonable to expect flowing personality from immature teenage characters in anime; but here they already were middle-aged from the beginning; and so they were stabilized. The young ones, Kirara (the peasant priestess) and Katsushiro (the samurai in training), on the other hand, do mature. They both feel love, disappointment and taste the cruelness of the world for the first time. And so, they are very unstable with their emotions, as expected.Plus, all characters look, act, talk and think differently, so none are without personality. Some have a very weak presence but even that is true in real life. So generally, good characters, without much philosophical questioning of their motives. LEGACY Overall, the series was ok. A lot more complicating and action-based than the movie but not so concrete or realistic. The slow-paced plot and the excessively unrealistic battles ruined a lot of its appeal for me, but there was still enough to enjoy. Compared to the total crap GONZO has made over the years, this is quite the watchable show if your expectations are not very high. SUGGESTION LIST Samurai ChamplooRurouni KenshinKatanagatari

Samurais are cool. Mechas are also cool. Deflecting bullets/lasers is cool. Oh and samurai being equally matched against mechas is also very cool. That is what the production team thought when they decided to adapt 7 Samurai into anime, unfortunately they thought that they also had to transform it into something entirely different. Itching for some samurai action? Watch Sword of the Stranger instead, it's 1h 38 min long and a way better experience and use of your time. What really killed Samurai 7 was the pacing, beginning was super slow and ending felt rushed, otherwise the show had some interesting ideas and concepts (like mechanical samurai and shikibito) too bad the show does nothing with said content. Story is decent, hoped more character deveopement less running around. Animation was intersting, at times there's some excellent animation, but 90% of the time it's just decent. Sound is good, some traditional Japanese tunes and some newer ones too. Characters fell to the way side, Ayamaro became an interesting person towards the end, the 4 interesting member out of the 7 die and generally everytime there was a character who could have had more, the show moves on quickly. 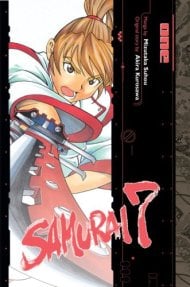