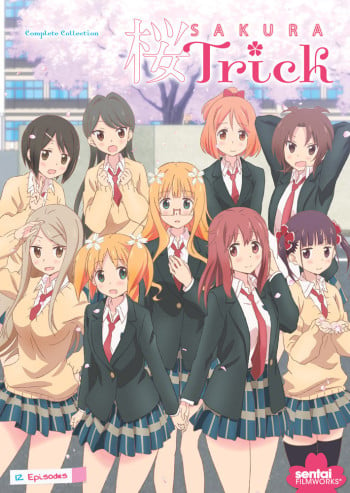 Sakura Trick is ummm hmmm. This show completely goes all out with no intent of looking back at what will go down in history of what Yuri Yuri almost was.

Look; there is no story. Every episode just helps each character get closer to the one they love. This anime focuses on a group of high school girls that are starting to form affection for another female. This topic is pretty iffy with some people (not me) and in other anime the line has never really been fully crossed in terms of what happens affection (physical affection) wise. Sakura Trick says fu$# that, these bit%$es be horny as a motherf#@%er, time to get down. My jaw almost hit the floor in the beginning episode as I witnessed the main couple really get into their feelings. In other Yuri shows there is a hint of restraint and blackout scenes are used when needed. In Sakura Trick no such thing exists since when the time comes, you see all the affection. I was quite flabbergasted that they went into such detail on some of the scenes (again it didn't bother me I was just literally awestricken).

But plot wise it is just a slice of life so it moves quite slow. You see the same gags in each episode so you might get a little bored with the same cycle over and over and over again.

Not too bad actually. The character models look pretty good and there seemed to be a pretty smooth frame rate throughout the entire show. The use of light colors really matched the carefree feeling of the show.

Again pretty average by my standards. There are some somewhat touching scenes later on but I never really felt totally invested. The characters worked well with each other and helped form some funny scenes here and there but it wasn't really a knock-it-out-of-the-park performance.

This show is just really average. If you are into Yuri stuff then you will love this show. However if you are looking for substance, comedy, or character development be ready to be pretty disappointed. It is though very very very kawaii.

- It's hilarious and there's something to laugh at in every episode

- The art style is absoloutely beautiful

Seriously if you like Yuri cute funny anime you should give it a try.

A more Casual Anime with a focus more set on the main characters rather then the story which is a welcome change of pace in my Opinion.

The Main characters (Haruka and Yu) are both really cute an it's basically just a story about them stumbling into love without really noticing it themselves. It's definetly something one needs to like and i can see where this anime can put off people as there is not really a line to follow and more just you watching them getting closer to each other.

So it's basically just watching a to be lesbian couple and i loved it! <3

This show is just plain bullshit. It's just made of random kisses and so much stupidness, i can't believe it.
I'm not joking, really. Romance is one of my favorite genres and I'm not antipathetic towards yuri either but while watching this show i was always thinking why i don't drop this show already. It's just really stupid and dumb.

Don't watch this show, never. Not even when you just want to watch some shit to just chill out or to kill some time because you don't have anything to do or something else to watch. There are a lots of series that are way better to go with.

This was my first Yuri anime, other than Sound! Euphonium (which is shojo-ai no matter what anyone else says). It wasn't that bad but you really can't take it too seriously. This is just a fun little anime about two friends exploring their relationship with each other.

The story is practically nonexistant but that's okay honestly, this anime has other aspects that makes up for it. Each episode is just a combination of two stories that have to do with these two girls. These stories don't really relate to each other much but they're funny and nice to watch. One thing that pissed me off beyond belief was the unresolved character arc between two of the girls in the show. I'm not going to spoil it but this arc was the only unique arc in this show and to see it unresolved was dissapointing. But hopefullly there will be a second season and, even if there's not, there's always fanfiction.

The animation in this show is probably the best thing it has going for it. It's so cute and the characters look really nice. The animation used these white circles sometimes and it was a nice style but felt cheap sometimes. It wasn't anything too bad though.

The opening song for this anime was amazing. It is so catchy and I still have it stuck in my head now. And the voice acting was really good too, I have no complaints. The only sounds I didn't really like were the corny sound effects. They wouldn't be that much of a problem if they weren't used so much.

The characters in this show were dissapointing. They just didn't feel real to me and a lot of them just had one quality that made up just about their whole personality. And there is like no development even though it's about girls going into high school and experimenting with their sexualities. They're all cute though so it's whatever.