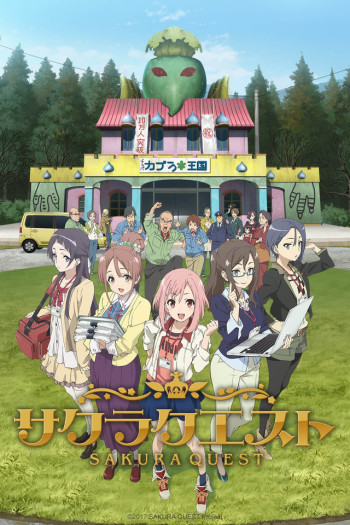 One of the main things that got me to watch this show is it's relation to one of my favorite anime ever, Shirobako, as they are from the same studio, P.A. Works.  However, it would be a big diservice to come into Sakura Quest and expect the same thing from them.  You simply can't compare them because of how different their execution is.

Yoshino Koharu has done everything in her life to move away from a boring quiet life.  She left her small village in the countryside to Tokyo for a more exciting life.  However, things just aren't clicking for her.  She has barely gotten any long term jobs and she's slowly losing faith.  Then, her agency hooks her up with a job in this small country town of Manoyama as their "Queen" to help liven it up and increase tourism to that area.

While not having over the top hyped up moments, it emphasizes all the little things in life and personal growth.  The latter is one of the reasons why I love Shirobako so much.  Throughout the story, every character changes for the better by the end of it.  Each mini arc of the story, while done to help improve the town and its citizens, were personal journies for each character.  Although some felt like they were dragging a bit, it was all progress.

Best part of the animation is the consistent high quality of everything.  While not doing anything over-the-top or having to reinvent animation, you can appreciate the consistency.  Character designs felt real (outside of anime hair but that's all anime).  One of the coolest thing about designs is the sheer number of outfits each of the main 5 characters.

As for sound, they all had an amazing set of OP's and ED's that are just so catchy and just make you feel all happy inside.  Then there was an OST towards the end that was just so adorable.

This is by far the show's greatest quality.  As I said earlier, everyone grows.  That wasn't just about the show's main characters but many of its recurring cast.  Those that don't really do much growing are still memorable in their own right like this awesome old guy who loves butts and wanted to know how to clear his search history.  Everyone was such a great compliment and foil to others.  While one character desperately tried to change the town for the better with varying results, there is another who opposes him bound to traditions.

Whatever this show lacks is made up for with immense amount of charm and personality.  It may not be one of the greatest shows ever, it's still very heartwarming and touching to experience.  If you ever need some light-hearted fun, I'd definitely go for this show.

I've got to admit, this isn't the best anime in the world, and sometimes it fell a bit flat, but all the same it struck a nerve with me: a bunch of protags trying to find their place - and what they want - in the world resonated to the point I was openly crying once the last episode went off. Over twenty five episodes you care for these characters, much like in Shirobako, and I suppose I was finding comfort in the themes of this show as I go through my own tumultuous year, desperately trying to find what it is I want to do. Sakura Quest will keep a place in my heart for that reason.

First off, its not great in PA Works track record. We got Another, Angel Beats, Charlotte and now this thing. I like how they're trying to add variety in their shows but this one totally misses the mark. Today I'm going to explain how and why they missed the mark.

Story: This five girls orginal plans in life were not working out so they all come together to get their town back in order and get the spark the town once had back. Some efforts include: Making people buy their sweets. throwing festivals, having their own tv show, having a popular band play, a matchmaking service, etc.  As you have noticed, none of these events tie in together, its just a jumpled mess. This show is a Slice of Life show, but it adds nothing to the genre at all. One example that changes up the genre is Miss Kobayashi Dragon Maid, where the cast was likeable, had a good story, had dragons in it, and Kana is best girl. But I cannot say the same for Sakura Quest.  The loose bindings that they call a "story" don't work well with their characters either.

Characters: I've noticed something with these characters. They always run away from their problems and someone needs to go comfort them to convice them to get over their problems. Need an example? I got several. First Sanae doesn't think she can put in 110% of her time and effort into her job and what does she do? SHE RUNS AWAY. Then Maki doesn't want to do acting anymore, what does she do? Try to improve her skills? Try to build her self-confidence? No, SHE RUNS AWAY. When Shiori sees that a old lady's house that she knew getting burned down, what do you think she does!
RUN AWAY!! When Ririko doesn't know how to get along with the others in her town and-WAIT SHE RAN AWAY!!! Chitose, Doku and Ushimatsu had a band 50 years ago AND THEY STILL COULDN'T SORT OUT THEIR ISSUES AFTER 50 YEARS!!!

Overall though, I don't reccomend this one. (Also this story doesn't need 25 eps) Watch some other P.A. Works stuff, its way better than this.

Sakura quest is a perfect example of the "constant" anime, what I mean is that it standard, it's enjoyable to watch but does nothing to stand out. Since it's late Christmas Eve and I want to sleep I'll be fast. If you're super bored after 5/6 episodes then drop it, if your just chill watching it itll be a nice relaxing show to watch. Now to the rapid fire detailed half.

Animation is nice, nothing crazy but it still looks good and keeps your attention.

the sound is fine the op and ep for both halves are fine yeah I know it's a running theme,

the characters are actually good, not to one dimensional and mostly entertaining

story it's a SOL it's feels like a hallmark anime almost which is kinda funny, the strangest part is how it made me really a not very emotional dude reflect a little about time passing since the show is over a 1 year span and all the bells and whistles that come with the whole life continues to move and some things get left behind type of stuff. Meh maybe it's the Christmas vibes with the family that's causing this. Anywhoooo

Sawkura quest is a super chill show and maybe a bit emotional for you big hearted people, the ending does feel a abrupt in a good way which is strange for me to say. But hey it's a fun one, thanks for reading this short review of Sakura quest since it's Christmas time I hope you guys have a nice one and have a good day

Now our 5 main female characters also all get their time to shine. Each of them has an arc where they get the development that they need. My favorite character of SQ was Ririko because she goes through the most development. She already makes a great leap at the end of part 1 and by the time the anime ends she has evolved from a dull, shy, following girl to a strong and independent woman who knows what she wants in life. But besides Ririko there was no character that I felt didn’t get the development she deserved.

*My final positive point is my most important one and that were the topics that SQ was build upon. This anime addresses 3 topics that are very actual in today’s society. The first one is the disappearing of small rural villages. The story that Manoyama is slowly disappearing isn’t fiction, this is happening in real life. About a month ago I was in the North of Sweden and we stayed in a small village called Kangos, with 250 inhabitants, in the middle of nowhere. One of our guides, who was a local, told us that Kangos was slowly disappearing. The young people were moving away to bigger cities because there are more opportunities there. So this story of Manoyama isn’t so fictional, it’s very real.

The second topic that SQ used is the generation gap and the merging of old and new. Multiple times we get to see our young and progressive main cast clash with the older inhabitants of Manoyama. The same thing happens constantly in our society. Our parents and grandparents, who were born before the technological revolution, can have a hard time living in this new, internet based world. And SQ showed this in a very beautiful way but it also showed that it isn’t impossible to merge the old and the new. Technology and tradition can live side by side.

And the final topic was the merging of different cultures. The people of Manoyama are very cautious about outsiders, about people with different cultures. Is there anything that is more actual in today’s changing, multicultural world? And like with the generation gap, SQ showed that merging different cultures isn’t impossible and that it can be an enrichment to both parties. For this I want to refer to the Dragon play during the festival and the Dragon song that is so beautifully sung by Ririko in the final episode.

*Now overall SQ was a very complete anime by its end. There were very few loose ties that were left when the final episode was done. But I did find 2 things that weren’t fully resolved. The first is that we don’t know how Manoyama eventually ended up. The final episodes were all about the chance of Manoyama disappearing and we don’t know how the village ended up. Did they get absorbed? Does the name still exist? And a second is that the case of the golden dragon was never resolved because they never found it.

*Something that I always say when reviewing a slice-of-life anime is that it’s a slice-of life anime. Slice-of-life is one of the most difficult genres in anime, you either love it or you don’t. And if you don’t than slice-of-life can become really boring. Also SQ is an anime where not a lot of spectacular things happen, it thrives more using its topics which I discussed.

So as a conclusion, if you’re a fan of slice-of-life anime’s than you’re going to like this anime. It’s very easy to build a bound with the characters of SQ and you will be pulled into their development and yes become a bit emotionally attached to them. PA Works did another great job with anime, I really enjoyed it and that’s why I’m rating Sakura Quest at 4 stars. As I said it’s not the most spectacular anime but for a slice-of-life anime it was very well put together.