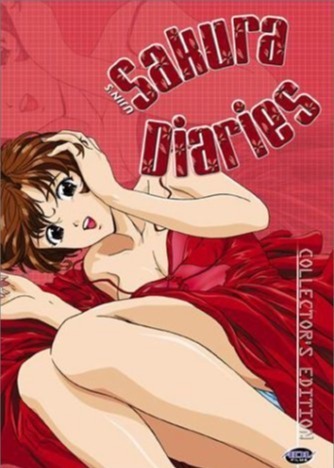 Well this is a strange little OVA... well not very little considering its 12 episodes, which is the length of a regular TV series nowadays, Just goes to show how things have changed I guess.

Anyway this is pretty much an ecchi romcom, much like the ecchi romcoms of modern anime, except it was made in the 90's which means its better right? Well not really =/

Story- So the story follows the life of a College reject and country boy named Touma Inaba, who has his dreams of getting into a good university crushed when he fails his entrance exams and has to enter a cram school. During his stay in the city he meets the beautiful Meiko who he falls in love with, but his female cousin Urara has other plans! Love triangle Commence!

Animation- Late 90's OVA animation is always a plus for me. The character designs are very realistic and detailed. I especially enjoyed Meiko's design. I guess my only problem would be that the colors look a little washed out.

Sound- Nothing memorable, the opening is a soft ballad and I don't even remember the ending theme, or any of the bgm. I actually watched the dub for this and honestly it wasn't terrible... but it wasn't very good either.

Characters- Touma is your basic loser protagonist who hopelessly falls in love. Urara can be quite annoying at times and Meiko comes off as a godess at first, but quickly devolves into a spoiled rich brat. There are some interesting side characters like Touma's "friends" at the cram school, Urara's best friend and another male university student, but they do not get the development they deserve.

Overall- Honestly I thought it had some good potential if they didn't end it the story on a frikin "read the manga" ending. >_< I really hate when anime does this. Esepcailly when said manga hasn't been translated into english. If you just want to see some nice late 90's char designs and animation and have a somewhat decent laugh for 12 episodes, perhaps consider watching this. It is a fairly long OVA though. Some better options would be Maison Ikkoku (by far) Ichigo 100% and Chobits.

A strange and yet perfect encapsulation of the weirdness of 90s-era romance OVAs. It has the complete ensemble of bad character writing, mismatched soundtracks, and janky screen distortions. I have a real soft-spot for this kind of terrible show. This one has the somewhat unique prestige among its peers by having a full cour of 12 episodes to the OVA series, where most other OVAs of its ilk only got maybe 2 during that era.

Something to note before I break down my review - the summary listed on this entry is a bit disingenuous. Not sure if it's the official synopsis that came with the OVAs (in which case that's just another layer of hilarious incompetence from the production staff), or if it's written by someone else, but it implies a different storyline than what's actually present here. Mieko is not a Model, she's just a hot college girl going to the same school he wanted to go to, and Urara isn't really scheming anything about their relationship so much as she just has the hots for the MC and wants him to stop lying. It's not a story about intruge and crafty plots - it's a story about a schmuck lying to save face and trying to woo a girl far above his status, with all of the awkwardness that comes with such a bold lie.

Story: Hoo, boy. I won't avoid spoilers here because not only does my review rely on critical story elements, I frankly don't think anyone considering watching this OVA is looking for a deep story. We start off with the MC, Inaba, arriving in Tokyo and staying in a hotel while he prepares for Entrance Exams for various Universities in the area. His night of study and calm is interrupted when a girl knocks on his door and barges her way in acting like a call girl and flashing him. He ultimately manages to shoo her out of the room after an awkward conversation, but his concentration is broken. The next day, he fails all of his entrance exams, due in large part to the distraction the night prior. However, he's enamored by a hot girl at the most prestigious university he applied to, and lies to her about failing to impress her. That night, he goes to his Uncle's house to ask to stay over, only to find out that not only is the 'call girl' from the night prior actually his cousin who lives in this apartment, but she is completely nude except for an apron when she greets him and serves dinner, all while the Uncle is mysteriously absent. Over the course of the rest of the story, we follow as the MC tries to lead a double-life to both study at a Cram school to re-try the entrance exams in a year, but also to pretend he's attending the prestigious university and spend his afternoons hanging out with his crush. This double life is made all the more complicated by his Cousin who keeps yo-yo-ing between promiscuous and innocent. Awkwardness ensues as some of the other university students start asking very specific questions about the courses he's supposedly taking, and also as the cousin keeps following after the MC and saying weird things about their relationship. Ultimately he ends up getting dumped by his crush, briefly considers a fling with his cousin, and finishes the story by moving in with a friend from Cram school so he can focus on his studies... leaving basically every romance plot severed. It's strange that the MC actually managed to choose the most sensible outcome, yet in so doing created one of the most anticlimactic endings to a romance show. Now, it's going to be hard to separate the Story criticisms from the Character criticisms, simply due to the fact that the majority of story beats are focused on character interactions, so most of my complaints are going to end up int the character section. As for the narrative framework, I'm impressed that they had the balls to make a romance show where the MC ends up without ANY of the girls at the end and choosing instead to just focus on studying. It was a dissatisfying ending, but in context of the situation, it made the most sense for the MC and I appreciate that. The double-life romance was an interesting plot that I frankly think could've worked as the entire show plot on its own without needing the cousin character in the mix. 4/10; Really not too bad for a show like this, but a far cry from anything special.

Animation: True to form, this OVA carries all of the jank that you'd expect from a 90's romance OVA. The screen wobbles, animations break occasionally, and the colors feel just ever so slightly off. That said, this was some of the better OVA jank I've seen from that era - most of the character movements were actually quite fluid, and the art quality was fairly impressive by comparison. What's strange is how shows like this typically try to draw in viewership with the ecchi scenes, yet there were very few of such scenes to speak of. 4/10; Pretty meh

Sound: What was it about 90s OVAs and their strange soundtrack choices? It's charming in many ways, just because of how incongruous and brash it can be. This OVA does seem to have largely dodged the audio issues that plagued most of the OVAs from that era; there wasn't much in the way of distortion or missed timing. The voice acting was amusingly over-done, as they usually were back then, which is a good thing in my book. 5/10; It's always fun to hear some of today's popular voice actors' early work like this.

Characters: This is ultimately where a lot of the issues I have with this show come up. Now, you could argue that a lot of these are 'realistic' portrayals of conflicted individuals who can't quite make up their minds... but to me it seems a bit far beyond conflicted and squarely in the realm of unbeleiveable. My first issue comes from the introduction of the Cousin character; She enters the hotel acting all slutty and flashes the MC, and even invites him to have sex with her (but is ultimately rebuffed and shoved out of the room). Later that night, she greets him at the door in the classic nude-except-for-apron getup and acts super sexual. But, after those two interactions, she does a complete 180 and starts extolling her virtues as a virgin and complaining that the MC is too ecchi, and several times she resists passes he makes at her. Not only is this incongruous with her 'call girl' invitation at the beginning, she even goes as far as continually badgering him for attention and any time he accepts that he should leave her alone, she goes back to flashing him or even outright placing his hand on her breast. The character that she turns out to be for 90% of the show is completely incongruous with the intro, as I don't believe she would ever have done something that forward with him - yet the story basically relies on that first interaction as the way to kick off the plot. My second issue with the Cousin character comes about midway through the story - the MC straight-up tries to rape her in one scene and she gets super pissed (*very* understandably and rightfully so), yet she gets all lovey-dovey on him again literally the next day and never mentions it again. Moving on to the MC - He's surprisingly consistent with a the horny-college-aged kid mentality. Really my only issue with him from a writing standpoint is just that attempted rape scene - it's out of character for him, out of character for the show, and doesn't even really add to the plot. The side characters are a bit ditzy, somehow completely missing or ignoring the MC's obvious lies and panicked expressions, but otherwise they're decent. I actually really liked the Crush's character development over the show - she doesn't end up simping for the MC at all, but still grows and decides to be her own person as a result of meeting him. 2/10; There's a lot more I could say, but I don't feel like writing that much about it.

Overall: This falls squarely in my "Guilty pleasures" box of mediocre/bad 90s shows. If you look at any individual part of this show, it's just middling at best, and downright terrible in many places, and honestly even when you add them all up it still doesn't make for a "good" show. But I still enjoyed it because I have a strange love for janky 90s garbage like this. If you are like me and enjoy watching this kind of thing because there's something nostalgic about that era, you'll like this one, too. Otherwise, you should probably steer clear. 5/10; I *personally* enjoyed it so I'm giving it some points here, but it's not good at all.