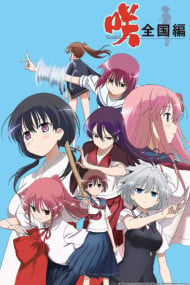 Saki: The Nationals had everything behind it to make it an epic Saki-Palooza.  The best of the best of Japan’s mahjong playing youth (OK, just the female version.  Got a problem with that?) meeting to discover the game’s future stars.  Saki has always been a question of the viewer either being one of those mahjong kibitzers or a purely deviant girl watcher.  But this series would be the much-delayed continuation of the Saki saga begun five years prior.  The Nationals should have been a banquet.  Think along the lines of a half-loaf.  The season contained 13 episodes.  They needed more, much more.  Come on, a sixteen-team bracket played through the quarter finals, and, at the end, eight teams enter the semi-finals leading to the last mahjong table seating the four best teams.   Saki has a chance to watch her estranged sister play Teru in her match ... but she has a panic attack and avoids the meeting.  The series could have added another 13 episodes, perhaps a few more just to nail down some sense of closure.  But no.  After those thirteen, the story has been told ... the end. One of my criticisms in my review of Saki was the treatment of the game itself, the wonder game, Mahjong.  I hoped then that I would get a grasp of the game, but I was only more confused as game jargon passed by without much explanation.  The Nationals did a better job of demonstrating items as ‘pon’ and ‘chi,’ and I figured out the concept of ‘tsumo.’   In gameplay I learned the various groupings of tiles.  A slightly better grasp of the game, but, still, I would have the aptitude for the wonder game to either be the last person picked or the first person asked to just watch.  No mahjong super-star here.  The Nationals could have done something like Try Knights with their quickie-rugby lessons which ended that show, but Saki is more relationships twixt friends and rivals than rules of the game. Another complaint I had about the original series was the portrayal of Nodoka Haramura.  In The Nationals we have a fairer treatment of the buxom beauty.  Perhaps this comes from the fact that there are several characters who were as well-endowed, so this was no longer a major issue.  Still, when Nodoka was asked by a color commentator for her views on the game, teammate Yuki insisted that this would be a 'sexy interview.'  Very few beach and spa shots of the girls, snatches and glimpses only.  The strength of the Saki enterprise is the interplay of characters, not the obbos. Oh, yes, the characters!  The characters this time around are not as frightening as the first round of opponents, but the main feature is their uncanny control of the facets of mahjong.  More a manipulation of the game through powers freaky, supernatural, or semi-divine.  One character, Kyouko Suehara, who led her team to a second-place finish boasted that she had done so without the use of mysterious powers supernal, infernal, or over-the-counter.   This still made for fascinating character studies, particularly from the Eisui Academy, where each girl offered some unique trait, a girl with princess status, a girl overcome at times with fits of languidness, a girl who was a shrine maiden complete with ceremonial mask.  Fun characters as Aislinn Wishart, a foreigner whose faulty command of Japanese is compensated by a remarkable ability to communicate with whiteboard and marker.  Fascinating girls of mystic as the tall and willowy girl from the mountain, Toyone Anetai, who could react to any play offered by her opposition, winning game after game. The intricacies of mahjong still were front and center in the Saki-verse.  Strategy drove the tension as each girl at the table analyzed the possible play and counter-play.  All the weird supernatural stuff as glowing red eyes, transformation into angelic or demonic avatars tended to be anti-climactic over time. Still, the ending ... more games to play.  The hoped-for reunion of the sisters.  All for naught.  The other Saki-related series don't seem to address any possible resolutions, and the 2014 Saki: The Nationals was the last of the Saki-related anime.  So this leaves me in a state of wonder at the wonder game and the bizarre characters that take their places around that marvelous tile-dispensing table. 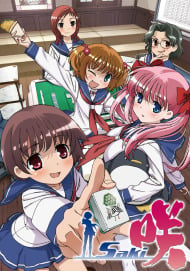 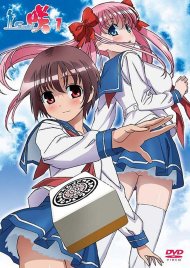 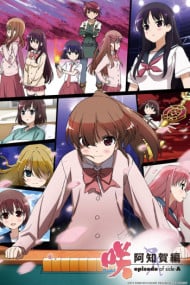 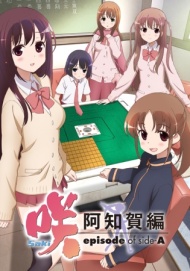 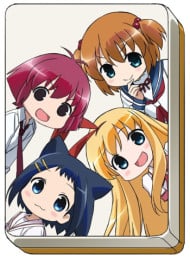 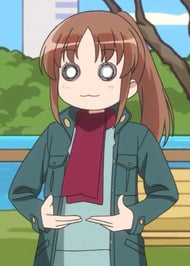 Saki: Episode of Side A - Kuro's Birthday 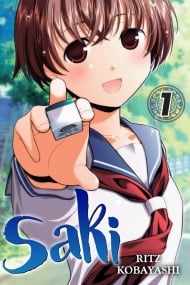