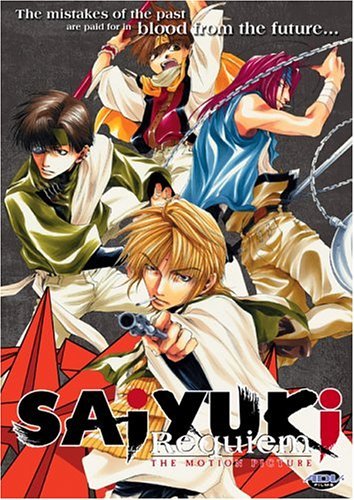 Story
Having seen nothing in the Saiyuki universe, I was a bit concerned I would have something major spoiled for me by watching the movie. Luckily, I was pleasantly surprised by how easy this was to watch.

Though there is no introduction to the cast of characters, the story takes place with the cast of the TV series beating up a demon that was in pursuit of a young woman. As a reward they are invited to her master's mansion, where the "fun" begins. Lurking behind the shadows, this master has some plans up his sleeve that are sinister to say the least. Without spoiling, I'll just say it involves shikigami and a revengeful plot that may threaten all of their lives.

As a virgin Saiyuki viewer, I found this movie to be incredibly entertaining and easy to get into. I'm not sure how the TV series feels, but Requiem is dark from start to finish, which was a nice touch as far as a fantasy series goes. There is little comedy to be found spare the amusing interactions between the characters. In general, the darkness of the plot was far more prominent than the actual fantasy, as well.

Seeing this movie made me want to watch the series, and that's fairly powerful if you ask me. I've seen plenty of generic fantasy in my days, and this was nothing short of wonderful.
Animation
The animation in this is absolutely incredible, which is even more shocking when you find out it was made in 2001. The regular animation is beautiful and reminded me of something from an RPG (looked a lot like one of the Generation of Chaos OVAs, actually). Character designs are very fantasy-like, with plenty of pointed ears and bishounen features. The colors were mostly very dark, given the time of day it took place in (night, for the most part) and the tone of the movie (very dark). CG was used plentifully and was almost seamless, which is shocking due to the time of this movie's creation. Of special note was shots of water and the waterfall, though pretty much everything CG was fantastic. I was very impressed with this animation, hands down.
Sound
The audio was amazing, just like the visuals. The majority of the time the music was orchestral and very, very moving and powerful. I felt like I was watching something Lord of the Rings caliber as far as how effective it was. The rest of the audio was very game sounding, but very good at the same time. Synthy and great. Voice acting was just fine for the Japanese actors, and the dub was actually quite good as well! The characters actually sounded convincing as English speakers, especially with slang.
Characters
Having never seen Saiyuki before this, it would have been nice to have some introduction to the characters. Luckily in ADV's release of this movie, we get to read a character introduction for the main guys, which is terribly useful. The characters interact seemingly like they did in the TV series, but comedic interactions and such were minimal due to the dark feel. The one character to note is the villain, whose past and revengeful reasons are good, but seem a bit stolen from many other series or real life movies out there. In general, we are introduced to a ton of characters who we are expected to know already, and this kind of sucks for first time viewers. Even a slight introduction would have been nice.
Overall
Overall, I was very impressed with this movie. Supposedly it's just a side story to the TV series, and that ended up being a good thing for sure. The animation was beautiful,. the music was very fitting, the story was great and dark, and in general it just kicked ass. My only regret is that there wasn't an introduction about the characters IN THE MOVIE ITSELF, as opposed to having to read about them on the DVD. Highly recommended for any fans of fantasy or dark stories.