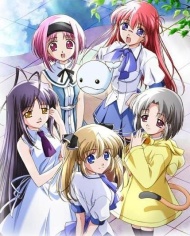 Have you ever seen a whale fly in the sky? For Kuonji, this newly-discovered vision is a thing of wonder and fright - a sentiment not shared by his peers. Under its watchful gaze, Kuonji chats with and hangs out with his somewhat unusual friends. Whether it's with Nina and her striped panties, cat-loving Sacchan, the strange alien Allen or a variety of other busty, skimpily-dressed babes, Kuonji finds himself in the middle of ecchi situations galore!

StoryWatching Saishuu Shiken Kujira is pretty much like giving yourself the ultimate facepalm - except that your hand is covered in knives which are covered in hydrochloric acid. Following in the footsteps of such gems as Alice and Wild Cardz, SSK easily manages to capture a coveted BOS (bag of... excrement) title and take its place on the wall of suck.Picture, if you will, a whale in the sky. Now picture it with bulging breasts and exposed panties....well ok, maybe the two aren't combined, but those two items pretty much sum up the entirety of SSK. This wacky and clever plot device is introduced to us in episode one, and is never fully explained (the complete suckass excuse for a story twist at the end of the "series" doesn't count). The rest of the episodes, with the exception of the last two, follow Kounji as he gapes at bulging breasts, panties, and excessive amounts of loli characters in swimsuits. None of these episodes are tied together in any sort of meaningful way, yet they aren't nearly interesting enough to garner the attention of even hardcore ecchi fans - or so I'd guess. Even if you are the kind of person who would never miss a panty shot and thinks the whale idea sounds peachy keen (what?!), you will still probably be turned off by SSK's home run: the plethora of obnoxious whiny girl characters who, in my opinion, should be shot out of a cannon (after being set on fire) into a pool of gasoline - which is also inhabited by alligators. Each of these elements combines to form a disjointed viewing in which nothing really happens. Kuonji interacts with various girls (usually one per episode), hangs out at the beach, and then at the end becomes involved in some kind of zOMG epic encounter that involves the whale. It's boring, it's uninteresting, and even the ecchi can't save how utterly useless the rest of the anime is. 1 point for the ecchi, -9 for everything else. AnimationThough the character designs are generic, there's nothing bad to say about SSK's animation. Since the point of the series is the ecchi, great care is put into the portrayal of panties and cleavage. Conveniently angled shots are used on a regular basis to maximize the ecchi exposure, and overall any fans of the genre will appreciate what they see. Vibrant colors are used beautifully, and the contrast of characters against a green field or the blue ocean is stunning. There's nothing outstanding about SSK's animation, but its effectiveness for the ecchi scenes alone makes it worth a 7.SoundLike its "quirky" and confusing story, SSK's soundtrack is often comprised of strange noises. Most of the time, however, you can expect much more standard fare - usually light synth tracks. +6 points. -50,000 points for the most-obnoxious-ever voice acting of just about every female involved. Typical whiny moe girls - you know the type: super nasal, hesitant, drippy punch-me-in-the-face-now-please sirens of vomit - manage to offend the ears at least 75% of most of the episodes. Not since Excel's grating bravado have I been so irritated that I often muted the volume. CharactersTepid, boring conversations between mentally-stunted lolis and the nosebleed-prone Kuonji? Check! Random characters thrown in at the end that have seemingly no connection to anything? Check! Relationships you don't care about between people you don't care about? Check!There's not much else to say folks.OverallIf you enjoy ingesting bottles of poison while masturbating to lolis in swimsuits, you might enjoy SSK. Otherwise, the lack of plot, confusing flow of events, substandard characters and grab bag ending make SSK a total failure.

-Plot-What? What plot? There was absolutely no plot to this anime, and there was no jokes or charm to make up for it. There was not a single thing that made any sense what so ever. It sounds like it was written by a drunk third grader. This is supposed to be classified as an ecchi anime, but there was only about two ecchi moments in the entire thing. If this is a Harem either, then it fails at that too. There was no love connection between any of the characters. Also we get introduced to a seemingly endless supply of girls with un-naturally large breasts, without any comprehensible character introductions. Then to make matters worse, they tried to put in a story in the last 4 or so episodes that made absolutely no sense what so ever. There was also a scene where then main character gets turned on by his younger sister falling down on him.Also there was this floating whale, which has nothing to do with anything. This is worse than Canary, and that was pretty bad. This anime makes me want to stab myself with a dull spoon. I wish I was the AVGN so that I could curse up a blue streak on how bad this anime is.-Animation-The animation is completely uninspired and nothing is freaking original, and the supossed "attractive female co-stars" are not what they claim to be. They are not attractive at all. I'm pretty sure that a drunk 3rd grader also drew this anime too. This is beyond horrible.-Characters-Oh my God, these characters are so freaking unimaginative and boring. None of them are any good and none of them bring any entertainment value to the series. Basically there is this one boring guy surrounded by about seven boring girls that have no distinguishing personality traits. We do not get any explaination on who these characters are, like we were supposed to already know them. These characters suck.-Overall-Whatever you do, avoid this anime like the plague, swine flu, and malaria combined. If you plan on watching this, which if you are I would reconsider, bring a dull spoon to stab yourself with as you go and waste your precious time. This anime should not have even seen the light of day and brought disgrace to the anime world. 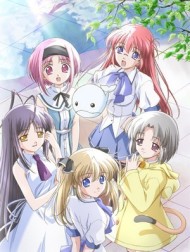