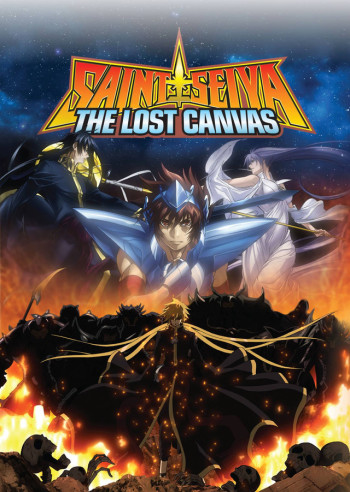 What I also found interesting is that the current incarnation of the Unicorn Bronze Saint, Yato, has a lot more use in comparison to the original series, Jabu. The relationship Yato and Tenma have is kind of like a Ranma and Ryoga/Inuyaha and Kouga kind of one. They are very similar and yet they are always at each other's throats. Despite that, I found it very surprising how their relationship develops in the course of this series from bitter rivals, to cooperative partners that will always have each other's backs.

The series for this season is pretty well evenly paced and I like how it focuses on certain characters in certain episodes, and it's not just exclusively about Tenma. Some of the Gold Saints have their own central episodes and you get to learn about them. Though they will only have short appearences, they do make a significant contribution to the progression of the story.

The villains are still pretty much the same from the Hades OAVs, but still have their own unique personalities and qualities in which they all stand out. The OAV ends at an understandable place and of course a sequel has been confirmed and the way it ends just makes you wish to watch that sequel already. I say this is a very good introduction in the same way the Hades Sanctuary Arc respectively was.

Art and Animation
As one can see, the original art design isn't done by Kurumada Masami. However, he allowed a Shoujo author, Teshirogi Shiori, to do the art for this respective title for the original manga. The anime respectively follows that art style faithfully from what I've seen of pictures on the internet and magazines, and I'm of course saying this because I have yet to read the manga of Lost Canvas. The anatomy of the characters are still for the most part pretty slim with some buff guys here and there. The costume designs are of course very faithful to the original material so nobody can fault that. The hairstyles are thinner in comparison to Kurumada's style, but it still works in contrast to the bodies, faces, and heads. The design of the villains are just as dark and yet still glossy as the Hades Chapter OAVs, but yet some of the characters have their own unique move sets and gimmicks.

As for the action, it's much more fluid and there is more emphasis on direct hand-to-hand combat as opposed to relying on special moves. However, with a much lesser character roster, the match up appeal isn't really that present here except in just a couple of fights. Of course Tenma will have the Pegasus Ryuusei Ken and it's presented in a different angle and not much recycled animation is abused in this. The action is still explosive and exciting, and like I said before, doesn't go to a point where it gets ridiculously over the top.

Music and Voice Acting
What really took me by surprised is the opening theme "The Realm of Athena" by EUROX. Of course in the tradition of Saint Seiya, it is rock with a good set of guitars as a hook, but the song itself is in perfect English. And the qualities in terms of lyrics in what made Pegasus Fantasy and Megami no Senshi so presentable and catchy, and reflects what the show is about, and it's not just some song that's promoting the artist or song, it's about the show itself, and Saint Seiya is one of the rare products to have music like that. It's a very good anyway and has its own distinct energy that relfects the overall atmosphere of the series. The general background music is of course new and is very intense at the right times and very acoustic during softer moments. A lot of the percussions and those acoustics used is also very appropriate to the setting in context to the time and place in a cultural sense so that's a nice touch.

As for the voice acting, I'm not at all familiar with the voice actors of Tenma and Alone. Kakihara Tetsuya, Tenma's respectice seiyuu, does a great job in making Tenma that arrogant but yet caring fighter. It really reminded me of Suzumura Ken'ichi's portrayal of Taitou from Jushin Enbu Hero Tales, a character very similar to Tenma. Shimono Hiro as the voice of Alone/Hades I think has to be the performance that has to get the most credit. You're playing who is supposed to be the most purest person on Earth, and then all of a sudden, becomes the God of the Underworld. He does a great job of a guy who for one minute is convinginly someone who believes in non-violence, and then the next moment is a God that doesn't care about life.

However, a familiar name that most new school fans should know is the voice of Hirano Aya, the voice of Suzumiya Haruhi, as the voice of Sasha/Athena. Of course in comparison to Haruhi, she is a leader and takes charge, but in a more serious situation, she is very authoritive and commanding as that character, but also compassionate and caring to Tenma. She's very serious, but yet calm. The influence of Han Keiko's original performance is also there, but of course the overall voice cast will still never compare to the original no matter how hard they try.

Overall
Well, to overall conclude, do you need any previous experience with Saint Seiya? It does help a lot. You can watch this with a fresh mind and still enjoy it. I say on the downside, it can potentially spoil the original series in some respective aspects. But as I said before, if you do have some familiarity, a certain aspect will be elaborated upon and I thought it was a nice touch. By the time you finish this part of the series, you feel like it's truly beginning. I can't say the characters develop tremendously in an individual sense, but this is made up for by the relationships the characters develop and try to maintain. The original series had a good balance between developing the characters individually and the relationships, but the original series easily had those opportunities. Hopefully when the next installment comes about, there will be a bit more emphasis on that.

This is my favourite Saint Seiya! The animation is better than in the others. I also prefer this storyline because it gives more credits to the gold saints, the saggitarius saint is still the more important but we actually focus on others such as Taurus, Pisces, Cancer...

The only bad aspect  is that they didn't finish the story in the anime, to know what happens next you have to read the manga. Anyways I really recommend this show!

Now warning in advanced, I was a pretty big Saint Seiya (or as they called it here, Knights of the Zodiac) fan back when it was airing in Canada. It was like the dream anime for a kid, along with stuff like DBZ. So when this OVA started airing I was immedietly interested and began watching, if for nothing atleast nostalgic purposes. I was pleasently surprised with this prequel.

Story- So this OVA is based on a manga and is actually the prequel for the original Saint Seiya series. The main story is pretty much a good v.s evil tale and they make it all the more easier to identify who is evil and who is good because they're all color coded. Those in darker or black armor are evil (Hades) and the ones in Golden or silver armor are the warriors of Athena. There is a nice plot twist early on, but its your basic shonen story.

Animation- Easily the best part of this OVA. The animation is breathtaking, I can't imagine the amount of work that went into  drawing little detail of the armor and the character designs themselves are also very detailed and the fighters actually look like they have been training for the majority of their lives and can actually fight and have proportionate limbs *cough*saintseiyaomega*cough*. The Fight scenes are very fast paced and well animated, theres really not much more I could ask for this kind of anime.

Sound- The engrishness of the OP is pretty hilarious, but in a good way. It really gets you in to the mood to watch a shonen battle show like this. The insert songs and BGM can be really impressive at times and the ed theme is just beautiful..

Characters- I didn't expect much out these characters. The main cast is kind of dull IMO Tenma and his friends are pretty set in their ways about justice and what not. I'll have to admit some of the Golden saints and Black stars (I think thats what they were called) have some interesting personalities to make up that.

Overall- A really enjoyable experience, especially if you have seen the first series. The characters and plot have not really improved too much, but the animation has... I would like to say the music too, but I have a soft spot for Bowling for Soup... I'm not really sure why they used a cover song of a 80's band done by a late 90's/early 2000's band but yeah thats what we got for the NA version. Pegasus fantasy is epic in its own right too... I probably should have put that bit in the sound section, but I'm too lazy >_> Anyway if you like battle shonen titles, or better yet a fan of Saint Seiya already this is definitely worth a watch.