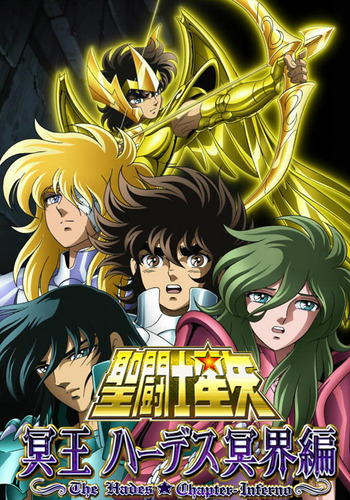 Story and Characters
It of course picks up exactly where the Sanctuary oavs leave off. This time as opposed to the Gold Saints being the central focus, the main featured characters in this series are Seiya and Shun as well as one certain Gold Saint I can't mention due to spoiler reasons in relation to the original TV series, though Hyoga and Shiryu aren't exaclty useless, they are still busy fighting their battles respective battles. And Ikki is still rarely present, but whatever presence he has will be overly significant to what happens in this story. The newer main villains that were introduced in the last oav such as Rhadmantys, are now part of the battlefield as well as a handful of other new characters. And who are some of these new characters? I feel that you have to see it to find out who some of them are, but I can tell you that some of these characters are bad ass.

What also makes this story very great is that it expands the darker tone and atmosphere and still uses intriguing plot twists as it did in the Sanctuary Arc, but I thought what this installment offers I never saw coming many cosmos away. And the ending I thought was a very fitting and suited the themes of bravery, sacrafice, friendship, and brotherhood very well in the tradition of Saint Seiya.

Art and Animation
Well, the qualities that made the animation and coloring in the first oav is still present here. The lighting is still appropriate and I can't say much. The only negative thing I can say about the animation are the dead bodies serving as slaves to Hades. They look super cheap as hell, but in the end, they really don't matter.

The new characters featured are really breathtaking to watch. Granted the diversity of the design for some of the main villains is getting weak, they all have their own unique traits and techniques. The features of the armors are appropriate with the underworld-hell theme. And of course there will be some interesting gimmick characters, though these charcters were kind of done before, they were featured in fillers of the original series, but this time, the characters with this kind of gimmick are a Kurumada-sensei original and he adds his own unique detail and feature to it.

The quality of the action is still pretty awesome and the moves that will be demonstrated by the newer characters are very cool and the namings sound kind of weird, but this is one of those instances where such bizarre Engrish phrases can be sweet.

Music and Voice Acting
The most controversial thing about this anime is the changing of the seiyuus from the Bronze Saints and Athena. Apparently, Kurumada-sensei wanted to change everyone except Furuya Tooru because he thought they were too old for their roles, but the only exception is Suzuoki Hirotaka who passed away between the releases of the Sanctuary and Inferno oavs. I heard he especially wanted to change Shun's original voice actor Horikawa Ryo. Furuya Tooru wanted everyone to stay aboard, and he decided to quit. The fans were very angry about this and tried to petition to Kurumada-sensei to not go with this change, and it got severe to the point where Kurumada-sensei got his legal team to speak on behalf of him to accept the changes.

As for the "too old excuse," I think it's flatout bullshit. Furuya Tooru still plays 15 year old Amuro in the new Gundam games and so on. Horikawa Ryo I thought still did an excellent job in playing Shun in the Sanctuary Chapter. I always loved the tone and the articulation he brought to the character. And I can't speak much for Shiryu's and Hyoga's new seiyuus since they weren't featured enough or gave a certain kind of performance in which I felt they could capture what I think is the essence of their characters. So who was replaced you might ask? Seiya is now played by Morita Masakazu, who might know as the voice of Kurosawa Ichigo from Bleach. But he was casted as Seiya because Kurumada-sensei had him casted as Takane Ryuuji, the main character in the anime adaptation of his first manga, Ring ni kakero. I can agree that Morita does sound appropriately youthful and brings a distinctive kind of energy to the role of Seiya in which it does suit his character, but I think he really lacks this dignified-heroic quality in his voice that Furuya Tooru has and I don't think he comes across as leaderlike.

But the new voice actor who really won me over was Shun's, Kazuya Yuuta. The performance that had me convinced was in the second episode about when he "testifies" to the judge about what sins he's committed and how sin is natural in human nature for such and such reason. He really showed the emotion and compassion necessary that defines the Shun character and I was able to embrace him with that. The only problem I have with the voice is his pitch. It's soft, but yet still high, while with the original performance by Horikawa, it had the low voice where you could tell that he was a man despite his very feminine appearence. Another performance I liked was Konishi Katsuyuki as Ikki. I thought he captured the character well in his own way by being the lone wolf who sticks out and being the "I do things my own way" kind of guy.

The new opening theme featured is Megami no Senshi by Marina Del Ray, who also sings Asu He No Toushi, the opening theme to Ring ni Kakero. The brief church organs that play is very dark and gets you hooked and then all of a sudden the guitars play and you see the saints running at the screen along with the title in the background and you got something that lives up to the original theme song, Pegasus Fantasy. In comaprison to that song, it's still pretty sweet hard rock, but it has a certain kind of diversity with the intensity that it has with being gloomy, but yet there is still hope. The imagery, the panning, and the sound effects that go with the panning just add so much to it and I must say that the quality sometimes makes me argue with myself of which is the better theme song between the old and new one. So the opening theme itself is an instant winner.

The background music is actually still the same so I can't say much about it that I haven't already have said in my previous reviews.

Overall
This OAV will have you pumped up for the next oav and the true ending to the original manga of Saint Seiya. If you want plot twists, then you got what I think is one of the best plot twists in anime history