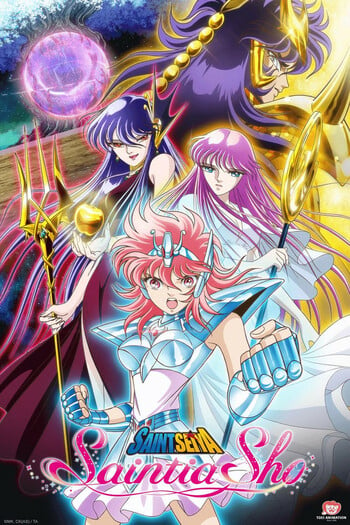 This show is ridiculously bad! So bad that perhaps it's good for the laughs!

Honestly, I'm not sure how to rate this show, it completely misses the mark so much that it just becomes hilarious!  It works well as a parody, except that is clear there are no comedy tags and the creators were totally serious about the plot and mood of the show, but it's a parody all right!

The story is a reconstruction of the original Saint Seiya story, but this time using girls in a Shoujo style that reminds me of Clamp's "X", but it's like beginner draw everything and couldn't quite get the style right, the proportions are all distorted with the eyes so big and the heads so round, or should I say Oval, but not vertical oval like a 0, more like a horizontal oval shape that makes all characters look like a shoujo alien. Pair that with a color palette full of bright rainbow colors, so bright that you will have to wear sunglasses to protect your eyes while watching this show. The setting and backgrounds seem to come out straight out of Candy, with Athena attending school with her knight friends. Most of the movement in the show is done just by panning the characters over the backgrounds, which helps to reinforce the feeling that this is a parody, think Inferno Cop.

Then we have the music which is ok and the overbearing sound effects and screams from the voice actors that try to move this show into soup opera drama territory.

The pacing is so fast that you will go from laugh, to laugh, without a break, except that you are not supposed to be laughing as this is a serious story, or at least it takes itself more seriously than Saint Seiya ever did.

To be honest, I just watched the first episode, one episode was enough for me as I don't think they can keep the comedy going for more than that, but feel free to keep going if you are enjoying this show!

And by the way, this will be an awesome April's Fool recommendation!