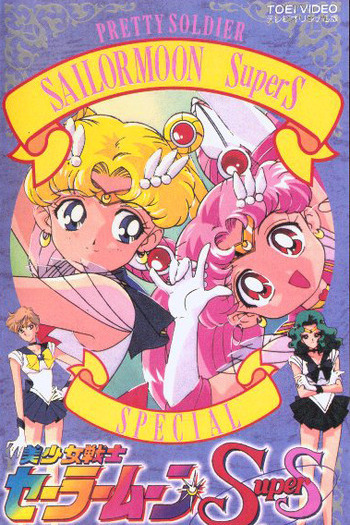 This special is split into three episodes. Also, after the third episode of SuperS, these should be watched. It’s not as… exciting? if you watch it after watching the whole season, as the villains in SuperS make an appearance.

This is basically what it sounds like—a summary of the series. This episode takes place sometime during SuperS, and spends most of its time summarizing the first season of Sailor Moon. Sailor Moon R has a little bit of time as well, followed by a short snippet about Sailor Moon S. Basically, Chibiusa wants to know how Usagi became Sailor Moon, and then she chimes in a little bit about her own adventures.

I thought that this episode was alright. It’s just a summary, so a little boring, but kind of a refresher as well, considering on how it’s been since I watched the first three seasons. But if you do decide to skip it, watch at least the first little bit, and the last little bit. The last bit segways into the next episode; the first bit ties into the end of the third episode.

Haruka and Michiru are at a hotel, and all is not as peaceful as it seems. However, Haruka is sick and bedridden, leaving Michiru to hunt around for clues. While she is away, the new enemy comes to Haruka and attacks. Can Michiru save her?

I say this every time this subject comes up, but I’m not a big fan of the lesbian romance. I’d much rather do without it. Even with that, this episode was pretty good. It was very sweet, and the ending was very touching.

The title of this episode gives it away, but Chibiusa has a new classmate—a beautiful young girl all of the guys fall for. Only, there’s something odd about this new girl, and Chibiusa is going to get to the bottom of it.

Not a bad episode, and, without spoilers, I’m just going to say it’s an interesting sidenight for SuperS. I enjoyed it.

Overall, not a bad collection of shorts.