Alt title: Clearer Than You Think 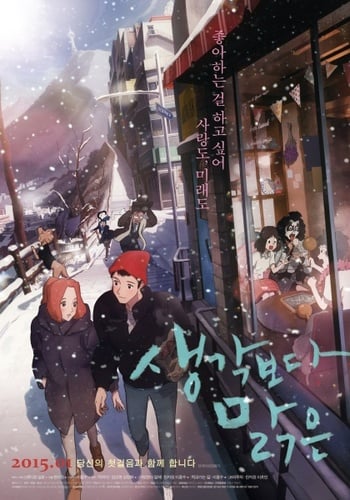 Noah tries to catch fish every day, later even without knowing the reason why. Ivo, the lamplighter, lights street lamps every night and looks after Noah.

My Beautiful Girl, Mari is a story of two childhood friends, Nam-woo and Jun-ho, who are growing up in a fishing village full of unwanted change. With the discovery of a glowing marble, Nam-woo sometimes finds himself in a lush, dreamlike world, inhabited by a beautiful girl named Mari. With more change inevitable, Nam-woo and Jun-ho struggle to cope with reality, even when tragedy strikes.

The Story of Mr. Sorry

An unprecedented media show is on air at a TV broadcasting studio. The show is asking people whether a spider that drove an assemblyman crazy should be publicly executed or not. The spider in question is Je Bul-chal(meaning 'my mistake'), a hardworking young individual who became 'an ear cleaner' because of a precious memory he holds concerning his sister. In order to take a poll about his execution, the story of how Mr. Sorry became a spider is gradually revealed.

Green Days: Dinosaur and I

I-Rang fell down intentionally for fear of losing by Min-Jeong in the race, the only event she was confident in, when Min-Jeong overtook her. She is idling away defying any competition ever since. She gets irritated by TV commercials which are saying people remember only the winner. She hates herself who is nothing. She hates herself called by fill-in of someone. One day, Su-Min grabs her attention. She does not care others and does and says whatever she wants to, a girl from Seoul. I-Rang admired her for her uniqueness contrary to her

A daughter sacrifices herself to restore her blind father's eyesight.

We follow the lives and turmoils of seven outcasted 17 year olds and you--the protagonist. Between the aches of being a girl who's younger than her body looks or a boy who'd rather get into fist fights than give handshakes, we found a piece of ourselves within the outcasted teens that's abnormal. Like a four leaf clover. Which are said to bring luck even though it is a mutant in the sea of three leaves. And so the curtain rises to glimpse at these four leaf Clovers--4 boys and 3 girls.