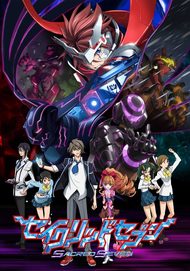 Sacred Seven is your typical "Boy has awesome powers but can't use them until someone else gives him the ability" shounen anime. You've probably seen the same thing happen in anime like Bleach. The storyline follows Aruma, who fits the above cliche by being an outcast with a reputation for violence. Story: With this type of storyline, you have the protagonist joining an organization to fight terrible, ancient monsters that threaten the world around him (that surprisingly didn't seem to catch his notice before hand...). In Sacred Seven, those monsters are Darkstones, and aside from HellBrick, they all seem intent on destroying the world. Aside from the fighting aspect of the anime, Aruma (now being able to use his powers) is gaining acceptance at his school. Apparently, teen angst is a turn off to everyone. And because it's produced by Sunrise, there's a mech too. Animation: The anime is well animated, and considering it came from Sunrise, it's not too surprising. The battle sequences and the school activities are both done with excellent detail. Sound: It sets the tone for the battle sequences, backstory flash backs, and lulling areas of school life. And the title of the OP fits the anime rather nicely (Stone Cold by FictionJunction) Characters: As much shounen cliche as the series has, it does a fairly good job at developing the important characters. While at times, they seem to be cookie-cutter perfect for whatever shounen role they need to play, teh back stories allow them to have some sense of individual personalities.

THE STAFF - Animated and planned by studio Sunrise, which means cool robot action.- Directed by Oohashi Yoshimitsu, who has produced nothing but random bullshit shows in his whole career.Sacred Seven is to fighting shonen what Star Driver is to mecha. A laid back series, full of stereotypes that tributes various shows of the past. It supposed to be running mostly on nostalgia that anything else, and in all honesty it made a crappy job at it. Everything is completely random and uninspired, plus nothing is focused upon enough for us to care. PRODUCTION VALUES It feels like a whole fortune was wasted on making artwork and animation as detailed and smooth as a tv series allows. The transformation scenes, and the battle choreographies eat most action shows for breakfast. Sadly that is far from calling the presentation successful, as it is unfocused and messy. The school backgrounds and the character designs feel detrimental and become boring right away. The battles, as spectacular as they may feel, last way too little and you are never meant to feel the hero can lose if he has seven hax powers in his disposal. No matter how many maid suits and silly robot designs they threw on screen, there was simply nothing behind them to excuse the overall randomness. The soundtrack is made up of forgettable pop pieces and voice acting is ok, although there is nothing in it that would allow the actors to perform any better even if they wanted. SCRIPT The story is as basic as it gets, and if you happen to have seen a single superhero show while growing up you will know right away how things will play out. Some meteorites drop to Earth and have crystals which create monsters and grant superpowers to humans. Some use them in human experiments, others to protect their loved ones, blah-blah, overused stuff I see no point in elaborating any further. In practice you get the good guys goofing around in their school or mansion, before some monster of the week appears, and the protagonists heads there to defeat it with minimal effort and in less than five minutes. There is absolutely no build up or emotion to all the stuff that happen in the show, and the result is complete apathy even if you stare at monsters blowing up buildings. There is a sort of escalation in the form of the heroine’s twin sister and a villain who wants the ultimate power but they happen in such a blunt way that they fail to mean anything. CAST Oh boy, you can’t have a show with more generic characters than these. Some uncaring boy with a secret power, a pretty girl who loves him right away and helps him to unlock it, magical transformations, and predictable shonen battles where the hero wants to protect his friends and wins with hax power ups. There is absolutely no attempt at fleshing them out past the obvious, plus several uniforms are downright retarded. The protagonist’s berserk form is cool but instead he prefers a geek armour with a scarf. The heroine loves to dress like an elegant loli and has an army of fighting maids. She has close to no emotions, yet has the hots for the uncaring protagonist. And so does another girl in his school, for no apparent reason. Add some avenging youths who were used in human experiments and a cardboard villain who want to take over the world and you get a nice Swiss cheese of a cast to fall asleep easier at nights. LEGACY It is a very forgettable and passable show. You’ll have more fun rewatching Tekkaman Blade or Guyver than this most uninspired tribute to them. Even minor details, such as horns popping out of foreheads or armoured warrior flying with hoverboards is far more fun to watch in other shows (FLCL and Eureka Seven respectively). 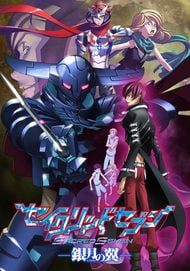 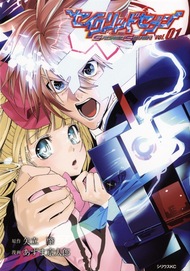