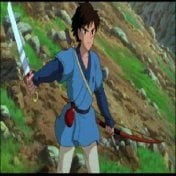 In a post-apocalytic land where humanity is barely hanging on - but actually doing pretty well all things considered, dystopian warlords keep the people down and mushrooms are public enemy number one, Rust is slowly consuming the world, including living beings... a magical wasteland where some humans are physically insanely strong for no reason and weird giant animals exist. This show had so much potential, but the characters are annoying, the technology and creatures combine into something too far-fetched, and the enemies and the good guys have a terrible dynamic and repeatedly can't seem to finish each other off - for no reason. People dying and somehow coming back magically gets old. It just makes me think, "What am I watching? Why am I still watching?" I'll finish it, but only because I've come this far.

What a wild pick for this studio to go with for their breakout animation. I have to wonder if perhaps they were going for visual style and outlandish appearances more than storyline just to try to make an impression, without really understanding how underwhelming this was going to end up. To be fair, every single problem I have with this anime comes down to the writing - Studio OZ did an amazing job with this season and I strongly look forward to their next project. Spoiler warning here - I won't avoid some major plot elements in this review as they're critical to why I feel the way I feel. Story - To put it bluntly, this is a story that has some of the best and most interesting/unique worldbuilding I've seen in modern anime, paired with one of the most tired and boring plotlines ever to exist. For the first 4-6 episodes or so, we get a beautiful look at a post-apocalyptic world with crazy designs and extremely interesting concepts. We get to see threads of political intrigue and a society where medicine and research are so tightly controlled that doctors have to use black market deals just to sythesize medicine. We get to see crazy animals and post-apocalyptic technology that really tickles all of the things I love about this type of story. But then it all gets thrown out the window when the two main characters completely derail their entire adventure over some bullshit feigned bromance-esque change of heart they have that makes them feel like instead of working together, they need to one-up each other on getting themselves killed to save the other - even when doing so is objectively just going to make matters worse for each other in the long run AND the short run. To make matters worse, the political intrigue goes out the window as well, as we see that the Mayor of the first town was actually the big bad all along and suddenly makes this vast world feel miniscule. To top it all off, not only do they force the titular character to commit one of the dubmest self-sacrifice suicides I've ever seen - they have the utter gall to bring him back to life 2 episodes later with little to no narrative weight. The show then ends on a repetitive and grating fight where the stakes are somehow simultaneously "Saving the world" and "literally nothing will change". Very few shows have been able to pull off such a strong about-face with the story that makes me go from 100% excitement to actual hatred, but this one pulled it off in spades. Worldbuilding 9/10, Storyline 1/10; Great setting and initial setup, absolutely atrocious execution. Animation - I want to give props where props are due; Oz really did make a great first impression with their animation quality here. They put their best foot forward and I'm excited to see what else the studio makes down the line. The details here are crisp, the artistry is beautiful, and the animations were smooth and vibrant. The only thing I'd complain about is the Mecha fight at the end, but honestly I don't blame them for that - that's on the writing for creating such a bland-looking enemy. 9/10; Exciting first impressions for the new studio. Sound - Sitting proudly in the "If you do everything right, people won't know you've done anything at all" rankings, I honestly have no strong opinions about the sound design here. It's perfectly suitable in every way. The voice acting is good, but nothing stands out as superb. The OST fits the theme well, but I don't remember a single track. The foley/sfx art never distracted me with bad sounds, neither did it ever impress me. In short, this is perfectly serviceable. 7/10; Simply good. Characters - Hands down my least favorite aspect of this show is its character "development". Not a single change of character felt earned, deserved, nor justified. When Milo's sister suddenly decides she has the hots for Bisco, it makes no sense even in context, and clearly only happens because the plot wanted her to. When Milo and Bisco decide they want to play Suicide Olympics, it was clearly just to set up that stupid death-and-rebirth moment for Bisco, and not because it made any strategic sense for what they were trying to accomplish. In short, this is some of the worst character writing I've ever seen, and I'm honestly appalled by it. 1/10; At least Jabi was a cool dude. Overall - I want to again make it clear that my issues with this work are entirely related to the writing, and I hold no contempt for studio Oz for deciding to adapt this work for its visual style. I just can't fathom how the original author thought that these character developments and plot elements were even remotely good or interesting. I genuinely hope that Oz decide to move on to another, more interesting story to adapt (or even create an anime original) for their next work, rather than a season 2 of this drivel. 6/10; A stellar adaptation of an interesting visual concept, unfortunately saddled with the lamest writing imagineable.

Sabikui Bisco is a very engaging series. The animation is well done. The soundrack also reflects the situation very well. As for the storyline, the premace is like no other. This sci-fi action anime truly inspired me, using its well crafted art and characters to convey the messages they wanted to convey. Personally, I believe that it will do very well in the anime world, once more people have watched it. 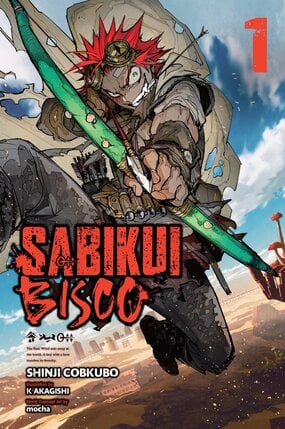 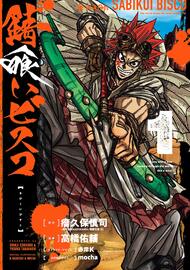