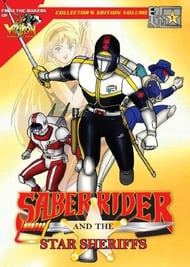 This was a cartoon made in the tradition of Battle of the Planets, another series of that category was (Lion) Voltron. The storyline was altered (original series not really a western), 7ZARK7-based episodes were added, and the character that was chosen to be tital character wasn't really the leader, he wasn't even second-in-command. 7ZARK7 characters include: General Whitehawk Nova (Female Robo-horse) Wolf Vanquo