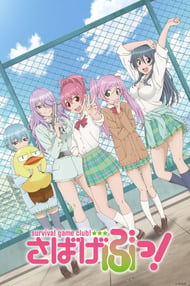 Momoko's family moves a lot, so she's always "that new girl" and the schools she's attended have all blurred together. Until her first day at Aogiri High, that is, where she's rescued by an armed vigilante, assaulted by a platypus and coerced into joining a secret organization of gun-toting female commandos. Okay, maybe that last one is really just the school's survival club, but the platypus is real and so are the extremes that club president Miou is willing to execute to recruit Momoko. Can uber-jaded Momoko's body armor-clad heart resist the charms of a girl who's all too ready to whip out her twin Desert Eagles in defense of another girl's virtue? Especially when it turns out that Momoko has her own talent for air pistols and senseless violence? 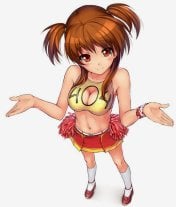 I enjoyed C3, and this is no C3. There are no tactics, almost no battles personal or otherwise. And they are openly and completely unapologetic for it.  What they do have is complete and over the top laugh out loud humor.  The animation is pretty normal, and the characters are unencumbered by any sort of personal history or baggage. There are 3 individual and unrelated vignettes per episode. But oh my god is this thing funny. It’s both crass and imaginative. The airsoft part of it is almost irrelevant other than a vehicle to give the characters guns with which to shoot each other with. And there is no guarantee that they will even be used in every story.  Don’t watch this for the airsoft. Watch it for the lollies with the hand strength of eastern mountain gorillas.

I received this show for Secret Santa 2014. The first thing first; whoever you are who told me this was a slice of life: it is not. This is a comedy show that is split into 2 or 3 individual parts an episode. This being a comedy, however, gives me trouble, since reviewing comedy is more difficult than any other genre.  Story: There is not much of an overall story in this show; it’s formatted as a few mini stories in each episode. The jist of it is our main character, Momoka, gets pushed unwillingly into a "survival" club that participates in glorified and fantasized airsoft battles. For the most part, the characters demonstrate good gun safety.  They seem to make an effort to not have the characters have a finger on the trigger unless ready to shoot. Once in a while they make an odd comment, like the one about some gun being more powerful than an automatic pistol in an early episode. Every once in a while a new story introduces a new character, and the writers are good enough to bring all the characters back at least once into the anime again, but their choices seem odd. Also, the story reminders that it was just fantasy every time a fire fight broke out was obnoxious. The comedy is a mixed bag, and they sometimes do a few tired jokes. One story spends its entire time making comments about nattō, which really does not do anything for me since I have no experience about nattō at all except when some anime makes a joke about it. They made a housewife joke like FMA, but I could not tell if they were doing it as homage to FMA or not. They also have the generic toast in mouth gag in there at some point as if it was a checkbox on a forum they filled out. There was also some joke about breaking a tampon applicator that went straight over my head. I am assuming it was about that. That is not really an area I know much about.  I did end up chuckling to myself quite a bit throughout the episode, but that seemed to do more with the show’s just-throw- jokes- at-the-wall-and-see-what-sticks mentality. Because of that, the mini-episode within an episode did really work out here. Usually I prefer more of a slow burn, but that would have been a detriment to what they were working with.  5/10 Animation: This was probably Sabegebu's strongest asset; much of the comedy came through visual gags. I never noticed any odd screw-ups that can take you out. The pastel colors, while looking great for what seemed to be a shojo styled show, felt at odds with the content at times. However, that may have been intentional for the humor of it. I find it difficult to go more in depth on this one since the animation was neither outstanding nor awful.... perhaps I should have written more/better notes...this is my first time reviewing an anime like this... 7/10 Sound: Uhg, the outro was obnoxious every single time; it was just painful to listen to. After listening to the Intro once I skipped it every time after that. That was just fluff for the show; the intro wasn’t bad, but it failed to get me hyped. Voice acting was very solidly done. The only thing I noticed is that the old lady characters all sounded exactly the same, and was voiced by some young person trying to sound old. Sound ques for the gags seemed to be well done, and the bullet shots felt real-ish. For example, there was a person fantasizing about their airsoft gun making noise but did not realize how loud those guns actually are. The one time you do hear a real gun go off is startling by the loud boom. 5/10 Characters Again, the characters are challenging to review. , They never really had a chance to grow, and they are all flat. Since the show is 12 episodes long, this is probably not an issue worth complaining about. I did want to know more about the model character, Maya, but they seemed to use her as the fodder who always dies first gag, so we never got to learn more about her. Our main character Momoka did demonstrate some growth; she went from a somewhat shy character at the start to a much more present person, being entertainingly ruthless all the way through.  Unfortunately we ended up with one obnoxious character, their platypus mascot; was just obnoxious all the way through. Though the writers wanted the platypus to be cute and unique, it ended up being neither well. Pheneus and Ferb did both better. Then, near the end, he platypus brought in a crab mascot as well. I don’t know; it was just odd and felt like it added nothing to show. 5/10 Overall the show is an enjoyable romp. Although this is not a show I will really recommend to people. It is not a masterpiece of comedy, but then it doesn’t try to be, either. Any weak stories are short enough that you can just watch it it for the one or two laughs you might get, and move on to part B or part C which will probably be better. 6/10

As of far I've only seen the first episode and -being an airsoft player myself- was kind-of left with a cringe by the complete lack of respect for the sport -from my point of view-, as where C3 proved a lot more competant in its display. Anyway, I cannot recommend this if -like me- you have this sport so much at heart (Or the sport is so much in jeopardy in your country) that anything that drift away from common sense towards it makes you mad. To those people I would say go watch C3, lot more enjoyable in that regard. 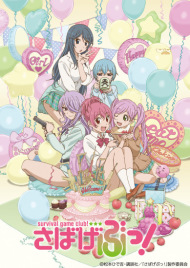 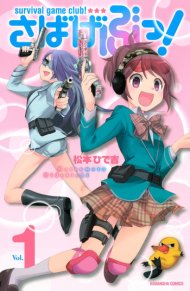