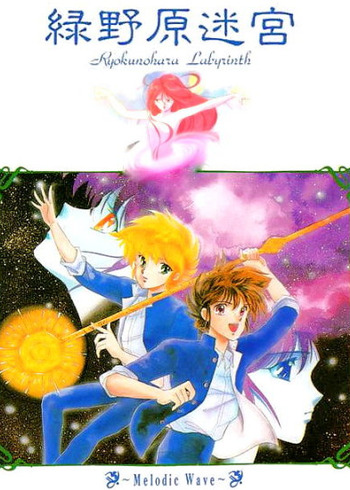 Story
So, we have two guys: Hiroki and Kanata. They are very close friends, and perhaps something more. Let me first debunk the myth that this is a yaoi anime. It really irritates me that people see anything that could be a HINT of shounen-ai (male/male love, not sexually) and label it yaoi. OH MY GOD TWO GUYS TOGETHER STAB MY FACE OFF YAOOIIIIIII!!!! In reality, there isn't anything that even comes close to being yaoi, and barely anything that might hint at being shounen-ai in the first place. The subtleties in the OVA do make you think that there is a shounen-ai thing going on, though.

In any event, Hiroki gets hit by a car, and suddenly all sorts of crazy things happen. By crazy I don't mean interesting, I mean things that make no sense and aren't explained well. We are introduced to an evil spirit of sorts (a naked woman), who for some reason has ties to the guys. Then we have the fact that there are two Hirokis, and all sorts of other nonsense that is poorly explained and is just.. weird.

I honestly feel like this OVA was a combination of 6 or 7 different OVAs, all of which had a few minutes pulled from it and then it was mashed together in a giant mess. The pacing is absolutely terrible and transitions between what is going on is ridiculous. For example, the entire middle third of the OVA is some sort of weird music video type thing that shows all the school kids hanging out, the school suddenly transporting to space, etc. None of this is possible nor does it have anything to do with the story! I'm still wondering what the point of that entire section even was.

In general, bad pacing, a very convoluted and confusing plot, boring characters and otherwise suckass-ness made this a not so interesting watch.
Animation
Visually, the animation was OK but the character designs left much to be desired. The bodies were skewed with very thin limbs and pointed bodies, with huge eyes and foofy hair. Backgrounds were remotely interesting but nothing special, and there was a high percentage of nudity (with nothing really shown). I don't know, the animation just didn't impress me in this. It looks old for sure, but it also didn't stand out in any way to have a more positive score.
Sound
The audio was some of the funniest I've ever heard, sounding more 80s than most things I've seen. One of the extremely cheesy tracks even had a robot voice in it! I got flashbacks of my childhood and then laughed heartily, as it sounded utterly ridiculous in the OVA. Weird sounds are scattered throughout the OVA as well, one in particular sounding like the robot when he moves in Chrono Trigger. Voice acting was fine.
Characters
The characters unfortunately were not developed and/or were not entertaining in any way, due to the length and the strange story that was imposed upon the audience. We do see a little about Kanata and Hiroki's past and why they are so close (sort of), but that's about it. We see several other classmates that are really not an element of the story at all, and then there's the evil spirit herself. We know essentially zero about her, why she's so into Hiroki, or why she is doing the things she is doing. But do we care? Nope. The story is so bizarre and unfulfilling that we care little about the characters who inhabit the OVA, so it's just as well that they are terrible as far as deep characters go.
Overall
Overall, Ryokunohara Labyrinth was bad, period. At first you think it'll be a neutral 35 minute romance, or schoolkids show, or even a tragedy, but it ends up being something far more weird and unappealing. I can't say enough how strange and confusing the story was, and the ending is equally as strange. Bad character development and not so great animation round off a generally bad OVA. So do yourself a favor, don't bother.