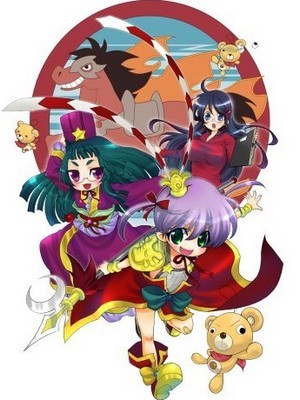 StoryPicture the scene. A forest clearing at dusk: two disfigured crones stand hunched over a cauldron, plotting and cackling and plotting some more. Into the bubbling mixture they toss eye of newt and toe of frog, wool of bat and tongue of dog. Their cackles become shrieks as their evil magic takes form. Yes, these witches are none other than KiraRin and sothis, and from their unholy brew, still dripping with the pungent juices of its own inappropriateness, rises my latest TACO commission - Ryofuko-chan. Nevertheless, I put their mocking laughter to the back of my mind and approached the anime with an open mind. As it turned out, I needn’t have bothered. After an average first episode, the OVA tails off into self-repetition and the sort of gross-out toilet humour that would make a four-year-old tut in disapproval. Whether it’s molestation, children vomiting and peeing, or a pair of homosexual stereotypes who make Hard Gay look enlightened by comparison, Ryofuko-chan is packed to bursting point with stomach-turningly bad taste and enough unfunniness to kill an army of clowns. Any jokes which might cause the viewer to crack a smile are repeated ad nauseum, and end up wearing as thin as Dian Wei’s hair. Which, incidentally, is more of a Three Kingdoms reference than this supposed parody ever makes. When it’s not busy being the animated equivalent of Seltzer and Friedberg ramming their fingers down the viewer’s throat, Ryofuko-chan shamelessly peddles egregious fanservice, mostly involving the titular character and her friends in bathing suits, lingerie, or the altogether. The fact that the fanservice is so blatant and unabashed means it might at least appeal to the lolicon demographic but, for anyone else, it should be nothing short of disturbing. The plot - should such a word be appropriately assigned to a bunch of inconsequential, unrelated happenings - is an utterly confused mess. The OVA is divided up into 8 smaller stories, with characters coming and going as they please without any exposition or narrative. Many characters are woefully inconsistent from one story to the next, such as Kan’u, who spends one story being utterly befuddled by cars and other modern inventions but, by the next time you see him, doesn‘t bat an eyelid at the sight of a handheld camera.AnimationRyofuko-chan’s animation defies belief. Specifically, the belief that a 2007 OVA should look halfway decent. The title sequence is often an anime’s piece de resistance but Ryofuko-chan’s would pass for an effort from the early 90s. The background art can appear adequate, but on occasion it is inexplicably rendered in a completely different style to the rest of the animation. This causes the backgrounds to sometimes clash with the characters, or even with themselves. Foregrounds are ugly, appear stuck on as an afterthought, and sometimes pay unintentional homage to Scooby Doo-esque repeating corridors. And then there’s this. The motion is barely adequate and often jerky, with more stills than a Dr. Dre song. It is a well-evidenced fact that Ryofuko-chan was never going for the immersive, painstakingly detailed animation experience, but when the jerkiness infests something complex, such as Ryofuko’s two-coloured headdress, it reeks of low-budget Western cartoons of the 80s.SoundInterestingly, I heard that Norio Wakamoto was arrested shortly after finishing work on Ryofuko-chan. Why? Because he stole the damn show. Disappointingly his boldest efforts to carry the OVA on his shoulders like some kind of vowel-stretching Atlas count for naught: a turd is but a turd, regardless of whose shoulders it befouls. The remainder of the acting is unremarkable, with the characters’ voices all fitting comfortably in stereotypical molds and not even venturing out of these for some fresh air or a pint of milk. The soundtrack isn’t exactly going to sell many CDs, but at least this means that it never pokes its generic head far enough above the parapet to be annoying. The OP, however, has a novel sound and measured energy to it, marking the closest point that the anime comes to being cute or parodying cute, or whatever on earth it was that it was trying to do before it got buried under gallons of its own liquid waste.CharactersWhen Lu Bu and Chen Gong were captured and executed by Cao Cao, they probably would have considered that the low point in their lives. However, Ryofuko-chan manages to send them spinning in their graves, not by forcing them into the frames of elementary school students, but by presenting them as unlikeable, single-minded buffoons with all the self control of a dog in heat. I would describe the remainder of the cast as stereotypes, but that would be far too generous, as stereotypes at least have enough recognised features to explain their use and reuse. The secondary cast in Ryofuko-chan are shallower even than that. Rena is just mysterious, Nami is just quiet and Ms. Matsuoka is just big-pair-of-breasts-with-luckless-woman-attached.OverallThe basic conceit behind Ryofuko-chan - that a Three Kingdoms-era general should possess the body of a young girl - is far from terrible, and promises parody and character comedy. However, because the characters are so spectacularly awful and wit so conspicuously absent, these goals become unattainable, and the show ends up leaning on its feeble, worm-eaten crutch of gutter humour. Instead of actually trying to be good, the anime sets new standards of dreadfulness and then smashes through them with the deranged glee of a viking carrying a sharp axe and a pocketful of crack. Ryofuko-chan’s most appealing feature - aside from Norio Wakamoto’s performance - is that, at four 30-minute episodes, it is mercifully short. The worst attribute of the show, however, is that it is memorable. Catastrophically, mind-decayingly memorable. While other poor shows slip into the obscurity that their abjectness merits, Ryofuko-chan is a blowtorch of awfulness, which will burn into the viewer’s memory indelible records of the lousiness that it cheerfully parades. The "won’t watch" feature was developed precisely with unredeemable crud like this in mind.

I can be fairly short judging this anime. It's tripe. There is no story, no defined characters, let alone any development, and the ecchi is far-fetched and too obvious. The whole shebang is unattractively animated to begin with. The humor is absurd, but like the ecchi: too far-fetched. It doesn't hit home like for instance in Azumanga Daioh, which is similarly absurd, however different - in a good sense. This just leaves one with a feeling of "what the flying fuck did I just watch, and I wish it had been something different." 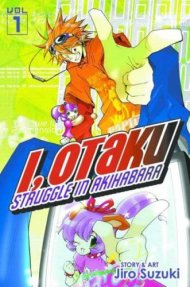 I, Otaku: Struggle in Akihabara 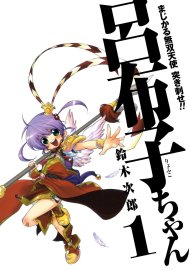