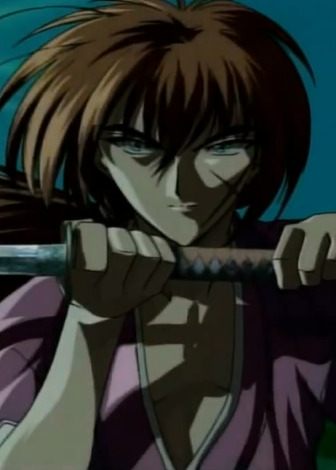 First and foremost, this episode should only be viewed after you have experienced the entire 94 episode series. If you view it as a single episode apart from the rest, then I imagine it would be a low-rated disappointment. This review is based primarily upon this statement.

Anime was ridiculously expensive in the USA back in the 1990's and early 2000's. It is around the latter (circa 2005) when I had acquired the full bootlegged DVD version of the Rurouni Kenshin series, which included The End of Wanderings (episode 95).

I will be very vague about the plot of this last episode in order to not give away any spoilers. It tells the brief stories of all the main characters post-conflict. Kaoru and Kenshin spend some personal time together away from everyone else. She is worried Kenshin is going to leave and go back to being a rurouni, a wanderer. Sanosuke and Megumi spend both some meaningful and humorous time together. Yahiko is working at the Akebeko restaurant with Tae and Tsubame. There are a few flashbacks of some of the more significant moments in the series near the end, which concludes the series' end.

In terms of animation and art style, there is nothing different about this particular episode that sets it apart from the rest of the series. The quality doesn't wain from Studio Deen's representation of the original manga. Where is does differentiate itself from the other 94 episodes is the live action scenery that is included only in this episode. From a general visual standpoint, it's unnecessary and seems a little out of place. However, I believe that the studio was trying to end the series with a sense of realism to it.

The sound is primarily calming and peaceful, which is the mood that is trying to be set in conjunction with the select live action scenery. The ocean sounds are especially relaxing, while the ending music is energetic to reflect the happy-go-lucky nature of the characters.

The history and development of these characters happens throughout the entire series, so very little is new, except as you're watching you're wondering if Kenshin will be staying with Kaoru or not. Are his days of wandering truly over? Her dreams and the glimpses into the past make you wonder how Kenshin truly feels and wonder what he'll ultimately decide to do.

One episode reviews can be difficult to critique. In the end, there is a sense of peace that is being presented to the viewers throughout this entire episode. There is no conflict, no violence, nothing reminiscent of practically every other episode in the series. The serene atmosphere feels deliberate and is only enhanced by the soundscape, but slightly diminished by added live footage.

Personally, it was a surreal moment as it made me realize that this beloved show of mine was drawing its final curtain. It is far from the most exciting episode. However, as a conclusion to a great anime series it highly succeeds in conveying that the end is sadly here, and the characters will go on living peacefully as if their entire story was a work of non-fiction; something that really did happen. Thank you Studio Deen for taking me on this grand adventure known as Rurouni Kenshin.