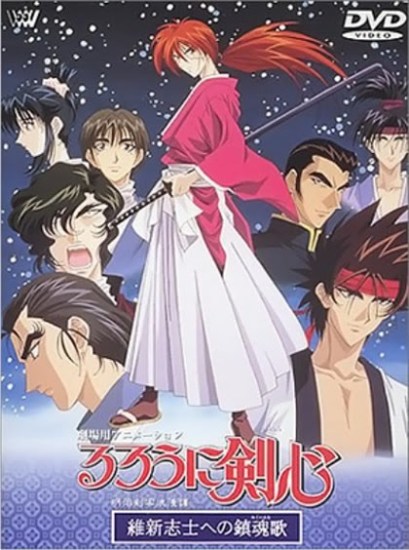 Pretty boring, and removed from the rest. It really has nothing to do with the OVAs and is more similar to the show. However it is alot worse. The story could have been quite good but it is not handled that well.

Lower in standard than the rest. You would expect an animated film version of an anime to have beter quality than the show. Surprisingly though it is the same. This means that is is not quite as good as the other OVAs which it will measured up against. The starting sequence is good but the animation never reaches those heights again.

The music is very good though. It sets the scene well and heightens the emotions, even though these are overplayed slightly. The voices are only O.K.

All just thrown in for a film really. If you haven't watched the series then this film will not make much sense.

Watch if you need completeness, not as good as rest. There is the simila tragic consequences that seem to follow Kenshin around. If you enjoyed the show you should watch this, but not really otherwise.

Plopped awkwardly is the middle of season three, this movie should serve to fill in some holes before a spectacular ending, but from the looks of it, I'd say it was a way for Studio Gallop to unload episodes they were working on before the show was moved to studio Deen.

As with most of the stories in Kenshin this one deals with, oh shocker, people wanting to take revenge against the government who betrayed them. Likewise, yet again, these people are lead by a charismatic leader (Takimi) who's number two is really out to betray him and take the glory for himself.

The spin is that the leader and Kenshin have a direct connection, as Kenshin, back in his mans slayer days, killed his best friend when they initially fought against the government.

The episode, err "movie," plays out as every chapter before has, complete with these idiots shouting out their techniques before hand and wondering why their opponent knows exactly what they plan on doing.

They let a great opportunity to show much more of Kenshin's past fly by. We get to see one tiny aspect and that's it, and for the most part that's just a single fight of Kenshin's with Gentatsu.

An attempt was made to see Yahiko branch off as his own man, but that lasted only a few moments. Similarly they try to interject Saitou into the story (who lets face it is the best character in the series) but as quickly as he showed up in the film, he disappeared.

For the most part the animation stayed true to the series. There were some things that were a bit off, like the comical amount of blood let out by everyone attacked. Likewise at times Yahiko and Sanosuke, when animated in non-standard movements, like eating, seemed as if they were drawn by someone who just heard a rough outline of what they were supposed to look like…..who had just done a whole lot of drinking.

Other than those little items I'd say nothing changed. Most of the minor characters are still very unimaginative (with Toki looking exactly like Kaoru in a different outfit and a few characters resembling Sanosuke) and the scenery is recycled from dozens of episodes past.

Even looking at the film as it's own product, and ignoring the series before it, I find the voices to be absolutely horrible. Yahiko sounds like someone much older than his current age, he's got the look of a ten year old and the voice of an awkward seventeen year old. Likewise Kenshin's voice doesn't fit his demeanor, gone is the happy, always look on the bright side Kenshin, and in comes kind of a snotty arrogant tone to him.

The opening theme is pretty awful and a big change from what we knew from the series. I joked that they used the Japanese Wayne Newton to do the theme Kimi Ni Fuereru Dake De for the series, well they went one step further and got Japanese Robert Goulet, with another tortured vegas lounge style song.

The ending theme is kind of hilarious, it starts off and your first thought will be "No, this can't be going where I think it's going?" but it does, oh boy it does. Posion-esc Nineteen Eighties Power Ballad, Japanese Style! Now I'm not saying it's good, cause it's the exact opposite, but it's sure entertaining.

The rest of the music used throughout there film is standard Kenshin fare. A few flutes, a piano or two, airy and sad, they ticked every box.

One thing that threw me off were the multiple, and incorrect, pronunciations used for certain words and names. At one point they refer to the Meiji era as "Mee-Jee" and at another point Kauru called Sanosuke "Sano-Sue-Kay."

Personality wise not much has changed in the characters. Sanosuke and Kaoru aren't in the movie enough to have much of an impact or have any revelations about their characters, likewise can be said about Saitou, who is starting to seem more and more like a main character and someone who would be interesting to focus on.

Kenshin is the same old Kenshin, but we do get a little look at his past, though it's not very informative and pretty much shows us in detail what we knew all along about his past.

The new characters are more of the same from the series too. Former soldiers/samurai/pig farmers betrayed by the government who want their revenge, essentially the adversary from every Kenshin adventure.

The only person who had a bit of a character shift is Yahiko, as we learn about his father and how he  somewhat turns against what he's upheld until the point, as he agrees to go out and kill to avenge his dad, something Yahiko of the series would most likely have been against.

There wasn't much to make this more than a combination of a few episodes from the series. As a movie or OVA I'd expect something new to be added to the story or to cover a significant part of a character's backstory, but this was just, well as I said, a long episode.