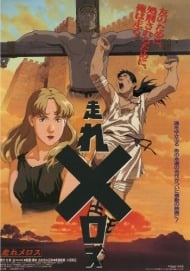 In the year 360 BC, when Melos left Syracuse, all he was after was a ceremonial sword for his sister's wedding. Once there, however, he received much more than he bargained for: a charge of treason against the king, and an execution date in 3 days. Wanting only to return to the village to see the wedding, the aloof Melos thus accepted a deal: his friend Celine would take his place and be executed if Melos did not return in time. Now, with only 3 days and countless obstacles in his way, he must run with all his might to return and save the life of his noble friend before he is executed...

An adaptation of Hashire Melos by Osamu Dazai

StoryThe score of 8.5 is solely based on one thing: this story was incredibly original! I've literally never seen anything remotely similar to this, and that deserves a high score in my book. First of all, the story takes place around the year 360 BC, which is fairly unusual in itself for an anime series. Combine that with the fact that it's based around the Greeks, and you have something truly unique. Now, admittedly, I've seen a few things that seem to take place around ancient times, such as Arislan or Arion, but nothing explicitly based on the Greeks. In general, the majority of the story revolves around Melos trying to get back to Syracuse in time, encountering various obstacles in his way. This turn of events makes the movie turn out to be quite a suspenseful watch, since you never know till the end (obviously) who is going to end up dying on the crucifix. The story also is told as a flashback of sorts -- pay attention to the first conversation which takes place in the movie, or go back later and re-read it. This made the entire thing much more effective for me. One thing I will say, however, is that the pacing isn't so great. I wish it would have either been more suspenseful, or totally slice of life in Greek times, which is what it was half of the time. For being almost two hours, it would have been nice for something a little more interesting sometimes, or for it to have been condensed into something slightly shorter. For example, there is quite a bit of exploring that Melos does once he gets to Syracuse, which on one hand is nice because we get to see city life and interesting people, but on the other hand, it usually didn't end up contributing to the story in some way and was just filler. For series, I don't mind filler, but for movies, I'm not so lenient. Anyways, regardless, the story was still completely unique, which is why I still think it deserves a high score in this category.AnimationThis is an extremely rare movie, so I'll admit that what I saw might not have been the best quality. Nonetheless, the animation wasn't Run Melos' strong point by any means. While the visuals and artwork weren't bad, they weren't fantastic either, hence the fairly average score. The only thing that I felt was a definite plus was the fact that the Greek cities were so well detailed and interesting. Truly the highlight of watching this movie was the immersion into the ancient Greek culture, and the animation helped immensely with that part. Character designs were generic as far as anime goes, but were still interesting because they were dressed in traditional clothes from that era and looked the part by all means. Colors used were not so vibrant and bland, usually darker shades. No CG was used, and there were no explosions or anything outlandish to compare animation quality to. Good animation for the detail and scenery, but fairly typical by all other standards.SoundI tend to give 6s in the music category if the music isn't bad, but isn't good either. Usually a score of 6 means that the music was decent, in the background and used when needed, but wasn't inspiring or unusual in any way. This is definitely the case for Run Melos. There was one track that was used fairly frequently that was catchy and appropriate, but all the rest of the music (synthesized beats, for the most part) tended to be forgettable. Decent, yet uninspiring music makes for a 6 in my book. Voice acting was good for everyone, and there were a few actors that I definitely recognized from other works. CharactersThere are only a few major characters in Run Melos: Melos is the most obvious. He's a very large goofy man who seems to be nothing but a giant teddy bear as far as anger and violence. The poor guy just wanted a ceremonial sword, and then gets accused of something he didn't commit! To top it off, he doesn't run away once he sees his sister's wedding -- he tries so hard to return, just like he promised, to save his friend's life. Celine, his friend, is probably the second main character but we know considerably less about him. I'd say he's the only person that's developed even a little, as we learn about his past and why he acts the way he does. There are a few other random secondary characters, such as Lysa and Calipas, two people Melos meets in Syracuse who try to help him out. For the most part, though there are a few good characters, they just aren't fleshed out enough to warrant a higher score. They don't have very set roles so I can't even rate it highly for filling their parts. It would have been nice for more complex relationships to be developed or more backgrounds to have been revealed. Yeah, it's only a movie, but there was so much filler that I think it could have been done, replacing other parts instead. OverallRun Melos wasn't fantastic by any means, nor was it something I'd watch again, but I still think it's worth seeing for how unusual and unique the story was. You won't be wowed by the animation or excited by the music, but you might find it interesting, as I did, to look into the life of the ancient Greeks just for 2 hours. And hey, if you like rare things and want something unusual, this is the movie for you anyways! So yeah, check it out if you have time and need something to do -- at least it's unusual, though it does have its negative points as well.

Looking for a breath of fresh air? Need a break from the usual genres? Congradulations fellow weeb, here is something different! The plot may seem simple (two men become friends by chance, and their newfound friendship is instantly tested to the extreme), but the emotion that goes into it is so strong that I felt stabs of worry whenever Melos was in trouble, and I was sucked into the story. I'd watch this again just to listen to the credits theme. 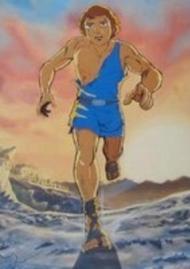