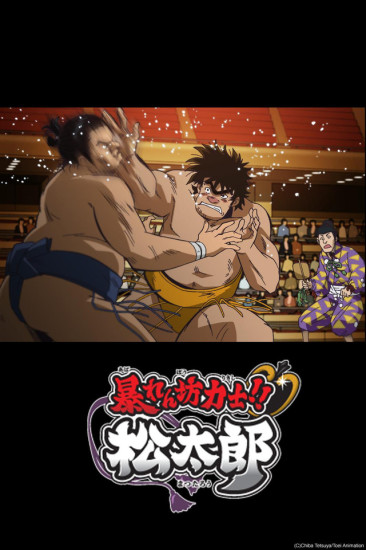 Did you ever watch something originally to find out about a certain sport or activity which you are too lazy to read about it?  Well, this is why I decided to watch Abarenbou Rikishi!! Matsutarou.

Matsutarou Sakaguchi is a career student who seems to have only 2 ambitions in life. Eat and fawn after a teacher who has all the dimensions of a piece of paper on the ground. Right from the get go, Sakaguchi drinks heavily, kidnaps a woman, endangers a life, wrecks a car and even takes candy from a kid.

He is essentially one of the bigger assholes that I have seen as the star protagonist.  Some might say this is a refreshing take on a fighting/sports tale. The main lead is not a loveable guy with natural talent, he is instead a giant dick with a lot of raw strength. The only flaw is the fact that his growth is a LONG and arduous task that takes over 10 episodes before he does much redeeming.

The audience they were trying for is hard to figure. It has a lot of toilet humor. When poor Tanaka shows up, there is a chunk of fart jokes, all throughout the title Sakaguchi is either picking his nose or ear. Yet still there is a lot of homage to traditional Japanese entertainment. Sumo itself is an older form with many traditions, but then there is the 70-80's pop star ballad played in the OP.  Many children will have this go over their head, but do I really want a character with no redeeming values as my lead?

As for story, it is not exceptionally deep. Sakaguchi basically falls into being a Sumo wrestler which is good, because he is a delenquent that the town fears save for an old man who is as close as a father figure as Jackass has had. Soon he is whisked away in a far fetched plot forwarder to a Sumo lower ranks style training. Because this jerk has a raw tallent. In fact the ending does feel as if it was maybe supposed to be longer, but luckily someone yanked future paychecks to make that happen.

Anyhow, the animation is mildly bad to piss poor. The character designs are ugly, which is fine, but outside of Matsutarou, they look like the badly drawn extras in the background of an 80's anime.

So, would I recommend this? Well, if you want to know more about Sumo, read a book.

Just in my opinion I very much like the characters and story, though Matsutaro is usually led by greed his bulkiness and roughness is what excites me the most about his character, with everyone else tolerating him on the side line and him being oblivious to it and does what as he wants to his own will, makes a rude but fun to watch character, His character overall reminds me of Kazuma from Konosuba. Knowing that characters are mean is a downside though, There should be more depth with that attitude besides him not able to stop cause he is big, Matsutaro is poor and has his mom work alot, to show more sympathy for his family would've been nice, with him going to be a sumo in tokyo to help his family get more money than rather being in tokyo for his crush, Overall the story is quite fun to watch with good comedy, mainly focused or caused by the main characters, The sketchiness of the animation is very great too and I love it, I rate it 7 out fo 10 just because depths need to be explored, but I do not see this anime as a "Waste of time" at all, I see it as a fun going action anime that is enjoyable.

Wasn't great, but not as bad as other reviews imply. The last couple episodes tie it together and the abrupt ending feels right, not lazy. It was a nice anime to watch and just relax with a few chuckles here and there.