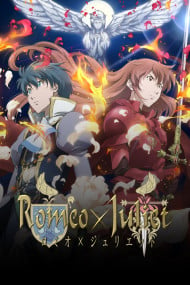 StoryBecause Shakespeare's most famous work has undergone infinite versions, retellings, and adaptations, one could do almost anything with it and succeed. (Heck, I even imagined an underwater Romeo and Juliet in which Romeo is a shark and Juliet is a dolphin. I should work for Disney.) Studio Gonzo has an extremely unsavory track record - with only one truly respectable anime under their belt - but this is Romeo and Juliet. You cannot mess this up.... unless your name is Baz Luhrmann. Alack, but in true Gonzo fashion....... a potential masterpiece manages to fall under mere mediocrity. It doesn't start that way. To be sure, the first eight episodes are superb. For starters, the innocence of Romeo and Juliet manages to be charming and endearing, rather than cheesy and embarrassing. The liberties taken, such as telling the story mainly through the eyes of Juliet and adding a certain pizzazz to the conflict between their families, adds flavor to the original tale. Even the "Red Whirlwind" business and certain character swaps failed to put a sour taste in my mouth. The interesting new elements, however, were quickly drowned by slow pacing, inadequate characterization, and the series' ultimate undoing that makes its sudden introduction in the ninth episode. I've once said that only one thing could truly ruin this series, but I was wrong. Quite a few things can. The crux of Romeo and Juliet is not just convincing that the two characters love each other, but convincing the viewers of their tragedy. In the former, the series succeeds. Plenty of blushes, "I love you's," kisses, and other such scenes with Romeo and Juliet suffice. The series fails, however, in portraying why viewers should care. Too often episodes do little to propel the story forward (for example, there is a late episode in which certain characters act in a play). This is unfortunate because the two lovers spend an important amount of time separated. The crisis begins, however, when science-fiction rears its ugly head and almost turns the show into something unintentionally humorous. Not only was it dreadfully out of place, but it was unnecessary; all the crap dealing with the Tree of Escalus and Ophelia could have been left out and we would have a much better show. AnimationConsidering Gonzo's love of obnoxious and flashy animation, I was surprised by Romeo x Juliet's rather subdued animation. The character designs are pleasing to the eye and the two leads are cleverly color coded. Juliet is associated with dark reds and Romeo with bluish greens. Fight scenes are well animated and the animation for the ending theme is gorgeous. There is some very bad Cgi used later in the series. SoundThe opening theme is a fantastic mellow song that complements the mood for the series. The first ending theme, however, is quite retarded. A hard rock song for Romeo and Juliet? Get a clue. Voice acting gets the job done. Kudos to the seiyuu for Romeo. CharactersHad the characters been more sympathetic, perhaps the glaring flaws in the story could have been ignored. As it is, though, the two main characters are nothing more than vaguely likable. Furthermore, certain side characters behave completely out of character; Lady Hermione, in particular, behaves so erratically that I am convinced Gonzo just didn't know what to do with her. All in all, the characters are neither terrible nor exceptional, just disappointing. Overall....and in the end, so is the series. As for its standing with other Gonzo shows, well, it stands next to Last Exile, meaning that it was an extremely disappointing experience, yet it manages to be better than their other works. Reluctantly recommended. 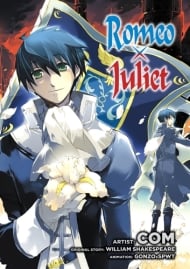