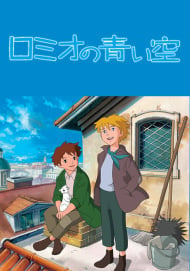 Rumors have it that a man called "The God of Death" wanders from town to town buying children from poor families, sending them off to the city of Milan where they must work as chimney sweeps and never return home. An innocent, kind-hearted boy named Romeo finds himself in this unimaginable situation, courageously selling himself to the God of Death in exchange for money to pay his father's medical bills. Shortly before arriving in Milan, Romeo forms a friendship with a mysterious, intelligent boy named Alfredo who is on the same path. Upon entering the city together, Romeo and Alfredo must learn the hardships of chimney sweeping, standing up to gangs, protecting those that they love, and keeping their promises.

For those not seeking a long review here it is: This is an engaging anime with great pacing, wonderful characters, and brilliant story. You won't regret giving it a try! Don't let the age of this anime put you off. Romeo no Aoi Sora is an endearing anime which doesn't fail to deliever action, romance, heart-felt moments and more. Perhaps, in comparison to other 'action/adventure' anime, the pacing will feel a little slow. However I found the pacing of Romeo no Aoi Sora to be almost perfect; natural pauses between some episodes and others that leave you hanging create a balance for all types of watchers. Whether you like your anime all in one chunk or to saviour it over a few weeks, Romeo no Aoi Sora won't disappoint. Despite being quite old Romeo no Aoi Sora has 'aged' well. It's worth noting here that anyone on the fence about watching an anime focusing on a chimney sweep, need not worry. This anime is so much more than that. It is about loyality, friendship, and overcoming hardships. The story, and the characters, are wonderful. From the antics of children, through to more serious subject matter, Romeo no Aoi Sora handles them well.  Story: There are various arcs followed in Romeo no Aoi Sora, following not just main protagonist Romeo, but also his friend Alfredo. While contenting with the pain of being seperated from their families the cast content with street gangs, tragedy, revenge and the people they work for. The stories of Romeo, Alfredo, Angelette, and even minor characters are engaging and interesting, the threads and relationships evolving over time. Conflict is used to great effect here, and in varying ways, and the story doesn't have to work too hard to engage. Characters: Even the minor characters go through development in Romeo no Aoi Sora, perhaps at times more drastic ones than the main. Romeo is a kind, helpful boy. His honest nature is pure, and surprisingly not irritating. Perhaps he is too kind and honest. Alfredo comes with his own set of troubles but is intelligent, charismatic, and somebody Romeo looks up to. Angelette is overly kind too, never embittered by her lot in life. Yet there are other characters who are less than sweet too.  Setting: Realistic to a point, althrough the adults are sometimes a little too stupid, or weak at times. The backdrop however is great, seemingly more than a cardboard cut out. It's clear this place isn't made up, and is therefore believable.

Here is such a golden, heartwrenching story that all I can advise you to do is Watch. This. Anime. In my opinion, it is the best piece produced by Wold Masterpiece Theatre, and the intro theme gives me chills. (Dunno, I'm weird. This isn't new though-) Some people may be put off by the dated animation style of this series, however it did not bother me at all or detract from the viewing experience! The lack of detail in the character designs is made up for by the characters' heartwarming personalities. You fall in love with these children who are doing their best to survive through tough times by relying on each other. Romeo is too innocent!!! Ah! I've already listened to the entire soundtrack to this series thrice, though the truth is I may rate the enjoyment level of the music higher than others as I am a sucker for instrumentals... I will always think of this series while eating my chicken alfredo. T_T

This was the first, and possibly the best, World Masterpiece Theater anime I've watched.  If you have to watch just one WMT anime, this should be the #1 pick. Story Taking place in 19th century Europe, young Romeo is looking forward to a competition in his small village when they are visited by a man known as the "God of Death", who takes an interest in Romeo.  After a series of events when Romeo's father refuses to sell him, in order to save his financially failing family, Romeo agrees to go with the God of Death to become a chimney sweep in Italy...even though kids are known never to return from the job. Characters Romeo - An honest, helpful, energetic eleven year old boy who puts others before himself.  No matter the hardships he faces, he always tries to do the right thing and keep his word, as well as adjust as best as he can while keeping in mind those around him.  He and Alfredo form a group of chimney sweep kids called the "Black Brothers" (due to the soot) so they won't get bullied by the local gang of kids, the "Wolves". Piccolo - Romeo's "pet" ermine (who, for some reason, always has its winter coat) who sneaks into Romeo's pack when he departs and thus winds up in Italy with the boy.  He's describec by Romeo as impish and a trickster, but his presence has helped in some situations. Alfredo - The first boy Romeo meets on his way to Italy, and his first friend (who winds up becoming his best friend).  He's book smart and loves to read, and possibly might even have an eidetic memory.  He's a natural born leader, but still often defers to Romeo. Luini - The God of Death, who buys children and sells them in Italy in order for them to work as chimney sweeps.  He's a heartless and cruel man, who shows no qualms about his job. Dante - Another friend who is slightly impulsive and has a big ego.  Despite that, he's also helpful and often means well even if things don't always work out. Of course, there are many more characters...but I feel that in anime like this, meeting the characters as the story progresses (rather than knowing ahead of time) is a much more immersive way; it also makes it more of a journey even though there is very little traveling. Sound and Animation Probably containing my favorite opening and ending songs of all of the WMT anime, the music matches perfectly with the scenes in the background as well.  The song which the Black Brothers come up with and sing is also heartfelt and done well. The animation is also well done.  I don't recall it suffering from as many flashbacks to prior episodes like many other WMT anime have (if it did, I skipped through them and don't remember them).  Really, the only issue I can recall having with the animation is Romeo's character design looking a little too feminine (sometimes, I forgot Romeo was a boy due to the design). Overall I rarely give very high ratings to anime, and the WMT anime are notorious for creeping along the "average" line (with the exception of a couple).  This was the first WMT anime I saw, as stated above, and opened up my world to the other WMT anime due to how much I enjoyed this. It had struggles, friendship, and more.  Heartwarming and heartbreaking scenes, and a couple incidents which had me sobbing while others made me laugh. There's an actual narrator, which might not be everyone's cup of tea; at times, it's as if the woman narrating is reading from the book it is based on (or just a book), and often gives away hints of what's to come.  Even so, when the events hinted at do happen, it's still animated and acted in such a way that the narrator doesn't take away from the series. I'm typically not a fan of an overall narrator, but in this case I felt like it worked very well.  It felt like I was listening to a book in addition to watching an anime.  Now, I'm no fan of audiobooks because I'm not an auditory learner, but it felt almost like a "story time" without being patronizing to the viewer. As for age categories on this...I'd say that it's safe for most ages.  Due to there being some child abuse and child labor in the series, I wouldn't recommend this for children younger than six.  Parents who want to show this to their children (children under the age of 10) should probably watch it with their kids as well...mostly just to be able to explain some concepts that children that age might not completely grasp. That said, it's an amazing journey of friendship and even morals and hope.  There are a lot of messages of sticking together and teamwork, as well as a glimpse into what life was like in the 19th century. There really isn't much else for me to say here without ruining or spoiling it, other than this anime is among the list of anime I highly recommend to others. WMT reminds us that anime doesn't have to be "boobs and butts" to have interesting characters, immersive settings, and gripping plots.  Romeo's Blue Sky, particularly, is a shining example of that.