Romance of the Three Kingdoms - Reviews 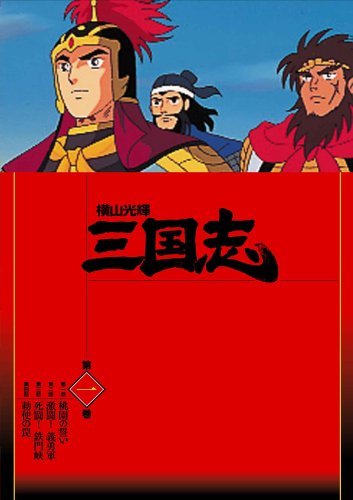 ANIME MINOR JEWELS SERIES
Full list of the review series can be found on this page, 3rd post from bottom:
http://anidb.net/perl-bin/animedb.pl?uid=251338&show=userpage&do=blog&blogid=29009&page=0

The thing that stands out here is the origin of the story. This series is based on the most famous Chinese epic story/novel of all times, the Romance Of The Three Kingdoms . I have read a big summary of it and I must say, the series is faithful to the original script. It is a fairly low budget production and it pales compared to the Chinese live action adaptations that came a decade later but since this is its only true faithful version in anime form, it deserves some praise. Especially for the year it was made, which was in all terrible for the industry because of their previous recession. Furthermore, if you look around there are many other anime titles which take names and plotlines from the same epic but in all honesty they use them only as excuses for heavy on ecchi goofy comedies. As crude as it may look, this show tried with the minimal funds it had to offer something great for the year it came out and at the same time didn’t scrap quality for sleazy shallow entertainment. I am pleased with it.

The novel is 700 years old, very long in duration, it is based on real historical events, involves hundreds of characters and describes a 100-year-old war around the unification of the vast and chaotic land of China. Since it was written millennia ago, the story differs a lot from typical anime scenarios and the way of life, as we know them today. Here are a few examples:

-The heroes don’t always win. This is not a typical scenario of good triumphing over evil.
-Women exist only as wives or traitorous seducers. You won’t see any female warriors or irritating girls hitting dorky boys at all.
-Allies constantly change sides under the pressure of politics and honor. Compassion and justice are just used as political maneuvers and don’t help someone choose sides.
-Lies, secrets, betrayals, hypocrisy, murder, slander and ass kissing are absolutely normal to use and no one accuses someone just for using them. Everything is allowed in war.
-Strategies, terrain advantages and not numbers decide the outcome of battles. Good tactical advisors were more important than a million soldiers.
-The generals of the opposing armies were not afraid to fight in the front lines. Plus, killing the leader of an army was enough for a war to end, since the soldiers didn’t have a saying in the conflict or shared their leaders’ ambitions.

It is a very realistic scenario, if you compare it with the superficial American movies we get today. It makes The Lord Of The Rings appear simple and childish. It takes the combined efforts of the Iliad, the Odyssey and the Argonaut Campaign for a story/myth that is equal in length and quality. So, the story should normally be a 10 without a doubt.

Sadly, it is not as several scenes have an erratic pace. The series does not cover all the events of the original script and many characters either disappear from the story for no given reason or change personalities too easily. Still, leaving some directing issues aside, it is a very cool story.

An epic story of such proportions deserved graphics and sound, reminiscent of The Twelve Kingdoms anime (similar name and civilization) or the movie Hero , starring Jet Li. Having played a little of the Dynasty Warriors games, I expected very detailed cloths and long battles. Being a big fan of the Suikoden games, which have, ahem, “borrowed” many story elements, I expected supernatural powers and attention in personal dramas. Unfortunately, the series is pretty low on all these departments.

- Almost all the characters have simple cloths, making peasants and nobles to look the same.
- Facial variety is narrow, making most characters to look alike (that sounded like a racist comment).
- Wars are conducted in quite simple and boring ways. There is a lot of repeating footage on every battle.
- Stale images, absence of bloodshed, poor visual effects and uninteresting music themes take away all hopes of considering it exciting.

There are hundreds of characters in the story. That would be a good thing if they had been given different mannerism, personalities and purposes. Unfortunately again, they are not.

- Most of them are stunts that appear in a few episodes and then get killed or disappear without a trace from the story.
- Many characters have a sudden change in intelligence. Some suddenly become charismatic leaders and super tactical advisors and others who are veteran warriors suddenly become country bumpkins who are tricked by the simplest trap.
- All characters have the same goal: Get sneaky, earn authority, raise army, kill all who oppose, conquer lands, become emperor of China. It gets boring after seeing it for the 50th time.

If you have read the original novel, the anime seems like a poor attempt at representing the events in it. It could become a lot better if there was something else, besides a good story, in order to be kept interested. Without it, the series ends up feeling average when it should feel epic.

SUGGESTION LIST
Dynasty Warriors. Action/strategy videogames, based on the same story.
The Twelve Kingdoms. Similar name and atmosphere but with a lot more dramatic story and characters.
Suikoden. rpg/strategy videogames, based loosely on Romance of the Three Kingdoms and Heroes of the Marsh.
Legend of the Galactic Heroes. A war drama/space opera with an equally perplex story and a cast of thousands. It eats almost all sci-fi series for breakfast.

I wanted to make my 1000th anime special so i went for Romance of the Three Kingdoms!

It's everything I ever wished it could have been... well almost :P I've been a huge fan of this series since I can remember. With the video games and real life tv series. I loved watching and playing and learning everything i could about these stories and characters.

It needed to be LONGER! It really did end way too soon for me. They skimped out imo on the "last" battle.... which isn't even the real last battle but meh :P I know WAY too much about these stories so that might be why i wanted more than I knew the anime would have done. It really ended quite early on in the stories and that saddened me quite a lot.

There was a serious lack of blood that was really hard to deal with for me. When you chop someones head off there needs to be some fluid spillage! It felt at times that the show was aimed at children but in all honestly i thinkg the story is a little advanced for a kid to really enjoy. I can't see a child sitting through 3 eps of strategy talk. The word "bumpkin" was used WAY too much! It got soooo annoying. It was really annoying when they would refer to top generals as bumpkins... like really why do that... use a real insult boys! :P

Aside from these 3 TINY complaints, everything else was amazing. The story of Wei, Shu & Wu is simply well done with all the characters.

Zhang Fei being the whiny drunk little brother (Liu Bei + Guan Yu famous brotherhood oath) was highly amuzing to me and he ended up being one of my favourite characters in the anime. It's actually hard for me to not like any of the characters actually cause even the bad guys were awesome. I've always loved Lu bu's story and he will always remain a favourite nemisis of mine. Cao Cao is also another beloved pain in the ass character that i will always enjoy. The only thing that could have bothered me but i didn't overly let it is the way they looked. it was always pretty different from what i was expecting. Zhou Yu (favourite character) not having long pretty hair was a HUGE let down :P

Either way simply well done all around and I loved it to bits. I must rearange my top 10 yet again. I hope someday that it will be remade with todays graphics, added stories, and BLOOD! LOL I can dream! But seriously that would make me SOOOOOOOO happy.

edit: i got my wish and it's currently going to be airing fall 2009!