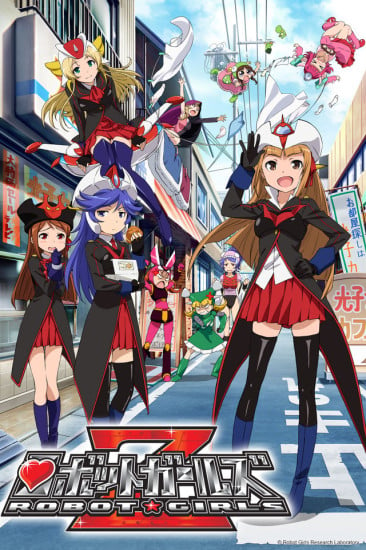 Robot Girls Z is a short comedy that many would disregard based on its name and or looks (that’s it when they aren’t wondering if it’s related to Dragon Ball Z) but, is it really as bad as it looks?

Like in many shows of this kind, there’s almost any plot and instead there’s plenty of slapstick comedy to fill the voids. Some shows manage to compensate the lack of plot with interesting characters; a good sense of humor; and/or a proper pace, but that’s not the case of Robot Girls Z. All the characters in this show are forgettable at best, most of the jokes are unfunny to the point not even the ecchi bits can add something of value, and the episodes are definitely too long for their own good.

The animation was good though. While it wasn’t spectacular it was definitely well-done and fluid. Also the characters were well-designed. They definitely reminded of the mechas they were representing, though if there was one that deserves a special mention that’d be Baron Ashura. Whoever thought about making her look half-tomboy half-girly girl should get a medal.

Sound-wise it was ok. The opening and ending, as well as the soundtrack, were nice albeit forgettable. The voice acting was fine and fitted the characters.

Overall, this show is the perfect example of what you’d get if you throw Plastic Nee-san and a ton of 80’s mecha shows into a blender. It may sound like a great idea but the excessively long episodes and poor execution turned it into something dull enough to make you wish it was already over. At least it was pretty.

This review was written for DAMC Anime Marathon #5