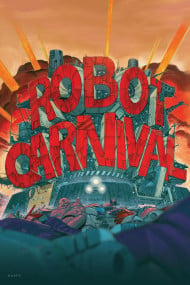 There's something about voiceless or semi-voiceless films that just doesn't feel right. Charlie Chaplin was successful because his actions spoke more than he ever could have. Here, the animation doesn't really manage that. The result is awkward-moving over-acted characters. Robot Carnival is weird. This anthology is a collection of short animated films concerning various robot-related scenarios. Some are better than others, but overall there isn't a great deal to be said for any of them. It took me two attempts to get through the whole film, and if it wasn't for a pre-existing interest in concepts of the cyborg then I may not have at all. Stylisticly, on the plus side, some scenes and designs remind me of Battle Angel Alita, Wind of Amnesia, and even Naüsicaa of the Valley of the Wind (Not coincidentally, as Miyazaki's key animator Takashi Nakamura is on the direction team). Perhaps my dislike is a cultural product: the DVD never got an English release, though it was apparently shown on the Sci-Fi Channel several times. For this reason I had to put up with a terrible fansub version which managed to turn most of the very few spoken sentences into garbage - "sometimes I will be jealous strongly of her" and "I have never get mother love" are two random samples. Funnier still was the curious incidence of subtitling the English-speaking character in A Tale of Two Robots. "Next time, you will see my electric self-propelled artillery" becomes "Next time I'll come with automatic robot!". One story which did stand out was Cloud, directed by Mao Lamdo. Animated very simply with what looks like a pencil, there was a certain charm to the piece. Although much too long, there was an element of robot and human philosophy there which I couldn't help but appreciate. The robot child walking endlessly, unchanged, through major world events, catastrophes and conflicts, oblivious, head down and braced against the wind is powerful. Its later transformation into an alive, sensuous human being, suddenly aware of its surroundings and able to transform them, is a hopeful outlook for the cyborg man, if somewhat unrealistic. The comments made by the Madonna-lookalike android in Presence were also noteworthy. "I know myself very well... what is my purpose?" It seems that the android has exactly what we lack – a vision of itself and its surroundings that is completely objective. The rest of the segments have little merit other than the big names of some of the people involved in their conception. How is it that a gifted person such as Kōji Marimoto (Fly Peek!, Animatrix) can produce something as boring as Franken's Gears? And why would someone involved in mega-hit (though I'm not a fan) Mobile Suit Gundam (Hiroyuki Kitazume) produce shōjo trash Star Light Angel? Having said that, Katsuhiro Ōtomo's opening and closing scenes were well designed and animated, and somewhat interesting, too. These are the parts of the film that make best use of the decadent budget and unusually high animation quality (Presence is especially notable for the quality of animation, where Yasuomi Umetsu (Kite)'s style is clear and vivid). Lastly, for a film so ostensibly dependent on the soundtrack, it was curious to find most of the OST to consist of the most decade-limited music known to man – 1980s disco. The animation, too, had a very 80s anime feel. Having been made in 1987, I suppose this is excusable (the animation, not the music). All in all, not really worth it.

This is a superbly executed thematic meditation on the many possible situations, outcomes and ethical and philosophical implications of robotization (and AI) that's becoming more and more important in our time. This anthology is highly artful and thought-provoking, and it communicates its stories and ideas very well without spoken lines.