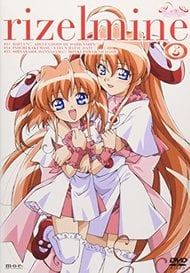 StoryThe one thing that attracted me to this series more than anything else, was the basis. Whatever synopsis you read for Rizelmine, it will always promise a high-paced comedy rollercoaster (which, at times, it delivers). Twelve year old genetically-engineered Rizel marries a fifteen year old boy, Tomonori Iwaki, much to his chagrin - and the fun starts there. Each episode sees Rizel attempting to get closer to an increasingly irritable Tomonori, and desperately trying to figure out what it means to be "a good wife."But let's talk technical for a minute: Rizelmine aired on Japanese television in 2002 with a run of 24 episodes, spanning two seasons, each episode roughly fifteen minutes long. When it first aired, it was met with controversy due to the nature of domestic violence it portrayed. Scenes where Tomonori physically abused Rizel were derided, even though they were intended to be comical. If you're looking for a nice family comedy, don't expect to find it here. Rizelmine constantly teeters along the tightrope of common decency, and there are subtle references to several lurid fetishes, including (but not limited to) paedophilia, beastiality and sado-masachism.And perhaps that's what I like about this series. It's not afraid to test boundaries and fondle taboos for the sake of a joke. Generally, it stays above board - I never felt like I was laughing at abuse victims, more that the comedy made fun of the characters, not their situation - and the unpredictability of the series means the punchlines are unexpected and hilarious.However, as with the majority of romantic comedies in anime, there is little plot to speak of, though because of the length of the episodes, this rarely becomes an issue. The only problem I had with the story itself, however, is its unwillingness to tell us the why of events. True, we get an explanation for Rizel's seemingly irrational love of Tomonori, but it's never established why she's important to the government. If it wasn't for her absurd naivety, she could easily be a normal, non-genetically-engineered girl.AnimationI have to admit that it looks more stylish than other series released at the same time (like Kanon and Onegai Teacher), but it's nothing special. The setting is either in Tomonori's house or at school, with some minor setting changes. The saving grace is Rizel's super-moe character design - her costume, complete with huge discs that seem to be connected to her ears (another point never really explained) is one of the most interesting wardrobe choices I've seen in any series, period.My major gripe about the animation, however, is the disparity between the seasons. While the first season allows viewers a light spattering of fanservice, the second season becomes much more ecchi - nipples are added in bath scenes, where they were covered up before, and there seems to be double the amount of nudity and revealing costumes in the second season for no apparent reason. Call me a prude, but I don't particularly want to see naked twelve year olds on my computer screen.SoundTwo words: annoyingly cute. That pretty much sums up the music and the voice acting. If Rizel's so-high-only-dogs-can-hear voice doesn't grate on you after the first few episodes, then the ultra-cutesy songs probably will. The opening is ridiculously cute considering the subject of the song is sex (the song's title Shimashou! translates as "let's do it!") and the ending, while quite catchy, would be more suited to a Saturday morning children's show. The unfortunate thing is that these songs do actually fit with Rizel amazingly well and almost serve as character development in themselves. The ending to the second season is more mature, tender and reflective, mirroring the change to Rizel's character at that point - it's just a shame it's such a boring song!CharactersThis is where Rizelmine really picks up the marks. This is not your average romantic comedy, as I've already said, but here's why: the characters reach a heightened sense of absurdity that accentuates their originality. At the beginning of the series, Rizel knows nothing about the world, and the progression of her character is a measured one, with a lot of hilarity arising from her misinterpretation of whatever source material she has to hand (in a number of cases, shoujo manga). Tomonori Iwaki also isn't your average romantic male lead. He actively rejects Rizel on nearly every occasion she tries to get close to him, instead fawning over his teacher.The support cast are also a delight. My favourite of these are Rizel's guardians, known as Papa A, Papa B and Papa C, who spend a large proportion of their onscreen time playing mahjong and drinking. But there are others worth noting: Kyouko Yachigusa, a girl whose personality changes when she takes her glasses off; Ryunosuke Hojoin who has an obsession for panties with bears on them; and Aoi Seimoto who has an interesting relationship with a local dog. The characters are all fairly memorable and each one provides nuggets of comedy when they're onscreen.OverallRizelmine certainly has many flaws, and it's not the most viewer-friendly to fall into (to the extent where you surmise that only perverted Japanese men could create such a show) - yet, there's something special about it. Its brand of humour is undeniably original and if you can break through your own inhibitions, it will scrunch you up with laughter. Despite its lack of story, it does have a few plot-twists that come as a surprise, and its ending is fulfilling if somewhat easy.Despite its low score, I'd recommend everyone to at least give it a try, as it is definitely a series you either love, like I do, or hate with every fibre of your body. It allows you no middle ground, and I like a series that has the balls to do that.

Ok, the japs can be very sick if they want to and this is bordering comedy with crime. Although today we have lots of shows with little girls acting mature and in love with older men, back when this series was made, the shock was ten fold.So the story is about a typical male teenager TM who likes older women, being forced to live as a married couple with a 12 year old girl, just because she is in love with him and she will blow up if he rejects her. Because she is a robot… with emotions… that blows up if she is not emotionally satisfied… And that is the story… somewhat.Ok, I’m not going to try and make sense of any of this; the story is to the most part just an excuse to have a loli in the same bed as a teenager. Plus they are supposed to do naughty stuff but he likes only older women and she gets pissed and havoc breaks out and that is the whole reason the series doesn’t end right away. There is very little story in it and to the most part you think it’s just another storyless erotic comedy with pedo-borderline elements. Supposed she is a robot, supposed he is not interested, supposed popping your head like a spring or exploding every 15 minutes means anything at all. Yet in the last episodes all of a sudden you get a somewhat plot and seriousness and even a finale… a bold one. So it is not entirely without a story; it wastes a lot of time fooling around just for kicks. It is still very stupid and impossible to swallow but all things considered, there is a beginning, a middle and an ending. So I will be grateful and give the story the base score for covering the essentials. The characters are nowhere near special or memorable. In fact, most don’t even have a personality at all and the short duration of each episode does not help much. Besides the main duo, all others are poorly placed cardboards that hardly aid in something and even the duo is generic. The boy is the typical indecisive lead that has a bit more balls than usual, while the girl is a pedophile’s wet dream. Still, the flashback that occurs towards the end suddenly creates an actual depth of sorts that somewhat excuses them being as they are; even going as far as excusing them being together. It’s weak but it’s there. So once again I give the base score for at least trying to show something and even offering a catharsis of sorts. Animation and sound are nothing out of the ordinary. Bright colors, typical backgrounds, typical character figures and typical panties with bears on them. The little robot girls look like they jumped out of a date sim or something with all those weird accessories and bright colors, but they are otherwise average cuties. Although fan servish at its core, it doesn’t really overdo it as most do, yet never feels dull to watch either. Voice acting or music themes, ok, I hardly remember them; that counts as average again in my book. Well, enjoyment is easy to figure out based on all the above. Yes, it’s the base again. It’s a show that got stuck in the middle. Not too bold or wacky, not too smut or dull. Value is almost not existent, as this anime has really nothing special to offer. There are far more interesting or spicy shows out there revolving around the love between a man and a female robot (Chobits) or a man and a little girl (Kodomo no Jikan) or even plain old hentai with loli robots (Petit Roid 3).

I won't say much other than I do not like the way Tomonori was treating Rizel. It is abusive and I can not find any humor in that style of story. I do love the basis for the story but I wish the creator didn't make Tomonori a jerk. I was only able to watch to episode 2 so I do not know how long it goes on for and I probablly never will. 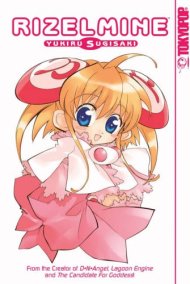