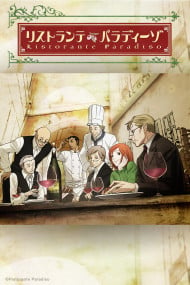 Located on a small street near the center of Rome, the Casetta dell'orso is a small yet popular restaurant staffed by a group of older, bespectacled gentlemen. Nicoletta is a twenty-one-year-old woman who has just arrived in Rome to meet with her estranged mother's husband, who owns the restaurant. She intends to inform him that not only was his wife married once before, but also that she is her daughter - a secret her mother desperately wants kept. When she arrives at the restaurant Nicoletta becomes enamoured with Claudio, one of the waiters, and begins to spend more time there. Despite the age gap, Nicoletta finds her feelings towards Claudio growing; and after making a promise to keep her mother's secret, Nicoletta begins working at the restaurant as an apprentice chef. Now she is trying her hardest to become a good cook, but can Nicoletta overcome the difference in age and win the quiet Claudio's heart?

StoryI remember when I was once on holiday in France, I was on a beach when, amongst all the pebbles and bits of sea-worn glass, I picked up what appeared to be a regular piece of flint. When I looked closer, I noticed that one side had a hole that was filled with tiny crystals; finding it made my holiday. I see each new anime season as being just like that beach. Wade through the excitement, disappointment and indifference, and if you’re lucky, you may find a lovely little gem of a series. For me, Ristorante Paradiso is my crystal-filled rock of the Spring 2009 anime season. Set in a small restaurant in Rome, Ristorante Paradiso centres on twenty one year old Nicoletta who has just moved to the capital. At first, she intends to meet with the owner of the Casetta Dell’orso restaurant and inform him that his wife is actually her estranged mother; however she soon yields to the charms of the quaint eatery and its staff of older bespectacled gentleman – and in particular a waiter named Claudio. Nicoletta then strikes up a deal with her long lost parent – she will keep her mother’s secret, if she can work as a trainee chef. With a young girl working in a restaurant filled with desirable wait staff, it may seem like the series should descend into little more than another reverse harem anime, but this is far from the truth. From its starting focus of the romance between Nicoletta and Claudio, the series soon expands into a rich and charming ensemble piece. The anime picks and chooses plotlines from the original manga as well as its three volume sequel, Gente ~ Ristorante no Hitobito~, to achieve a more slice of life route than its source. Rather than concentrating on the short and rather thin storyline surrounding Claudio and Nicoletta, Ristorante Paradiso fully explores its milieu and delves into the lives of its cast resulting in a more mature and comprehensive narrative, which is truly a treat to watch.AnimationUnderstated, grown-up and elegant, Ristorante Paradiso’s visual design echoes its gentlemanly cast. Resonating with the tone of its storyline, the series boasts a warm, yet muted, colour palette and a slightly watery quality to its imagery, which instils a sense of relaxation, romance and nostalgia. The characters’ large noses and wide mouths provide Ristorante Paradiso with a distinctive style, and while I personally like it, others may not appreciate it as much.SoundRistorante Paradiso’s upbeat, jazzy opening theme, ‘Marigold’ by Orange Pekoe, evokes the image of a bustling and trendy Italian café on a hot sunny day. Lisa Komine’s ending theme, ‘Suteki na Kajitsu’, reflects Nicoletta’s more naïve side, though makes less of an impression than the opener. In addition, the series’ voice cast performs particularly well. From Claudio’s dulcet tones to Luciano’s gruff vocals, Ristorante Paradiso’s seiyuu seem to effortlessly portray each character’s personality.CharactersAs the central protagonist of the series, Nicoletta receives the most character development. Throughout the show she gradually matures from an impetuous, naïve and unforgiving girl into a more focused, understanding and grown-up woman. Ristorante Paradiso demonstrates this transformation through not only the awkward relationship with her mother and her connection with Claudio, but also through her work at the restaurant. Nicoletta also serves in part as a proxy for the audience, her slow seduction into the world of the Casetta Dell’orso mimicking that of the viewer. While Nicoletta’s progression is notable, it’s the attention that the series accords its supporting cast which allows Ristorante Paradiso’s characterisation to really impress. Each person takes centre stage in at least one episode allowing Nicoletta, and thus the viewer, a chance to understand them that little bit better. Ristorante Paradiso leaves no character undeveloped or unexplored, therefore the cast as a whole feels complete and becomes more engaging.OverallWhen watching this series, I get swept up in its gentle rhythm. Ristorante Paradiso doesn’t rely on a bright colour palette, wacky characters, or any other tricks; its quiet nature needs no superfluous decoration. So sit back and relax, and maybe you’ll find yourself agreeing with the old cliché that, like a good vintage wine, men only improve with age.

Story: It is about a 21 year old woman, Nicoletta, who uproots herself and goes to Rome to meet her estranged mother's husband who owns this cute and quaint restaurant. She is determined to tell him that her mother has been married before and has a daughter that she has been keeping a secret from him. When Nicoletta arrives, she becomes smitten at one of the waiters and continues to spend time there in order to catch his attention. Eventually, she begins working at the restaurant as an apprentice chef and hopes to win the heart of the waiter who is several years older than she. Animation/Art: The anime is of an unique artistic style. It is like watching an art gallery in motion. The artwork itself depicts certain landmarks that Rome actually has, making it more appealling visually and gives the lure of romanticism. Though the anime isn't of vibrant colors, it is still crisp and catching to the eye, especially the various scenery backdrops. As for the characters, they too are uniquely drawn yet compliment the anime itself as a whole perfectly. Sound: Ristorante Paradiso’s upbeat, jazzy opening theme, ‘Marigold’ by Orange Pekoe, entices the imagery of a bustling and trendy café on a hot sunny day. Altogether the sound resonates perfectly with this type of anime with a little touch of European flaire. There were parts where the sound underlined the scenary beautifully and fitted the situation as needed. Characters: Nicoletta receives the most character development out of the many characters illustrated. Throughout the show, she gradually matures from an naïve and unforgiving girl into a more understanding and grown-up woman. The anime demonstrates this change through the estranged relationship with her mother and her connection with the waiter, but also through her work at the restaurant. The anime does a fine job centering each character in the spotlight in at least one episode allowing Nicoletta, and thus the viewer, a chance to understand them that little bit better. It leaves no character undeveloped or unexplored, therefore the cast as a whole feels complete and becomes more engaging. Though, I feel like the chemistry between Nicolette and the waiter was a bit hindered because of cramming so much into an 11 episoder. Overall: Ristorante Paradiso is a sweet and warmhearted watch, especially when indulging upon the scenery of what Rome consists of. If you can get past the age gap difference, I recommend watching it, even if it is only for the unique artwork demonstrated.

A nice relaxing anime with an interesting twist. I can honestly say this is the only reverse harem I've seen that features older men. I was worried it would be about lecherous old men drooling over a young woman, but it wasn't. If anything, the men are portrayed as sex objects more than the women! It is romantic in a unique way, and the plot is actually quite interesting. The food isn't quite center stage, and it is more about the main character getting her life together. The ending gives me a good sense of closure and leaves with with a warm and fuzzy feeling. 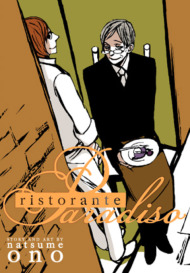 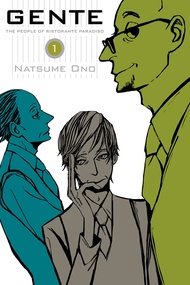 Gente: The People of Ristorante Paradiso