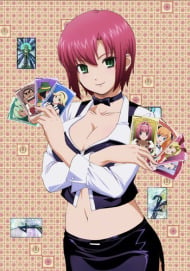 In the mood for some good old-fashioned gambling fun? Head on over to Howard Resort, a famous entertainment destination that's home to the voluptuous, and said to be lucky, dealer Rio. Alongside other casino dealers and staff such as the clumsy Anya and bunnygirl Elle and Ille, Rio helps tend to the whims of the resort's customers. With Mr. Howard constantly forcing her to wear more and more skimpy outfits and even a ghost tinkering with the hotel's plans, it won't be easy! Especially since Rio is the holder of a very special card known as a Gate – a card that other dealers of the world want desperately to acquire, as only then will they earn the title of Most Valuable Card Dealer...

I finished Rio: Rainbow Gate! for April's Monthly Marathon, when otherwise I wouldn't have watched it unless I wanted something sleazy, perverted and filled with fanservice with no redeeming value. I had my pride on the line after saying I would watch this and I question if it was worth it. I admit that I got some enjoyment out of it, guilty enjoyment but overall it was crap. I guess I should start with the story, so here goes: Rio needs to get 13 gate cards to become the MVCD, Most Valuble Casino Dealer. Smash boom pow, there you go. That's essentially it. Everything else is just there to use up time. From the stupidly absurd gate battles that sometimes don't have to do with casino games to fanservice shots. There is gambling, of course, but more importantly are the gate battles, where two gate holders duel each other in some absurd, expensively produced battle with sleazy clothing. Or clothing that at least has clevage for those who can flaunt it. For example, the first one is a giant roulette table fit with a bowling alley and a complex tube set. A water slide like thing, if you will. At the beach. On an island. Owned by the Casino. It was used just for that battle. Just for that. But it gets more extravagant; from a (What appeared to be) partially gold-plated car to gold plated slot machines and a fricking flying casino. I'm sure if it's a shiny yellow, it's at least gold plated because Howard (The Manager of the island and Team Hot Dealers) could have a house made of gold and still have enough to outfit his casino in jewels. It's a giant casino, yes, but the dealer is called The Goddess of Victory, because she can alter the luck of others for the better. The casino should lose wagon loads but it rolls in the dough. And don't get me started on the cards themselves. When one gets all 13... dear God. And you know who gets them so no surprise there. What is is what happens when all 13 are in one's possession. Not spoiling that crap. For all the hate, there are some half-decent moments and moments where I may have laughed or chuckled. But I can't argue against the facts of the main stuff upfront; the boobs gate cards. For once, partial comedy isn't a saving grace in the score. Fortunately animation is next, which is shiny and packed with blush. Cleavages blush as much as the cheeks -face cheeks- and there's plenty of it. If a girl has a decent size, it shows. Mostly. The clumsy girl is a surprising exception, considering what all the others wear. It's sleazy but it's fanservice and a casino. Heck, that's the reason! The reason for women to dress skimpy and flaunt what they got! That's some bonus points right there. Otherwise, they bounce, they jiggle and there are literal cleavage shots where that's all that's on the screen and a few booty shots to mix it up. The clothing stlyes and the boobs are at the forefront and are first and second in animation. Unsurprising, as this is one of it's selling points. And of mention is Mint's eyes. Cool and slightly freaky. The music is alright but wasn't the biggest of fans of the OP/EP. Might be because I skipped it but either way, probably wouldn't remember them by now. Though I have to give it some credit for the beginning, where it had a bit of a jazzy sleazy tune to Rio's sleeping body. Extra pervy but memorable in that. Roll Rulers. They control luck and their surrounding's visuals to their opponent in gate battles. Or in regular gambling stuff for the former at least. It's... odd. Refraining from using stupid as it's both interesting and ridiculous at times. It's what Rio and a few others have and it does add some spice. Good or bad spice is up to the unfortunate viewer. But I must admit, this had some character development that went pass my expectations. I was floored at the amount of development for a few (Two) of the characters! Which is to say I expected jack. Nonetheless, it's predictable and it can last quite a while. Integral to the plot, I'm sure but not what you came here for. Other characters that get screen time, one shot villains for gate battles, are amusing and overblown. Overblown in a good way, in that they're generic and... I don't know the word but it's something. Gave'em points for some of them being amusing and for the manager on being upfront on his perversion. But his perversion doesn't move into the leacherous old-man/groping territory, which is a big plus. The characters score is a bit... iffy but overall, it too, is unimportant. This probably isn't worth your time and if you want something fanservicey, there are better options. But if you somehow have nothing better to watch, you can certainly do a lot worse. Expect the expected and don't pay attention to the story. That's there to get the fanservice moving along. You should have some tolerance for the absurd, as that would help. And chicken wings. Those were nice. 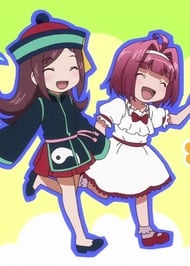