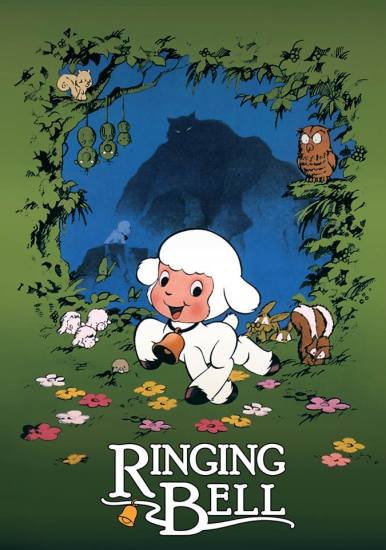 As a child, Chirin the lamb is taught by his loving mother to be wary of leaving their pasture; wolves and other predators are a constant threat, though the naïve Chirin believes they would never eat his kind. But when a wolf breaches the perimeter and kills his mother while she protects him, Chirin decides he must do the unthinkable: find the wolf and demand that he trains Chirin to be strong. Chirin must undergo rigorous conditions and be the very thing that he despises so that he may have his revenge, but will he lose himself in the process?

StoryAs an adult, I have vivid memories of watching Bambi as a child; while I loved the animals, I was always uneasy with the part where Bambi's mother is killed. Watching Chirin no Suzu is similar to watching Bambi in that it begins with the death of a parent; but unlike Bambi, Chirin is a take-charge, no-nonsense soul who will stop at nothing to become strong and avenge his lost loved one - to a fault. And that in itself makes Chirin no Suzu the more compelling - and disturbing - tale. Chirin's story begins innocently; he lives a carefree life with his mother and the rest of the sheep herd, and is taught important lessons such as never to leave the perimeter of the fence in fear of wolves. However, some time later, a wolf attacks at night and kills Chirin's mother while she tries to protect him, leaving Chirin grieving and angry. He quickly sets off to find the wolf, and when he finds him, Chirin demands that it teaches him to be strong; and thus Chirin's new hardships begin.Few motivational or inspirational words can be said about the remainder of the film; it's dark, it's depressing, and it's relatively free of hope. We watch Chirin struggle from coping with his mother's death to trying desperately to earn an apprenticeship with the one who killed her - this is painful, to say the least, and without spoiling I'll say that the ending will not make you weep with joy or feel warm and fuzzy inside.And really, what it boils down to is that while Chirin no Suzu might appear to be a family-friendly film, there's no way I'd show it to a child. In addition to the depressing tone and sad ending, there are a number of brutal sequences that I can only imagine would terrify the kiddies: various animals are slaughtered by wolves and a bird is crushed in the jaws of a snake, among other scenes. Mentally-strong children may be able to handle what they see, but it's more likely that older fans would appreciate Chirin no Suzu for what it is: a tragedy. Finally, on a technical note, Chirin no Suzu's pacing is consistent - not too fast or too slow - and accompanying the usual dialogue is a narrator who explains both the passage of time between Chirin's child and adult self, and wraps up the tale in a saddening tone. Like other moral-heavy childhood stories, Chirin no Suzu's choice to include this narrator helps make the story that much more impactful. AnimationRather than displaying complicated backgrounds with a broad spectrum of colors, Chirin no Suzu instead opts for a minimal palette and solid, simple backdrops. Silhouettes and shadows are often used to represent the wolf, and blizzards or night fall often obscure anything in the distance. Occasional scenes are poignant and moving: the young Chirin trailing the wolf across mountains and peaks; Chirin returning to his home as an adult; and the frightened look in the sheep's eyes when their young are threatened.  As Chirin no Suzu is a simple tale, its animation style fits like a glove. It was created in the 70s and thus has a dated appearance, but nothing is bad enough to be distracting. SoundThough fitting for the target audience and time period, Chirin no Suzu's soundtrack is undoubtedly dated. Each song is reminiscent of an old Disney film or Tezuka masterpiece, but little can be said above "simply average."CharactersFew characters are developed in Chirin no Suzu's short forty-five minute length; there's the relentless, brutally efficient wolf, the naïve and tragic Chirin, and as a minor character, Chirin's mother. Chirin's mother is easily the most likeable, and like watching Bambi's mother be killed, it feels equally as saddening to watch Chirin's mother fall under the teeth of the invading wolf. She only wants what is best for her son, and ultimately she dies because of it. Chirin himself, the title character, grows from being naïve and innocent to flat out hardened and frightening; this transformation is eerie, unsettling, and ultimately makes Chirin the subject of the most powerful character development in the film. By the end, we feel genuinely empathetic for Chirin's fate, and regret that his journey was not more healing and positive. Finally, the wolf: he is the epitome of a villain - cold, calculated, and vicious; but he also is an integral facet of Chirin's development. The two develop a unique relationship that is somewhat chilling to watch. I can't say much more about the character development without spoiling; let me just say that the dismal and crushing results of the characters' journeys is the strongest reason to watch the film - assuming you like tragedies. OverallChirin no Suzu is dark; very, very dark. While certain movies aimed at children have happy endings or positive morals, Chirin no Suzu is a downright tragedy to the end. With the exception of the first few minutes, it starts sad, it ends sad; if you are like me and appreciate a good melancholy journey, you'll appreciate what Chirin no Suzu has to offer. I'd highly recommend against showing this to your children, though.

I was given this as one of my Secret Santa recommendations, and it turned out to be a little gem! Story We start off with a young Chirin, frolicing through the fields and generally enjoying his happy little existence with all his other critter friends, at night he returns back to his mother where they sleep together and the next day he starts his little adventures again, warned never to go past the perimeter fence for fear of the Wolf. Unfortunately, the Wolf doesn't care about fences and one night, kills Chirin's mother as she tries to protect him. There's reminescences of Bambi from the beginning to this part, but that's where any comparison ends, because the Wolf isn't a faceless hunter never to be seen again, he has a domain, he has an agenga, and Chirin wants in. What we actually have here is a tragedy, what happens from this point onwards is nothing other than pain, Chirin wants to be Wolf's apprentice, and become strong so that he doesn't just exist in his field and wait to die, he wants to be strong enough to defend himself and others, so he seeks out the wolf for training. We get a time skip after a short montage of this training, and then we see Chirin the Ram, a killer as heartless as the Wolf himself. The story has some morals on revenge, and why it is an inherently bad thing, but also talks about how having strength with no purpose is also bad, Chirin has no happy ending here, just a series of bad things that either happens to him, or that he causes himself, one such scene is where we see a snake kill a bird by shaking and crushing it in its jaws, Chirin tries to rush and protect the eggs, biting the snake and wrestling it from its branch to the floor, only to see that he smashed all the eggs in the process. This acts as the turning point for Chirin, from this time on he has no hope. Animation For a show made in the 70's, this doesn't look to bad to me, sure I've seen some better backgrounds done in shows made around the same period, but when you consider how hard it is to animate an animals movement and express it without it feeling completely unrealistic, you realise that they actually did a good job here.  Chirin as a lamb is decidedly animated, his movements are lively and springy, always on the move, the Wolf walks with the slow gate that any owner of a large dog would recognise. All together, it makes for a quite a good visual to sit through. Sound Probably the shows major weakpoint. Classic Disney like songs that are almost trying to shove the moral of the story down your throat, and the BGM was forgettable, it wasn't unlistenable, bbut it was incredibly average. Characters Definitely quite one dimensional here, but that's not necessarily a bad thing, they set out to tell a simple story in 45 minutes and they achieved it. Chirin's growth from naive youth to bitter adult works well, as does Wolfs consistent bitterness with the world. The only other real character is Chirins mother, who acts like almost any other mother character in any other show. It works though. Alltogether, I'lll give the show a 7/10, it sets out to achieve something and succeeds, I guess chirin can come across as pretty edgy as an adult, and if that kind of thing really annoys you, maybe you shouldn't watch this, bubt on the whole I feel it's worth watching. It's certainly not the familt friendly watch I was expecting, at any crossroads where they could go down the darker path or the hopeful road, they always choose the former, it makes me wonder about the original author of the novel, whether they were embittered like the Wolf, or a ccynic like Chirin. Either way, this was a pretty dark tale to tell about a Ram.

I bet you saw this movie thinking it would be some light-hearted children's film, something like Unico, right? Well, you're in for a surprising twist... Jist: Chirin starts out as a cheerful lamb whose main concerns are eating clovers and frolicking in grass. However, when his mother is killed by a wolf without pupils, he sets out to break the laws of nature and become an apprentice of his mother's murderer, hoping to get revenge one day. It is quite the transformation is all I'll say...from this tiny lamb who can barely climb, to a demonic beast that's neither wolf nor sheep. This absurd plot did make the movie more interesting than I imagined. Most of the time I was wondering how many toddlers watched this and were scared to death, so I can't say that I was totally bored either. Verdict: If you are truly looking for a good movie to watch with similar characters (wolves, sheep), I recommend Arashi no Yoru ni, a much more well done movie in about every aspect compared to this. If you want to see just how strange Ringing Bell is, go check it out and I'm sure you'll agree it's pretty wack.