Alt titles: Kyoukai no Rinne, Rinne of the Boundary 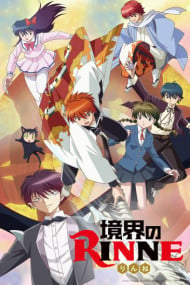 At first this gets to a slow start you dont really know whats going on. Then at huge speed you get hit with the plot. There is tons of moments you want romance to occur, but its seems there are block head moments here. Its packed with funny moments and great story lines. It always leaves you with the feeling I CANT WAIT TILL THE NEXT ONE

Kyoukai no Rinne has nearly the same premise as one of the best TV shows of all time. It is a slice-of-life comedy about a dirt poor teenager who has to balance everyday life with the demands of his job as a shinigami. If you don't know, I'm talking about Dead Like Me, a show about a dirt poor teenager who has to balance everyday life with the demands of her job as a grim reaper. In fact Kyoukai no Rinne is almost exactly the same as Dead Like Me... ...minus the memorable, well-developed characters... ...the overarching intrigue... ...the interesting themes... ...the masterful comedy... ...or pretty much everything that made Dead Like Me great. If you couldn't figure it out from the previous paragraph, Kyoukai no Rinne is trite, derivative, banal, and a waste of a perfectly good premise. But why does it fall so flat? While they share the same plot, Kyoukai no Rinne is not trying to be Dead Like Me. Its significantly lighter tone permeates through much of its themes and delivery. Having a lighthearted tone is perfectly okay but Kyoukai no Rinne doesn't seem to do anything with it. Many times, it feels lke the whole shinigami business has no bearing on the plot and is just used to provide a flimsy justification for the characters to interact. Additionally, the show has a terrible habit of telling, not showing. The incessesant narrator is incredibly obnoxious and redundant, often repeating obvious facts about the world. (I know what the Haori of the Underworld is and what it does, you don't have to remind me every time Rinne puts the f**king thing on.) The comedy is stale as well, often you will hear the narrator explain the joke to you as a reminder of when to laugh. I guess this was "helpful" because I couldn't tell when the show was trying to be funny. Considering the lack of an engaging plot, the stale humor, and the nonexistant subtext, are the characters able to pick up the slack? Short answer: no. Long answer: nooooooooooooooooo. In all seriousness though, Kyoukai no Rinne's characters are probably the worst thing about the show. I could forgive the poorly written episodes and much of the show's shortcomings if the characters were at least intersting to watch. They aren't. Most of the main cast is recycled from Inuyasha and those that aren't are still boring. I honestly couldn't tell you much about the characters as they left only a minimal impression. I guess you have the main character Rinne, whose biggest defining trait is that he's poor. The emotionally dead Sakura who has the power to see ghosts but has zero agency or motivation. There's the deadbeat dad who is utterly deplorable (I wouldn't be surprised if the writer had daddy issues). And... there's the Shippo clone, I guess. He's poor too. There are others too but they only exist as character love-interests, pointless rivals, or living gags. The only character I will give a pass to is the grandmother. She's a good balance of quirky yet in-control. The anime tries to be a romance too but the characters' chemistry mixes as well as oil and water. There's not much to say about it. It exists, but since it's so poorly executed and forced, it's best to not even bother. Rinne likes Sakura because... I dunno. Tig 'ol Bitties I suppose. Some ditzy rich girl likes Rinne because love triangles and stuff. Sakura likes no one because she is a sociopath. And that pretty much sums it up. Listen, if you enjoy this show, more power to ya' and it is not my intention to insult YOU personally. But I did not like Kyoukai no Rinne, every minute I spent watching it was slow and arduous. If you want something with a similar premise but executed very well, watch Dead Like Me (although it is not an anime). As for anime recommendations, you'd be better off watching Soul Eater: Not.

<section class="userContent">Right, it's confession time for me. If you have been reading my reviews than you may have noticed that I tend to rip the anime a new one. There is a reason for this though and it has to do with the fact that I can't turn my brain off when watching anime. I can't ignore the stupid shown in the anime and this is a problem as most anime are very stupid indeed. In this case I'm not talking about a 90 pound girl catching a multi-ton cruise missile and throwing it back. Yes, it is stupid but it is a stupid that I'll allow. It's anime. Things like this are normal here and I'm pretty much fine with it. It annoys me to be sure but I will not rant about it. So, having explained this lets rip into this anime shall we? Just a heads up: There will most probably be spoilers. The more I hate an anime the more spoilers there will be. ART: Art is fine. I've said it before and I'll say it many more times: It is near impossible to screw this up these days. SOUND: Again no complaints from me. I can no longer remember any of the music used but this is how I prefer it. Voice acting were decent even if they get to do the same thing over and over. CHARACTERS: Main character is Sakura. As a child she found herself in the land of the dead and has been able to see them ever since. While she got used to it she isn't very happy with it. Rinne is part Shinigami and part human. He has a massive debt due to his father and works hard for the afterworld to clear it up. Rokumon is a cat spirit that works for Rinne. Tsubasa is an exorcist and the last of a long line. He is an old friend of Sakura and has a crush on her. STORY: As a young child, Sakura, was brought into the spirit world and she has been able to see spirits ever since. While in highschool she meets Rinne, a mysterious boy that is absent for most of the time. When he does show up she is surprised that she is the only one able to see him. Rinne is part shinigami and as such can move among the spirits as will. Unfortunately he is dirt poor and has to work extremely hard to repay the debts. Sakura starts to help him. RANT: What I got the most of this anime is boredom. Nothing of note happens and nobody seems to care either and when the main characters don't care, why should we? This is the main problem with the anime: nobody cares. All the elements are in place and then the tension gets broken with a joke and everyone goes along with it. Nothing of concequence happens either. Things just happens and aren't resolved, especially involving Rinne's father. He is probably the main bad guy but nothing happens with him. I'm aware that this is on purpose and for comedic effect but just suck everything out of the anime. It would have helped if the comedy was good but most jokes are weak and the good ones are repeated so often that even that becomes stale. Then there is the exposition, mostly done the narrator. Problem is that he repeats everything and I mean everthing. Rinne uses a scythe? The narrator explains the use of the scythe. Next episode or 5 minutes later the scythe gets used again? The nerrator explains again what the scythe is and how it is used. </section> 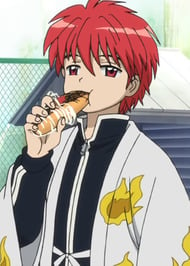 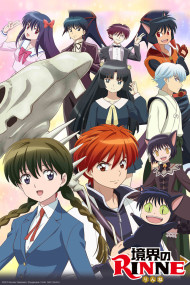 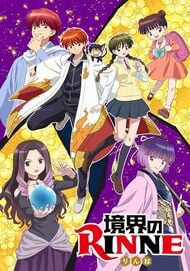 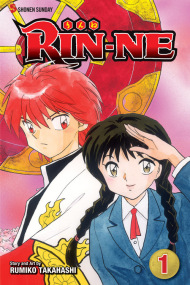