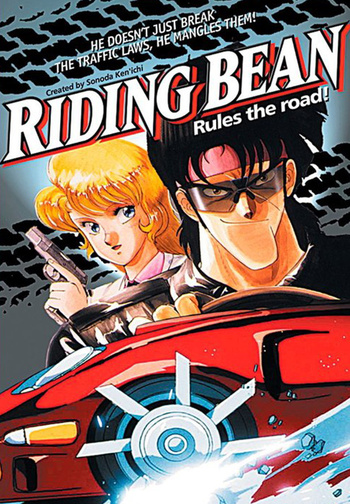 As a person outside of having to review the show, this show is pretty awesome for vintage anime and I truly injoyed it. As a reviewer… I have to nit pick. The problem with that is that the story is really very good and I believe it has the workings of becoming a whole series is the Manga-ka Kenichi Sonoda had not had a falling out with the studio. After the OVA was created, Kenichi created the manga and the manga ‘Gunsmith Cats’ where Rally Vincent was the star though her design was altered.

Anyway, going back to the story, it’s pretty awesome in how it shows the action scenes and everything. It feels like an American made movie more then just an anime with how many guns and vilence is in the show. It starts out with Bean being the get away driver for a bunch of thieves and then ends him being the hero of the show. It’s not making him an anti hero and has him as a regular guy getting money. He actually is rather strong, almost like Superman strong as he had picked up the front end of a car and also rammed his fingers into the metal door of the car to rip the door right off its hinges. Rally on the other hand doesn’t really do much in the show although she is a quick shot. The only thing I really noticed her doing when she didn’t have a gun in her hand was tell Bean to keep cool or try and take care of the little girl.

Going onto the cops side, the cops are damn idiots and Detective Percy should be placed into a mental hospital. Seriously, Percy is infatuated with trying to catch Bean at all cost and goes crazy when he thinks he can. He is the definition of a bumbling detective who gets into a hell of a lot of trouble but I guess I have to give him being smart enough to actually not get fired from his job. The cops don’t help the matter, always crashing into things or sounding like complete idiots or children as in the the small chant they do close to the end of ‘Bean, come out and play’ thing. And yet, in that all that’s said and done, it seemed to sort of fit to me.

The animation becomes really sloppy at some points, using many speedlines and odd movements that feel a bit stiff. The times that it doesn’t have these problems though, they are ether still shots or some very detailed action scenes. The eating habits are rather laughable though. It’s very exaggerated as though the animators had no clue how to show them eating so they slowed them down and made rather huge mouths. It becomes almost discusting at how they did it. Bean was designed rather interestingly with a little to large of canines making him look rather beastly.

The English voices are laughable at most, feeling mostly stale at the most intence times. It’s as though they were reading a script rather then playing the part. The words really don’t feel like they fit the mouth movements and sometimes the characters move their mouths when no one is talking. The only one that seems alright is Percy and he shouts almost every other sentence. The little children also seem to shout as though they can’t be heard any other way. Dispite that, the people that were picked to play the parts were actually what I would see for the type of voices coming from the characters. If they acted a bit more then shouted, it would have been even better.

I think everyone should at least watch this one once. Even with the flaws, the show is rather action pact and won’t leave you bored. Because of the flaws, the times that it does go into a slow pace, they feel a bit comedic and the script can be rather tounge and cheek at points.

The story is nothing new or original, but it is fun, fast paced and with plenty of action. The characters animation is just average, but the cars and city animation is very well done, the quality gets much better in those scenes. The art is also very charming. The sound is good, the engines feel real and the music funky. Overall I would recommend this to anyone who wants a good and fun time.

I have a really good feeling that back in 1989 the creator of Riding Bean was at the opening of Planet Hollywood Japan.

What were the financiers of the OVA thinking! AIC Productions has put out some of the best anime out there. Thankfully, it was the 80's so we'll have to chalk this up to practice.

This over the top, action adventure could be the precursor for "The Expendables". It brings out every Yin and Yang quality of a 1980's Hollywood action flick. From constant left and right explosions. To the over the top, indestructible character that is Bean Bandit,aka, 'The Roadbuster'. John McClane fan rejoice!