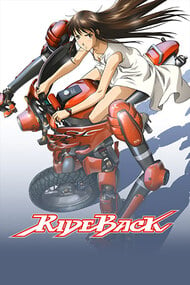 Amidst the turbulent revolution of 2025 wrought by the GGP government, Rin Ogata only dreams of becoming a ballerina; like her mother before her, Rin’s grace and agility mean she’s destined for success on the stage. However, an injury and the untimely death of her parents quickly shatter her aspirations and, for once, Rin’s existence seems purposeless. That is, until she enters the garage of a club one day and sits astride a RideBack! The RideBack, a motorcycle with arms and the ability to stand upright, offers Rin a new world of boundless movement! What she doesn’t realize, however, is that this club of RideBack enthusiasts is about to get dragged into the bloody war between the GGP and the terrorists intent on overthrowing them. Life may be more exciting now, but it’s also become very dangerous: will Rin’s natural talents as a pilot be enough in a world where racing is not just for glory, but for survival?

Action is the spice of life. This fact seems to have passed Ride Back by; instead it reworks the mecha genre – get this – with less epic awesomeness and a lot more teenage moping!!!1! This is indeed deceptive stuff that begins riproaringly well in the first episode with outstanding stunts that only the likes of MADHOUSE could deliver. Only to deteriorate rapidly into a plodding account of the main character Rin being very, very sad. Why is she sad? Because she misses her robot, which has gone off somewhere. Hell, many (excluding me) took issue with Shinji Ikari's (Neon Genesis Evangelion) intensely tortured journey through deep-seated insecurities caused by the lack of parental love in his life. What would those same critics make of Rin's endless weeping over the loss of her oversized toy? But yes, returning to the lack of epic awesomeness, here are the words I uttered in the forum upon seeing the first episode: "FUUUUUCK did you see that animation?... If the next three eps continue to blow me away the way this one did, I'll definitely follow the rest as it airs." Ride Back looks like someone took a million dollars, used up half on the first episode, then flushed the rest down the toilet. This is the kind of grossly elaborate monstrosity that never grows any teeth. The first episode is a series of stunts crammed together to form the biggest stunt of all - making you think the rest of the show will be just like that! Once the plot gets going in episode two the animation reverts to something very decent but hardly mindblowing. Too much promise, no delivery. Overall, a disappointing experience.

Ride Back had all the qualifications for becoming a great show. Amazing production values (Madhouse is the king of tv anime shows), lively characters, well directed racing choreographies, political intrigues, and a pilot episode that promised a dozen different side stories. And it made a complete mess with them because of lack of proper duration and naive storytelling. The story begins with the heroine Rin being considered a mediocre ballet dancer compared to her mother. In an almost stroke of luck, she finds a racing club in her university and drops ballet in order to delve into racing by using a new form of motorcycling called Ride-Backs. At the same time public unrest leads to various terrorist attacks happening around the world and the army plans to use Ride-Backs as a new form of weaponry in the upcoming battles. So this is the double story of a girl who chases her dream of beauty and grace by leaning how to ride properly a motorcycle that can transform to a robot, while all around her a war around terrorism takes place. It really sounds captivating and original.In practice though, the premise was simply too complicating to fit in just 12 episodes, plus various events were presented in a most light and eventually passable way. Most of the disbelief lies in how Rin is pretty much undefeatable while on her Ride-Back and no matter how dangerous or hard is the situation she gets into, she always comes out a winner. So imagine mastering how to ride properly in a few attempts or storming in a battle field, finding her friend, and taking her out of the dangerous area, while being shot at a hundred times without a single shot managing to hit her. It looks completely immature.If you see past the realism part though, the racing and battle choreographies are very well done. They are exciting in the way Ride-Backs can use their arms to maneuver properly or how they can use ballet moves in order to change direction or angle fast (and gracefully). Along with the mostly impressive production values, even during the simplistic slice-of-life moments, this is an easily enjoyable watch. Still, not even that is enough to eventually save face in the show’s inability to cover properly all its potential. There is simply not enough time to develop its characters or expose the setting to all it could have been. Rin’s dream to be a great rider is left incomplete, and so does the whole war against terrorism theme. What feels weirder than that is how the interaction of these themes makes them both look bad. Do you know how stupid it looks when hundreds of elite soldiers are owned by an unarmed rookie civilian? Or how ridiculous it looks to have girl trying to ballet using a motorcycle while entire buildings blow up around her? Despite the show’s attempts to look realistic or serious in its themes of racing or political unrest, it ends up being a silly children’s adventure with magical robots. And yes, they are magical since they have a lot of supernatural stuff going on around them, such as somehow choosing their riders or dancing their way out of trouble, even if their rider doesn’t directly tell them to do so. So even the lead robot Fuego ends up turning from an interesting and somewhat realistic racing machine into a (literal) Deus ex Machina that saves the day no matter what happens. This has the effect of trashing both the attempts of Rin to be a good rider-ballerina (because she doesn’t have control over the machine) as well as the whole social-political backdrop (because the military is unable to handle a civilian machine)."She is not fighting... she is dancing!"I was shaking my head while listening to this. Skip that; not even Rin is that great of a character even without Fuego stealing the spotlight. She is very dynamic for a girl but always does it in a most annoying way. Every time she sees something dangerous going on, she will immediately rush to intervene. Although that sounds a lot more interesting than just standing still, it looks as if Fuego does all the work, while she is yelling, or crying, or feeling helpless, or showing off her pantsu to whoever is behind her. She just loves to ride while wearing an inappropriate skirt. Gets annoying fast.The rest of the cast are just too simplistic to matter and the duration does not allow anyone to become memorable for any given reason. You basically get silly teenager stereotypes and cartoony military cop-outs talking and talking and supposed doing something that doesn’t matter because Fuego jumps gracefully and does things however it likes. Where is the interest in that? Nice attempt Madhouse but you seem to think that the only way to have slice-of-life and political intrigue in the same package, is by making a silly fairy tale. Didn’t work out well. 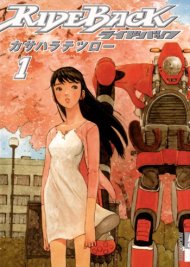 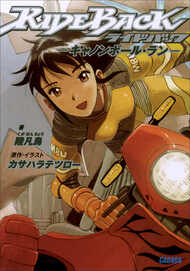