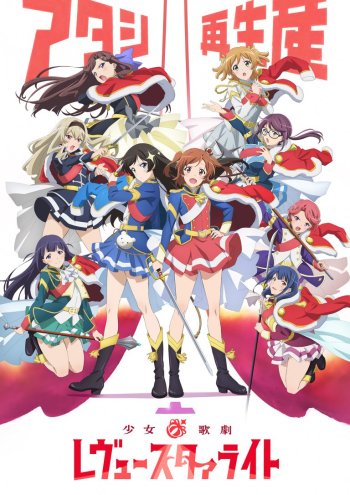 Both series feature a lot of performative elements, like songs, stage play elements, and dueling. Utena is far more transgressive, even to this day, but Starlight definitely has taken notes. If you want a show about odd school life with fantastic elements such as odd architecture, larger than life duels, and other forms of intrigue. Look no further.

Fans of either would do well to check out the other.

Similar battle set ups, both quite theatric. Also, both imply lesbian attraction (depending on if thats how you want to read it in the case of Revue Starlight). They also both have a repetitive pre-battle sequence.

There is no doubt in my mind that Revue Starlight was heavily inspired by Revolutionary Girl Utena.

The main stories of both focuses on the relationship of two girls, with a fictional play/fairytale that ties into the backstory and the underlying plot, and the reason for the duels. Said duels work on a metaphorical level as fights over ideals and philosophy, set to thematically suitable songs, while the combatants wear military inspired outfits.

The shows have similar settings, with a school hiding the fantastical stages of the duels, where magic and giant structures dominate. Both have alike cinematography and uses of symbolism. Further, in both shows there are odd and unexplained animals.

If you liked one and want more, you should certainly check out the other.

The looks too are similar in the fact that in both the "fighting" is dancing,And in other hand there's this feeling there's something more to that world we as viewers don't know about.

Both shows focus on the students of a school of performative arts, with a narrative about... well, the narrative. The characters rebel against the tragedythey are stuck in, as dictated by a story-within-a-story, which lends itself to meta-discussions about stories and fate. Both shows further have some mahou shoujo elements, Princess Tutu obviously more so. In both, the characters fight using dancing to convey their emotions. The characters generally don't react to the talking animals. If you like one, give the other a chance.

Common plotline: a magical talking animal lures teenaged girls into participating in battles (with weapons) by promising to fulfill their greatest wish, but neglects to mention that the deal has a catch. One character tries to stop another from getting involved after learning the truth. There are also time loops and a sacrifice used as a last resort at the end. PMMM is the darker of the two.

They are pretty much the same even the wish of the main character but revue starlight is softer without despair for anyone who don’t really want to be depressed but just emotional.

These shows have some visual similarities (though Yurikuma is much more eccentic). They both deal with past promises between two girls. They both feature a heavily female cast and deal with a strong bond between women.

Akko Kagari as a child watched the witch Shiny Chariot perform a show, and from then on dreamed of becoming a witch. She enters the Luna Nova Academy, a school for witches that Shiny Chariot attended. In this new town she meets new friends and starts a new school life. At the school she has lessons on riding brooms and the wonder of magic, but Akko and her friends Lotte and Sucy keep getting wrapped up in tumultuous events.

Both feature a plucky girl that watch to achieve her dreams despite not being the most ideal candidate. Both shows end up being much more than they seem from the earlier episodes.

Sora is a sixteen year old girl who has travelled to the US to join the Kaleido Stage, one of the greatest circuses in existence. However, as luck would have it, she arrives to the audition late, which almost costs her the chance of a lifetime. Fortunately, she manages to join the Kaleido Stage anyways due to the compassion of Kalos, the owner of the troupe. With the help of her friends and Fool, the perverted spirit of the stage who has the ability to predict the future, Sora will overcome trials and tribulations and she struggles to become the Kaleido Star.

Both Revue Starlight and Kaleido Star have supernatural elements working on the sidelines for a high-stakes performance arts setting, with a lot of symbolic competition and a main character who strives to be the best. Both have a lot of side characters who go through development. If you're a fan of one stage story anime, you'll probably like the other.

If you like shows with queer subtext and drama where kids sing about their problems at the end of every episode directed in an abstract style of storytelling where they face off against concepts, then these are the shows for you! Revue Starlight is directed by a protege of Ikuhara, and Sarazanmai is directed by Ikuhara, so it's not surprise they have a few similarities. Both shows are also fun for analysis, so if you enjoy one... that's also ripe in the other.

Tokaku Azuma is a heartless teenage assassin on a mission of death. She’s been sent to a prestigious, all-girls boarding school to compete in an assassination game against eleven other beautiful killers. Their heinous mission: send the innocent and cheerful Haru Ichinose to an early grave.

Love strong girls who fight for themselves?

Then you surely love the actions they bring in the shows.

Ruthless yet passionate,their main driving force towards their goals is within their hearts and passion.

The two share a similar narrative tone with equal doses of drama and comedy in an all-girls school setting. In both, stage performance is a major subplot, as are the themes of rivalry and predestination. Both also feature a character with a strong but one-sided attraction to one of the protagonists. While Revue Starlight isn't officially GL, it still has very prominent yuri undertones.

Like the Takarazuka Revue, the young women who go to the arts academy Kouka Kageki High School play all the parts of musical theater, be they female or male. Narata Ai is a jaded former idol performing female roles—her roommate, playing male roles, is bright-eyed country girl Watanabe Sarasa. From the school to the stage to the rest of their lives, there is no challenge these young women can't face with their passion for performance.

Both take place in an all-girls boarding school for stage performing arts. Kageki Shoujo is more down to earth and focuses on real life drama, whereas Revue Starlight is more epic/eccentric and has supernatural elements (as well as very prominent yuri undertones).