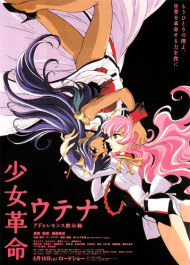 Utena Tenjou has just arrived at the prestigious Ohtori Academy, and not long after her arrival, she receives "the mark of the rose" and becomes a duelist. She is then thrust into a series of battles with other duelists to win her friend Anthy, who is known the Rose Bride. The winning duelist will not only receive Anthy, but also the revolutionary power that she holds! Utena must now do everything she can to protect Anthy while trying to figure out the secrets behind Ohtori Academy and the Rose Bride before it’s too late.

This movie truly is a masterpiece. No matter how many ways I look at it there is always something new to see; which is exactly what a multi-faceted masterpiece should be like. I have seen this movie about 15 times and everytime there were things I was noticing that I didn't before. The animation is simply gorgeous in this Utena outing. It is even better than the TV series, being a movie it should be no surprise, which in my opinion was pretty amazing. The colours are vibrant, the backgrounds are beautifully detailed, the artwork is gorgeous (I bought the artbook for this movie and the artwork is brought to life amazingly well). The character design is very accomplished and gives it the "get go" it needs in establishing itself. There is melancholy in everyone's eyes that I have not seen anywhere else before. Just a close up of a character's face tells a story of a thousand words and that's exactly what the movie needs as it aims for implied/symbolic rather than descriptive in its execution. The sound is equally well-executed in this movie and the imagery that goes with it is breathtaking. Toki Ni Ai Wa is just amazing with the motif of floating roses. The music is a bit more dramatic than that of the TV series but when you see what goes on in the movie it is just impeccable. Zettai Umnei Mokushiroku goes so well in the sequence it is that the scene does not feel disjointed or out of context. Instead it helps the flow of the story. The story, seemingly random, is the most complex one I have seen as it explores so much in a short timeframe. It is even more complex than the series when you take its length into consideration. You will have to rely on the placement of objects and the more direct symbolism (transformations, wounds, pace) to fully appreciate the story. In my eyes, that just makes it all the more unique and enthralling. The characters are probably the only aspect that is sub par in comparison other elements the Utena movie just excels in. Not to say that they are not wonderfully portrayed but to fully appreciate what they are going through; one must see the TV series. Because it is there that they are explored to their full extent. Here they are used as tools to drive the story forward as opposed to them being pushed forward. Overall though, they are still a majestic and solid cast that many anime wish they had. In addition they serve in pushing the story forward splendidly. All in all watching Adolescence of Utena is an incredibly rich experience as it opens so many doors of possibilities. It is one with the most value and enjoyment since you have to see it more than once to comprehend the full story. And this movie is quite a ride no matter how many times it is viewed. Plus the American release is filled with amazing extras such as a director's commentary, art galleries, scripts, behind the scene featurette and they can definitely help in answering some questions you might have about it. I highly recommend it.

Although I've only seen it once so far, the Adolescence of Utena seems to be an accurate summation of the themes of the show. The alternate expression of characters and setting encourages you to rediscover their world, but it also sets up the escape from the illusion. Hello, Princess Tutu! The fact that Utena reacts to Anthy's hypersexuality by saying  "you're weird"... If you thought that Utena was a perfect prince, simply because Anthy never argued over the way Utena treated her, then you're falling into the same trap that Utena herself did. Utena spends a lot of the series disregarding the signs that Anthy is being abused, even going on dates with Akio, and only accepts it when it's shoved directly in her face. Speaking of shoving people, she completely fails to apologize for shoving Anthy to the ground in this version. She says she's sorry, but because she felt better after unloading her problems onto Anthy, she reimagines that night as a positive experience.I really like how Anthy is reimagined here-- She still doesn't feel as if she can tell Utena her feelings directly, but she does make her will known from the very beginning, interrupting Utena and making her uncomfortable when Utena has made her uncomfortable by asking invasive questions. If you've seen Black Swan, picture the scene where the director tells Nina "I want there to be no boundaries between us." That's the level of fucked Utena is being. The fact that Anthy reacts to this in a direct enough way that Utena can understand, but still subdued, helps express her character while also moving the plot forward by helping Utena to empathize with Anthy more. So yeah! I'm into this movie. I had to subtract half a star due to the fact that my favorite character only appeared as a cow, but I appreciate the return to Utena's bizarre sense of humour. "Nanami isn't the world slap champion in this, because Nanami doesn't exist."Massive props to both Akio doing splits over the hood of a car, and "You thought you were the only one who could turn into a car?" 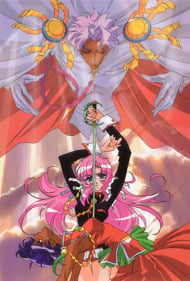 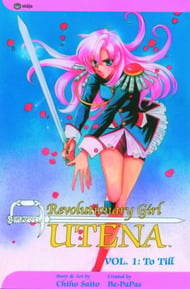 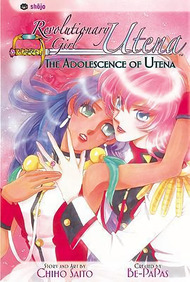 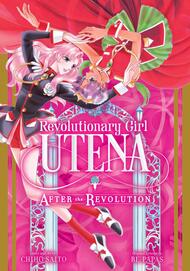 Revolutionary Girl Utena: After the Revolution